I love comic books and graphic novels. The pure joy and bliss that I receive upon reading a great comic is fantastic. Some people may think that I am a bit of a geek for enjoying this wonderful form of literature; well, they’re right—and I’m proud of it! If you are a comic book fiend as well, let it out. Don’t be afraid of what popular culture may think. Wear your X-Men t-shirt with delight. Discuss the ongoing dynamic of the Avengers with those who don’t care. It’s your passion and you should take full advantage of it.

Likewise, if you are in any way similar to me, or if you are just looking for a good read in general, you are always on the prowl for new graphic novels or comics to enjoy individually and then badger others about. There are some excellent ones out there that should be taken in a sincere light as serious literary fiction. I am going to provide a list of what I consider to be my top five science fiction/fantasy graphic works in no particular order. These allow for an exorbitant amount of morally inquisitive themes and concepts as well as a way to convince the geek-haters that what we read is not all that bad. So, my beloved nerds, let the fun begin: 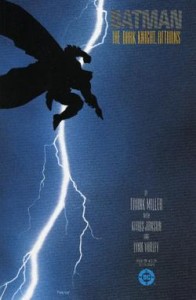 Mark Thwaite writes about this fantastic graphic novel in his Amazon.com editorial review:

The Dark Knight is a success on every level. Firstly it does keep the core elements of the Batman myth intact, with Robin, Alfred the butler, Commissioner Gordon, and the old roster of villains, present yet brilliantly subverted. Secondly the artwork is fantastic–detailed, sometimes claustrophobic, psychotic. Lastly it’s a great story: Gotham City is a hell on earth, street gangs roam but there are no heroes. Decay is ubiquitous. Where is a hero to save Gotham? It is 10 years since the last recorded sighting of the Batman. And things have got worse than ever. Bruce Wayne is close to being a broken man but something is keeping him sane: the need to see change and the belief that he can orchestrate some of that change

It has been quite some time since I have read Batman: The Dark Knight Returns, but as far as sophistication among graphic novels, this one sure makes the grade. The vigilante, Batman, returns as an old man and will do whatever is necessary in order to clean up the streets of Gotham City. He’s not holding back anymore, and this becomes evident in a pivotal scene in which Superman himself must intervene and try to apprehend Batman; unfortunately for Superman, this turns out to be a mistake. The question becomes, is Batman justly taking matters in to his own hands, or is he becoming the “evil” he has been fighting his whole life? 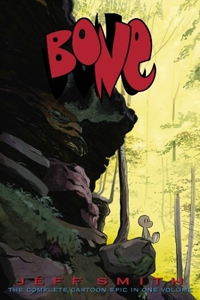 BONE is an epic adventure story, examining the role of the reluctant hero through a fantastical journey. Time Magazine writes:

BONE combines the humor and look of early Disney movies with the scope of the Lord of the Rings cycle. While children will read BONE for its breathless adventure and sight gags, older kids and adults will appreciate the themes of blind fanaticism and corrupting power.

Fone Bone and his two cousins, Phoney Bone and Smiley Bone, are exiled from their home, Boneville. Upon trying to find their way away from home, they meet interesting creatures, villainous individuals, and find themselves at the center of an age-long war that they had previously known nothing about. BONE offers a lighter side of the prospect of “good” and “evil,” allowing the reader to find a clear cut answer but be highly entertained as well. 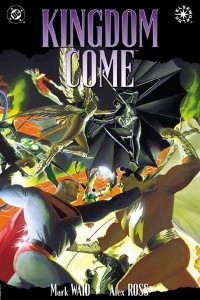 In her review of Kingdom Come, editor, Hillary Goldstein of comics.ign.com explains:

When Superman hung up his cape to make way for a new, more reckless generation of heroes, his peers followed suit. Today’s heroes are almost indistinguishable from its villains, putting innocents in harm’s way in the midst of battle, killing instead of subduing, and reveling in their power.

This graphic novel is an amazing contribution to the gritty, dark evolution of the superhero genre. In this story, the superheroes of the past, i.e. Superman, Batman, and Wonder Woman, must deal with the new progression of heroes who use violence and intimidation to stop evil and suppress the world. The heroes of old must come to their own conclusion as to which side is right and save the world the way they know how, or join the future of “superheroes.”

The Walking Dead (2003) by Robert Kirkman 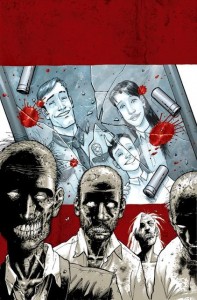 The Walking Dead is an ongoing comic book series about survival. After a zombie apocalypse ravages the world, a group of survivors band together in order to stay alive. The great thing about this book is that not only are the characters trying to keep themselves alive in a world infested with zombies, but they must also learn to live with one another. The idea of “humanity” truly comes into play as characters begin to do whatever they need to do in order to live, and sometimes, their actions may not resemble humanity in the slightest. Publisher Weekly states that The Walking Dead is “Taking a well-worn genre—flesh-eating zombies overrun the world and the unlucky surviving humans must deal with the gruesome aftermath—and approaching it from a purely character-driven point of view propels this series into the spotlight from out of nowhere.” 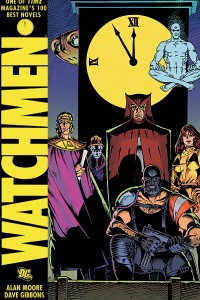 Watchmen tells the tale of retired, masked heroes who are individually being wiped out by an unknown assailant. As these “heroes” are forced to return to a life left behind, the question of whether or not taking the law into their own hands is morally acceptable comes into play. Are they heroes or vigilantes? In his Amazon.com review, editor, Mark Thwaite, writes of Watchmen that the brilliant graphic novel:

…concerns a group called the Crimebusters and a plot to kill and discredit them. Moore’s characterization is as sophisticated as any novel’s. Importantly the costumes do not get in the way of the storytelling; rather they allow Moore to investigate issues of power and control.

There you have it, folks. Read these works and not only will you be satisfying your own comic book cravings, but you will also have enough ammo to annoy others with your ramblings for at least a good three hours or so.