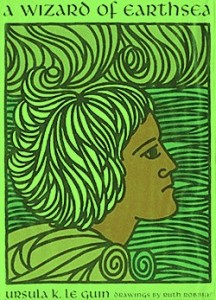 At the conclusion of the novel, we find Ged chasing the shadow through various islands; apparently it has transformed itself into a figure closely resembling Ged himself, as others commented on seeing him cross their lands only days earlier. On his journey, the Sorcerer receives a new boat and the aid of his friend, Vetch, who forsakes his charge as magic-worker of his home island and accompanies Ged on his quest to stop the shadow.

After a perilous voyage into unknown, and landless, waters, Ged finally reaches a mystical shore, where the sea has turned to land,  to confront the shadow-being, which is in effect the darker version of himself. The two rejoin, and all is well for Ged, Vetch , and Earthsea.

The central conflict is one that resonates throughout society in general: how does humanity, as a race, deal with its darker side? The story is really about Ged overcoming his hubris and ambition to become a great sorcerer. His actions and indecision remind me of an episode of the original Star Trek, The Enemy Within, where Kirk is split into two versions of himself: a “positive” half and an “negative” half. In reality, the positive half is hampered by his lack of ability as it does not possess the drive and determination that are inherent to the more violent negative part. Conversely, the negative Kirk cannot function without the reason and compassion found in the positive.  Neither are able to exist without the other.

Ged’s lack of determination to chase the shadow, along with his fears and self-doubt, echo this concept. Only when we can accept the entirety of out nature can we be as strong as we truly are. This can be echoed in Christianity as well. Without acknowledging that we are sinners, and embracing that aspect to our nature, we cannot truly understand ore exist with God’s spirit. Can a person who does not believe they sin truly appreciate the sacrifice that Jesus made for all? Alternately, a person who wholly accepts their sinful nature and believes that good deeds are not necessary to lead a spiritual life because their sins have been absolved through Jesus neglects an important tenet of the Christian faith: to emulate out Lord.

Ged’s power is illustrated in his final conflict as well, and we see how strong he can become by accepting his negative side. When the two finally meet in the open ocean, it turns to sand, and land is made from the sea. This concept was discussed earlier in the book, as the Archmage (I think) told Ged that it is impossible to shape things of which you do not know the name. Here is Ged in an area that he probably has no notion what the name is, and yet to his subconscious will it shapes itself into what he needs it to be. Truly, as we may see in later books, Ged is a powerful magician indeed.

Lastly, I want to apologize for the lateness in this post. I hope this has at least given many of our readers a chance to catch up with the book. Please leave your comments below, or if you are catching up, feel free to go back to previous posts and comment there. All can be found under the tag Read-Along.

Have a wonderful week!

One comment on “A Wizard of Earthsea Read-Along Part 4”