Recently, Nathan Fillion tweeted this picture from a get-together at Joss Whedon’s house: 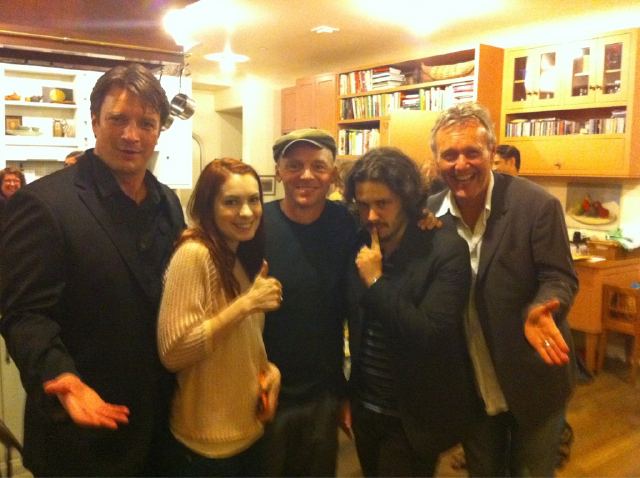 Now, the picture alone should make any science fiction fan faint with excitement, but I intend to express my theory about the amazing possibility of this incredible photo.

First of all, Look at the hands and facial expressions of both Nathan Fillion and Anthony Stewart Head. There is a suggestion of wonder and mystery enveloped within their body language. Next, take a look at Edgar Wright. The raised index finger to the mouth brings a sense of secrecy to the table. Now, examine how thrilled Felicia Day seems, thumb up and all, while Simon Pegg is simply smiling.

Finally, think about whose home they are in: Joss Whedon’s. Joss Whedon is not only the director and writer of the upcoming Avengers film in 2012, but he also rewrote the recent Captain America movie. If Avengers does well, he will surely have the option of directing a sequel. This all gives him some serious pull at Marvel’s studio.

Edgar Wright is slated to direct Marvel’s upcoming Ant-Man adaptation. For the past couple of years, the blogosphere has run abuzz for Nathan Fillion to portray Henry Pym, aka Ant-Man. I believe that this could be a sign and hint of things to come for the Ant-Man movie with a possible supporting cast. For everyone’s sake, let’s hope my theory is correct!

7 comments on “I Have A Theory”