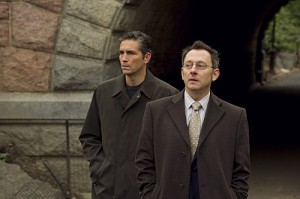 Despite multiple genre connections in its credits—executive producer J.J. Abrams (Lost, Cloverfield, Star Trek, et al.—you know the man), creator Jonathan Nolan (co-writer of The Prestige and The Dark Knight with his brother, Christopher), and co-star Michael Emerson (Lost’s Ben Linus)—CBS’ new drama Person of Interest (debuted September 22) isn’t hawking itself as a science fiction show. That’s probably wise, given the network’s core, decidedly mainstream audience (The Big Bang Theory notwithstanding, which is arguably more for “outsiders” than “insiders,” no matter how many times Wil Wheaton guest stars). Its pilot episode proves, however, that Person of Interest could lay claim to a science fiction label if it wished.

James Caviezel (The Passion of the Christ, AMC’s The Prisoner, and let’s not forget Frequency) stars as John Reese (at least, that’s the name he currently prefers), a poor, homeless, ex-CIA operative who’s been drifting around the country avoiding multiple arrest warrants. Reese suffers from survivors’ guilt: not only did he quit the CIA in order to be with his lover, Jessica, just before 9/11, but also he was (for reasons yet to be revealed) “halfway around the world” when Jessica was killed. Reese gets a chance to redeem himself when Emerson’s enigmatic Mr. Finch recruits him to help stop crimes before they happen.

Finch has his own 9/11 issues. When the attacks occurred, he was so busy making money he didn’t even know the World Trade  Center had fallen until that night. To help prevent future attacks, Finch created a computer for the government that tracks the entire population. “The machine is everywhere,” he tells Reese, “watching with ten thousand eyes, listening with a million ears.” From its omnipresent electronic surveillance, The Machine (you can all but hear the capitalization in Emerson’s delivery) generates a list of people it deems “relevant” as potential terrorist threats. That list goes to the appropriate government agencies, but its list of “irrelevant” people—individuals who aren’t threats to homeland security but who, The Machine predicts, will be involved in some other type of violent crime within a given week—is erased every night. Haunted by that discarded data and, it seems, eager to atone for his pre-9/11 self-absorption, Finch regularly takes advantage of  a “back door” he built into The Machine’s programming and retrieves only the social security numbers of the “irrelevant people” (anything more would alert the government to his hacking activity). Finch doesn’t know whether these people will be perpetrators or victims. He knows only that they will be involved, and that this knowledge represents “a chance to be there in time,” as neither he nor Reese were before. 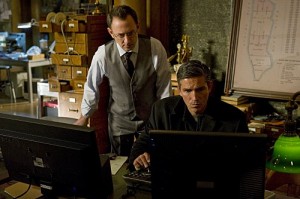 The Machine (ensconced, the episode’s final shot reveals, in a Raiders of the Lost Ark-esque warehouse full of computer drives rather than wooden crates) is the premise’s central science fiction conceit. Any computer that can predict crime with such pinpoint accuracy can only be called a supercomputer. Finch attributes to it the godlike traits of omniscience and omnipresence. The knowledge it gives “is never wrong.” The Machine is not, however, benevolent. Despite its stated purpose of protecting the public, Finch clearly regards his creation as a threat: why else would he have given it an “off switch”? The Machine could easily become the real “bad guy” of the series, as supercomputers have a way of doing in so much science fiction. At one point, The Machine even watches Reese through the lens and steadily burning red light of a traffic camera—surely an homage to HAL 9000.

The show might also be at home in the superhero genre; specifically, Batman as interpreted by the Nolan brothers (The Machine is close cousin to Batman’s cell-phone surveillance system in The Dark Knight). Like Bruce Wayne, Finch is incredibly wealthy and has access to unbelievably advanced technology; however, because of a chronic limp (I bet he’s a gunshot victim; like Batman, Finch hates firearms), Reese must act as Finch’s Batman. Reese doesn’t wear a cowl or cape, just a ski mask, but his superior physical strength is established in the pilot’s first scene as he takes on a bunch of subway thugs. Unlike Finch or Batman, Reese has no aversion to guns—or to killing. Guilt as much as altruism drives these two men to stop bad situations from developing, or to set them right when they do. (What looks like the weekly, episodic nature of those situations, and the expectation that Finch and Reese will prevail while remaining outside the law, also makes me think of David Banner’s weekly interventions for the sake of justice in the old Incredible Hulk series; a melancholytheme for solo piano would seal the deal.)

I think it unlikely that Person of Interest will generate the—well, interest—that Abrams’ and Emerson’s last collaboration did, let alone the Nolan brothers’ Batman movies. Emerson turns in an enjoyably cryptic performance as Finch, but Caviezel’s work as Reese left too much to the viewer to fill in. Even having been told (rather than shown) that Reese is haunted by his past and desperately needs “purpose,” I found his quick decision to work with and for Finch, about whom he really knows nothing, barely credible. The crisis of the week felt like a paint-by-the-numbers crime drama, so many of which already populate the CBS schedule. 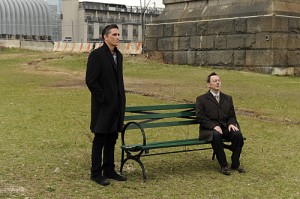 The Machine holds promise as a long-term adversary, though; and Finch and Reese’s activity might offer us chances to reflect on ourselves as moral agents—and, as Christians, God’s agents—in a world full of bad situations both waiting to happen and already in progress. At one point, Reese complains to Finch, “You’re asking me to act without seeing the whole picture.” Finch replies, “I offered you a job… I never said it would be easy.” Isn’t that like our “job,” our vocation, as Christians? We have no Machine that can predict our future; we don’t get the benefit of “the whole picture,” the God’s-eye view, of life. Even so, Christ calls us to do “all the good” we can (Philemon 6). Or, as John Wesley is credited with saying, “Do all the good you can, by all the means you can, in all the ways you can, in all the places you can, at all the times you can, to all the people you can, as long as ever you can”—not meting out vigilante justice, but sharing God’s love and Word, by any means necessary.