Our Days are Numbered

I enjoyed “The Lodger” (5.11). I enjoyed its sequel, “Closing Time,” even more. Thank you to Matt Smith and James Corden for flawless performances, and congratulations to Gareth Roberts for a sparkling script, overflowing with delightful character moments and quotable quotes. (Baby Alfie calling himself “Stormaggedon, Dark Lord of All!” The Doctor name-checking Star Trek!) I spent most of the hour laughing, with a big, geeky grin on my face. And, yes: the last five minutes left me suitably stoked for next Saturday’s big finish.

For what was mostly a fun romp of an adventure, though, “Closing Time” hit some fairly significant and somber themes. When we stop and think about it, for example (and we don’t like to), we’re all in the same situation as the Doctor in this episode. Our time is running out. True, more people live longer than the “seventy years, or perhaps eighty” expected by the psalm-singer (Psalm 90.10); but the clock goes tick-tock for us all. And while, as Christians, we know this earthly life is not the only life, we also believe how we live this life matters. God didn’t put us on Earth to be idle.

We’re all time travelers, Carl Sagan observed: “each of us time travels into the future, one year, every year.” And once our years are behind us, we cannot go back. Not even the Doctor seems able to rewrite his personal past. In “The Fires of Pompeii” (4.2) he spoke of the part he played in his own people’s destruction, telling Donna through tears, “Can’t you understand? If I could go back and save them, then I would, but I can’t! I can never go back.” No one gets do-overs. That hard truth means we have to do well on our first and only time around—as well as we can, at any rate. 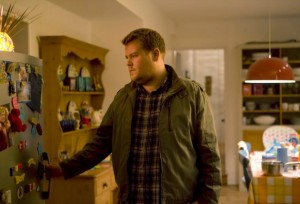 And so the psalm-singer goes on to pray that God will teach us “to count our days rightly, that we may obtain a wise heart” (90.12, NJPS). There are wrong ways to count our days. One wrong way is to spend them mired in trivialities, squandering our time and energy on inconsequential fluff like the front page story the Doctor  mentions, “Nina’s emotional journey” (“which, in fairness, is quite inspiring”). We can pretend we have all the time in the world, perpetually putting off things that really matter, people who really matter. The books we’ll read, the places we’ll visit, the relationships we’ll attend to, the joy we’ll bring to and the good we’ll do for others… someday, the proverbial someday. Or we can cram our days, hours, and minutes so full of things and people that time becomes our enemy because we feel we never have enough. We are often so good at filling our schedules we fail to distinguish between meaningless busy work and valuable business. We fall into the doldrums the “crabby” Doctor initially says await the crying Alfie: “Mortgage repayments, the nine-to-five, a persistent, nagging sense of spiritual emptiness. Save the tears for later, boy-o.” Who hasn’t feared, at some time or other, that “a normal, human life on Earth” really doesn’t amount to more than that?  Who hasn’t, like the Teacher in Ecclesiastes, been “distressed by all that goes on under the sun, because everything is futile and pursuit of wind” (2.17, NJPS)?

Psalm 90 holds out hope that God can teach us a better way, the right way, to count our days. The wise heart sees our days—all of them that dawn, as many as they may be—as new opportunities to love and serve God and neighbor. God’s mercies are new each morning (Lam. 3.23), and so are the ways we may celebrate and share them.

I love the old, King James translation of twelve-year-old Jesus’ question to Mary and Joseph: “Wist ye not that I must be about my Father’s business?” (Luke 2.49). He calls us all to be about his and our Father’s business with him. We might imagine ourselves, every morning, putting on a badge like the Doctor’s, one that bears our name and the slogan, “Here to help.” God has put us here to help each other, and, in so doing, help this world resemble, more and more, the new world God alone can and will one day bring. One of my denomination’s statements of
faith states this Christian conviction: “Life is a gift to be received with gratitude and a task to be pursued with courage” (The Confession of 1967, 9.17). 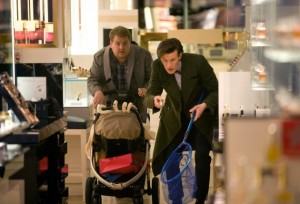 As I mentioned last week, one of the dominant themes of Moffat-era Doctor Who is the importance of seeing clearly. “Closing Time” proves no exception. I wish I’d counted the number of times some form of the verb “to notice” occurs in the script. The action really only begins, of course, once the Doctor actively chooses not to turn a blind eye to the power interruptions in Colchester, but to notice them—as much as he wishes he could do otherwise: “Just go, stop noticing,” he repeats, mantra-like, on his way to the TARDIS. “I am through saving them.” But he’s not, because he’s the Doctor. Noticing people in trouble and saving them is what he does. He might be trying to keep his “farewell tour” at the easy, superficial level of “social calls”—“popping in and popping out again, having a laugh”—but he knows that really living life means noticing others and getting involved with them, especially when they are in need. This lesson was one of the first Amy learned when she started traveling with the Doctor: “You never interfere in the affairs of other peoples or planets—unless there’s children crying?” she asked him in “The Beast Below” (5.2). Observation leads to action; noticing leads to doing.

As Christians, we recognize this dynamic from Scripture. Not for nothing did Hagar name God “El-Roi,” or “God of seeing”: “Have I not gone on seeing after He saw me?” (Gen. 16.13, NJPS). She’s the only human being in the Hebrew Scripture who gives a name to God, and it’s a good one. Centuries later, during another wilderness encounter with a mortal, God declares, “I have observed the misery of my people in Egypt; I have heard their cry on account of their taskmasters. Indeed I know their sufferings, and I have come down to deliver them… The cry
of the Israelites has now come to me; I have also seen how the Egyptians oppress them. So come, I will send you to Pharaoh…” (Ex. 3.7-8, 9-10). Verbs of noticing yield to verbs of doing; God’s seeing and hearing the suffering of God’s people leads to God’s engagement with and saving action for them. We can trace this trajectory into the New Testament, too: “When [Jesus] went ashore, he saw a great crowd; and he had compassion for them and cured their sick” (Matt. 14.14). The God who notices and gets involved does so in a consistent but dramatically deeper way in the life, death, and resurrection of Jesus Christ.

And this God who sees and saves expects his followers to do likewise: “Lord, when was it that we saw you hungry and thirsty or a stranger or naked or sick or in prison…?” (Matt. 25.44). In this week’s episode, the Doctor tells Craig that Nina on page one of the paper isn’t the person who should be noticed, but the people “on pages seven, nineteen and twenty-two,” but “no one’s noticed yet.” The Doctor notices the people on the margins, the people others overlook. As Christians, we can’t do any less. I don’t know about you, but I can be good, too good, at not noticing “the people on the back pages” in my community: the hungry, the poor, the suffering. Doctor Who can remind me of what my faith teaches me: I can’t go through life “not noticing things,” especially not noticing them. 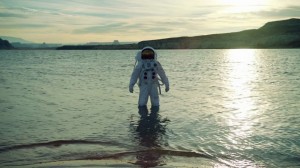 I wish I could offer some Grand Unified Theory of how next week’s episode will wrap up series six in a satisfying way, but I can’t. I can only state my conviction that it will. (Best guesses? I did not arrive at all of the following conclusions completely on my own, but here goes. I think we have actually been dealing with the Ganger Doctor since “Let’s Kill Hitler,” and he is the Doctor that River will kill; “our” Doctor has been off looking for baby Melody Pond all this while, and will find her–I simply will not accept that, even if only in one track of the complicated time-space continuum, that infant is still in jeopardy! And I wonder if the Ganger Doctor is actually the only Doctor whom River has ever dated. If “our” Doctor ends up raising Melody in the TARDIS–and why else would River have been touching the Doctor’s cradle when revealing her identity to him?–that fact may mean her romantic relationship with the Doctor is still entirely appropriate, because the Ganger Doctor would not have been the Doctor who raised her. One last point: back in the spring, my wife–who tends to be much more correct about such things than I am–predicted that the good man, the hero to many, whom River is in Stormcage for killing will be Rory rather than the Doctor. I will buy that, and hazard a guess that the death of Rory–who will this time stay dead, at least until Steven Moffat ends his tenure as show runner–will prompt Amy to return to the TARDIS. But who knows?)

Last year, Doctor Who was the most impressive, intelligent, and entertaining ongoing story I’ve ever seen on TV. Ever. Both my head and heart were engaged from the first scene of “The Eleventh Hour” to the last scene of “The Big Bang.” Series six hasn’t been quite the magical experience series five was—it’s likely no future series can be, I guess—but I have found the second half of this series largely stronger than the first, and, wherever Steven Moffat takes us next week and however we get there, I’m confident I’ll like it.