Martin Luther  had his “table talk”—“notes,” “opinions” and “cursory observations” uttered “in the freedom of private friendship” rather than under the more rigorous scrutiny of the lecture hall or the pulpit. As the remainder of series six of “Doctor Who” airs, let’s have some “TARDIS talk.” If you’re a Doctor Who fan, new and/or old, and have notes, opinions and cursory (or not so cursory) observations to share, join in!

Do note: “TARDIS Talk” will treat everything officially aired through the most recent episode as fair game, so here there be spoilers.

Its title notwithstanding, “Let’s Kill Hitler” is full of the kind of free-wheeling, “anything’s possible” (especially the impossible) fun that made me fall in love with this show last year. Yes, the stakes are serious, but, how can you not be enchanted by the Teselecta, “a time-traveling, shape-shifting robot worked by tiny cross people?” I didn’t see that Terminator 2/Fantastic Voyage mash-up coming either, but Steven Moffat sells it, right down to the cordial but deadly “antibodies” floating around inside: “Welcome. You are unauthorized. Your death will be initiated. Please remain calm while your life is extracted.” If I don’t see that dialogue on a t-shirt by Christmas, I’ll be disappointed. The Teselecta would probably also make a great toy, complete with interchangeable heads, limbs and outfits (I mean, if BBC licensing chose to turn the Ganger-goo Doctor into a playset…)! 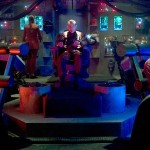 Within the story itself, of course, the Teselecta is anything but child’s play. Those “tiny cross people” take their time travel capability seriously—too seriously, the Doctor suggests. As he says upon hearing about their self-appointed purpose of punishing history’s villains, “I would ask you who you think you are, but the answer seems obvious.” How do we know when we’ve crossed the line between our responsibility to resist evil (e.g., James 4.7) and our obligation to leave the judgment of evil to God (e.g., Romans 12.19)? “Let’s Kill Hitler” is a clever title, all right—Moffat’s riff on the stuff of “what if you could go back in time” conversations in countless college dorms—but those words and the moral imperative they can suggest were serious business for Dietrich Bonhoeffer and the other conspirators who plotted to assassinate Hitler in 1945. Would the Doctor have accused Bonhoeffer and the others of thinking they were God? I don’t think so. The Teselecta operators aren’t actually resisting evildoers, simply punishing them—“giving them hell” in order to make sure the villains’ bad deeds don’t go unanswered. The Doctor may know that it’s one thing (and a good thing, at that) to try and stop evil before it happens; but once evil has taken place, no amount of retribution can set it right. Very often, as history has shown, attempting to get even only makes things worse.

Wisely, the episode spends very little time dealing directly with Hitler. Simply by setting this story in Nazi Germany, however, it raises the question (at least in this fan’s mind) of whether and why the Third Reich is one of those points in time that can’t be “rewritten.” To a small, but real degree, the episode faced the same dilemma as this summer’s Captain America movie: if you put a fictional superhero (the Doctor; Cap) in a World War II story, how do you honor (or at least avoid dishonoring) the real suffering of those on the battlefields and in the concentration camps? The current answer seems to be: have your hero fight someone other than the Nazis. Cap’s mission was taking out Hydra, not Hitler; similarly, the Doctor must stop the Teselecta, not the Führer.

This question of why evil can’t be rewritten confronts us in real life, over and over. It’s the question of theodicy. You’ve probably heard some variant of its famous formulation: if God is all-good and all-powerful, why does evil persist? Is God either unable or unwilling to stop it? If so, what does that fact tell us about God? How many of us have, at one time or another, hurled at God the same question Habakkuk did: “Your eyes are too pure to behold evil, and you cannot look on wrongdoing; why do you look on the treacherous, and are silent when the wicked swallow those more righteous than they?” (1.13). It’s an old question (perhaps “the oldest,” the one “hidden in plain sight,” that the Silence seeks?), and still one without a fully satisfactory answer. 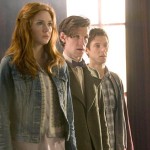 A more pressing question may be how we confront, not historical evil, but the evil within ourselves. Melody/“Mels”/River’s arc in this episode suggests a journey we all must take, if we are ever to be, like her, “amazing.” As “Mels,” River is not herself. She doesn’t even know her “real name” (albeit as translated into the language of the Gamma Forest). As in so much literature, the lack of a true name signifies the lack of true identity (for more, see the Sci-Fi Christian’s current Wizard of Earthsea re-read). The Doctor’s plea for her to “find River Song” is really a summons to repentance. We tend to think of repentance as saying we’re sorry for our sin. It’s not less than that, but it’s also more. The Greek word for repentance, metanoia, suggests a changing of the mind. “Mels” literally has to “change her mind” and escape the Silence’s programming in order to become who she really is—and the same holds true for all of us, “programmed” slaves that we are to sin. We must all be “transformed by the renewing of [our] minds” (Rom. 12.2). That’s real regeneration: not outward, but inward.

Paradoxically, to find ourselves (our real selves, the people whom God created us to be) we must lose ourselves (the people we think we are, the people we strive so hard to make ourselves—“Shut up, Dad, I’m concentrating on a dress size!”). River’s use of her remaining regenerations in order to save the Doctor’s life is more than a clever way of answering the question frequently heard in fan discussions this spring: “If River was the regenerating girl in the alley in Florida in 1969, why couldn’t she regenerate as a grown-up at the end of ‘Forest of the Dead’?” It was a lovely dramatization of this spiritual truth: “those who want to save their life will lose it, and those who lose their life for my sake, and for the sake of the gospel, will save it” (Mark 8.35). It’s a scary prospect to give up one’s life, but Jesus assures us that (infinitely far more than the Doctor) “he’s worth it.”

And Jesus himself has already given his life for ours, emptying himself, pouring himself out “to the point of death—even death on a cross” (Philippians 2.8). I suppose the Doctor’s latest brush with death could spark a discussion of whether and to what extent the Doctor is a Christ-figure—but we still have five weeks in the season to go, and (presumably) some sort of post-Lake Silencio “resurrection from the dead,” so let’s save that for another day. (I will say I can’t remember ever laughing so hard at a character who’s dying! The tuxedo-clad Matt Smith, fighting his own rebel flesh (ah-ha!), kept me chortling. I don’t think he’s reminded us just how accomplished a physical comedian he is since “The Eleventh Hour.”)

How many regenerations did Melody/River experience, in her own timeline, between “Day of the Moon” and “Let’s Kill Hitler”?

And did her penchant for getting into trouble for talking back to her teachers make anyone else think of Susan, the Doctor’s granddaughter, in “An Unearthly Child”? You don’t suppose, do you, that, for the show’s big fiftieth anniversary, Moffat might reveal that Susan and River are one and the same? (Nah. Couldn’t be. Could it?)