On September 8, 1966, NBC debuted “The Man Trap” as the first episode of “Star Trek.” Whether or not you think it’s one of the show’s best efforts (I think it’s underrated), it got enough people’s attention to give birth to three seasons with Kirk and crew, four further live-action and one animated television series, eleven major motion pictures, and a seemingly infinite diversity of infinite merchandise.

I wanted to mark this birthday with a deeply reflective, philosophical and theological piece worthy of The Sci-Fi Christian imprimatur. (And I do have some thoughts on what Captain Kirk can teach Christians about the importance of iconoclasm, for another day.) But birthdays are also a time for lighter fare, right? So for now, let me humbly offer my favorite memory from my “golden age” as a Star Trek fan.

In 1987, George Takei and Walter Koenig visited a shopping mall in Cary, North Carolina. That’s right: an ordinary shopping mall, where they would sign items for fans free of charge. (Those were the days!) I eagerly waited in line, clutching my “Star Trek” wall calendar and wondering what to say to “Sulu” and “Chekov” when my turn came. I didn’t want to sound too geeky, of course—there’d be no accusatory inquiries about breaking supposedly established warp-speed limits in episode so-and-so from me! What could I say that would appropriately convey both my enthusiasm for these gentlemen’s work and my understanding that (anticipating GalaxyQuest) “of course it’s not real?”

Finally, inspiration struck. I didn’t yet know what I’d ask Takei, but I decided I’d ask Koenig about that moment, early in Star Trek III, when Chekov mutters something in Russian. I didn’t speak Russian. I didn’t know anyone who did. And we were still living in the “stone knives and bear skins” days before DVD subtitles, Google translation pages, or Internet fan forums. Here, I thought, I had the perfect chance to learn straight from the source. It was a smart question, a sincere question. I believed it had not one hint of obsessive fannishness about it: “What was

Chekov saying?” (Reliable sources have informed me, in the years since, that my question was nevertheless dorky. Oh, well. I stand by it!)

Koenig worked his way down the line, shaking hands and signing pictures. As he signed the appropriate page in my calendar, I asked my well-considered question.

Maybe I spoke too quickly; I was excited and nervous. Maybe he simply had to stop and think; I was asking about one small scene filmed several years earlier. But whatever the reason, Koenig fixed me with what I regarded as a very cold stare and paused for what I took to be a very irritated beat before answering. (For the record, Chekov says, “I’m not crazy; so there!”) I thanked him as he moved on, but I felt about as tall as little Clint Howard’s Balok. I was incredibly embarrassed. I had just wasted Walter Koenig’s time! I might as well have asked him why Khan had recognized him in Star Trek II, or what his Starfleet serial number was, or which of his on-screen screams did he like better, the one in “The Deadly Years” or the one in “Mirror, Mirror?” Quick, someone please stuff me up a Jeffries tube before I do any more damage!

My apparent misstep with Koenig shook me so much, I didn’t immediately realize I was now standing before George Takei. Great, I thought. Maybe I should just call him “Tiny” and make my humiliation complete. But to my delight, Takei was warm and gracious. He looked me in the eye as he shook my hand and offered to sign not only the calendar I’d brought but also an 8″ x 10″ glossy he was providing. 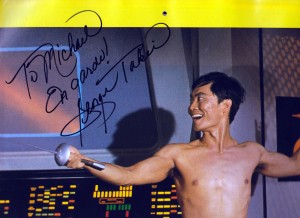 “Of course!” And he laughed that wonderful Takei laugh. “I’m so thankful to you and to all the Star Trek fans for your years of support, it’s absolutely the least I can do!”

Mr. Sulu had thanked me for my support of Star Trek–how cool was that? 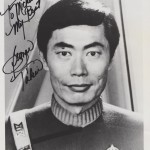 I’m sure George Takei has said those words to innumerable Star Trek fans. I’m sure Walter Koenig has, too; I try not to hold that day against him. (Usually, I succeed.) That incident, though, remains my favorite memory from when I was a young Trekker (and, yes,  I insisted on being called a “Trekker” back then). It also sticks with me as a reminder that even we non-celebrities can never know how the way we treat someone will affect them, so it’s probably best to err on the side of the Golden Rule and make them feel special (because, after all, they are).

Mr. Sulu and Star Trek, you’ve still got my support. Happy birthday—”surely, the best of times.”