Things that Go Bump in the Night

As he began his current tenure as head writer, Steven Moffat told io9 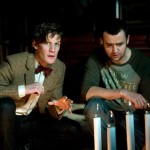 , “‘Doctor Who’ doesn’t take place in outer space or the future, it takes place under your bed.” When the series works best, it does so because we bring to it our own fear of and fascination with the unknown.

By that logic, “Night Terrors” should have been an all-around success. It is set, as the Doctor himself tells us, in “the scariest place in the universe: a child’s bedroom.” Does anyone not have memories of sleepless nights as a kid spent worrying about strange shadows on the ceiling or wondering whether you’ve heard something scary outside your window? I still remember the babysitter who, tucking me in, shared her surprise that I slept with my closet doors open. “Most kids don’t like to do that,” she told me. Did I then ask her to close them? You bet I did.  Surely everyone prayed, at some point in their youth, that old Scottish prayer: “From ghoulies and ghosties and long-leggedy beasties and things that go bump in the night, good Lord, deliver us!”

“Night Terrors” deals with “things that go bump in the night.” It does so, however, so woodenly (pun intended) that viewers have absolutely no desire to watch from behind the sofa! The young boy who plays George is a cute kid, and I felt sympathy for his character’s plight—perpetually panicked, unable to sleep or even to express normal, healthy emotion—but I never felt scared right along with him. Several other people have suggested that younger viewers of the episode would have (and did) feel scared, so my reaction may well be nothing more than a function of age. But I also found the actors’ performances largely listless; even Matt Smith seems bored (compare his work here to his efforts in last year’s contemporary domestic episode, “The Lodger”—to which “Night Terrors” bears more than a few similarities, from something as central as the role of a perception filter to something as small as “air kisses”—and you’ll see). Writer Mark Gatiss had the right pieces in place but failed to evoke any real feeling—until the last few minutes.

But what an important few minutes! Like the last few minutes’ of Gatiss’ Series 5 outing, “Victory of the Daleks,” these minutes beat as this episode’s true heart. They are what this whole, should’ve-been-spooky story is all about.

Have You No Blessing? 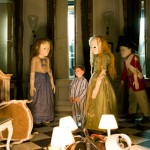 To defeat the fears threatening him and our heroes, George—who looks like a human child but is actually an alien, desperately seeking a family—needs to hear his “father,” Alex, promise that he will not send George away. At first, Alex doesn’t think he can make that promise; after all, this being isn’t human, let alone his biological son. (Alex’s inability to remember George’s birth sounds a neat counterpoint to Ganger Jimmy’s clear memories of his son’s birth in “The Almost People”). In the end, however, motivated by the Doctor (and the threat of imminent death at the hands of life-size wooden dolls), Alex declares, “Whatever you are, whatever you do, you are my son, and I will never, ever send you away.”

It’s a beautiful moment. If everyone remembers scary things in their cupboards, many people also remember, and may still even feel, an intense yearning to hear their parents—and, perhaps, particularly their fathers—speak such words to them. If we were fortunate, our parents—or grandparents, or guardians, or whichever caring adults raised us—did. If we weren’t, we may still be seeking to hear those words, looking for that validation wherever we can find it (including some places we shouldn’t go).

Bible readers know that the power of the blessing, especially the father’s blessing, is not to be underestimated. One of the most haunting scenes in the Old Testament occurs as Esau, realizing too late the extent of his twin brother Jacob’s trickery, openly weeps before their fooled and foolish father Isaac: “Have you but one blessing, Father? Bless me too, Father!” (Genesis 27.38, NJPS). Isaac musters up a prophecy for Esau that, at best, sends mixed signals, but it’s a stretch to call it a blessing; and it’s certainly not the blessing, the bestowal of love and life direct from God in words that have such force they cannot be recalled once uttered. Like the word of God in the beginning, the word of blessing creates what it names. It brings new reality into being.

In Bill Moyers’ book of conversations around the Genesis narratives, author and psychotherapist Naomi Rosenblatt talks about the importance of the parental blessing:

By internalizing the blessing of our parents’ love, we acquire self-esteem, self-confidence, and a deep sense of security. Their blessing tells us we matter, that we are valued… [T]he child is being blessed not because he or she is better than any other kid on the block, but because in relation to the mother or the father, that child is special. In a way, this echoes the theme we get in the first chapter of Genesis, where God blesses us and says, “You are made in my image. I’m endowing you with spiritual identity so that whatever happens to you, you carry that inner knowledge that you’re special to me” (Moyers, Genesis: A Living Conversation, New York: Doubleday, 1996, pp. 265-266)

Alex blesses George with this same kind of “spiritual knowledge.” He makes an unconditional, irrevocable pledge of loyalty and love. He bestows on George a special identity: “My son.” Alex’s newly acquired “self-esteem,” “self-confidence” and “deep sense of security” save the day, because (in another, more elegant parallel to “The Lodger”) Alex makes an explicit profession of love. He makes new the promises parents must make. Might we even, as Christians, say he makes new the covenant? Surely it’s not too great a distance from Alex’s identity-giving pledge to the words spoken by God the Father to Jesus at the river Jordan: “You are my Son, the Beloved; with you I am well pleased” (Mark 1.11). The Father’s blessing is one we are, through Christ, graciously given as well. “Once you were not a people, but now you are God’s people…” (1 Peter 2.9). If the gift of a human father’s blessing to his son makes “salvation” possible, how much more must the gift of the Heavenly Father’s blessing to his only begotten Son?

Train Up a Child…?

My appreciation for Gatiss’ dramatization of the salvific blessing was, unfortunately, diminished a few minutes later. As he takes his leave, the Doctor assures Alex that all with George should now be well because, as an empathic, adaptive alien, George will “be whatever you want him to be” (at least until puberty hits). 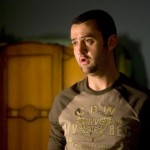 have hopes and dreams for their children. And, as the old (and lovely) Book of Common Prayer language states, God commands that Christian children “be brought up in the fear and nurture of the Lord, and to the praise of his holy Name” (taking a cue from Ephesians 6.4, where parents—“fathers,” in the original Greek—are admonished to avoid provoking their children). The biblical injunction to “train children in the right way” remains clear (Proverbs 22.6).

Training children in the right way, however, doesn’t mean making them become “whatever parents want them to be.” The Doctor admits, earlier in the episode, that he’s “rusty” at parenting; I guess we must take him at his word. Children are ours to raise and influence, but—as the Doctor told Amy regarding Melody last week—they must also go their own ways, and not only before they leave our homes. We must allow them safe space within which they can explore their unique, God-given gifts and abilities. We must afford them time and room to discover their calling from God.

I know, I know. It’s a quick line, tossed off casually in the last few minutes, not meant as a serious treatise on parenting. It rankled all the same.

Did anyone else notice that the Doctor told Amy and Rory, once the adventure was over, it was good to be “all back together again, in the flesh” (emphasis added)? Yes, the immediate context is Amy’s unfortunate transformation into a wooden plaything (why should Rory get all the transmutation fun?). But might his words also be a none-too-subtle clue that we are dealing with a reconstituted “Flesh”/Ganger version of the Time Lord? I don’t know, but I’ll be paying close attention in the weeks to come. Many fans have speculated that the Ganger Doctor, and not “our” Doctor (even though we were told at great length, “He is the Doctor”), is the Doctor destined to die at Lake Silencio. Perhaps that line of dialogue means they’ll be proven right.