If anyone ever again suggests that Karen Gillan is a weak actor who brings little more than a pretty face to Doctor Who, “The Girl Who Waited” definitively proves otherwise. Her performance as “Amy-Then”—the version of Amy Pond who spends a harrowing 36 years fighting to stay alive in the Two-Streams “kindness facility”—is simply astonishing. Working from a rich and powerful script by Tom McRae, Gillan creates an unforgettable, fully realized character. After spending nearly four decades fighting off handbots, hacking Two-Stream’s computer, and building her own sonic “probe” (or is that “screwdriver?”), Amy-Then is a grim, battle-hardened warrior whose resourcefulness, tenacity, and ferocity have allowed her to survive—at a cost. The only emotion Amy-Then allows herself to feel, when we first meet her, is hatred for the Doctor, whose uncertain grasp on “extrawobbly” time caused this temporal tragedy. When she spits out her childhood name for him, “Raggedy Man,” it cuts as sharp and deep as the sword she wields. No other feelings occupy Amy-Then’s heart, not even her love for Rory: the only vestige of that affection is the literally disarmed handbot she calls by his name.

“The Girl Who Waited” emerges primarily, then, as a parable about the importance and the power of love. Consider the scene in which Amy-Then and Amy-Now talk with each other (by means of what is, in the end, a ridiculously oversized version of the “Romper Room” magic mirror—the episode’s not brilliant in every detail). “You’re asking me to defy destiny, causality, the nexus of time itself for a boy,” Amy-Then scoffs. Amy-Now replies, “You’re Amy, and he’s Rory, and oh, yes.” Amy-Now looks upon Amy-Then throughout this scene with remarkable compassion. Gillan could have played her lines as Amy-Now with a sense of desperation at her predicament or bewilderment at the crazy “timey-wimeyness” of it all; instead, she exudes a peaceful, non-judgmental presence. Amy-Now graciously makes room for Amy-Then to reconnect with her (their shared) love for Rory. In that incredibly literal way only science fiction and fantasy allow, Amy loves herself; and, extrapolating from Jesus’ Great Commandment, we can only love others as we love ourselves if we do love ourselves (see Matt. 22.39). “All those boys chasing me,” Amy-Then reflects, “but it was only ever Rory.” Rory, who paid attention to Amy as they grew up in Leadworth to the exclusion of all other girls. Rory, who spent two thousand years as a living, plastic Centurion keeping watch over her in the Pandorica. Rory, who even in this episode quickly accepts Amy-Then as Amy nonetheless: “I don’t care that you got old. I care that we didn’t get old together.” Amy-Now gently guides Amy-Then back to this profound experience of knowing herself to be loved over a lifetime.

Consequently, Amy-Then can act out of that love by relieving Rory of his impossible choice in the episode’s final minutes: whether to unlock the TARDIS door and let her in. Having learned the truth (too late) that “there can only be one Amy in the TARDIS,” Rory can’t bear the thought of leaving Amy-Then behind. The Doctor’s rationalization about divergent time streams and rewritten histories rings true in a “Star Trek” sort of way. For Rory, however, it brings no wonder, no comfort. He loves Amy—Amy-Now and Amy-Then. He appreciates, as the Doctor doesn’t, that they are the same person. He honors the truth of Amy-Then’s existence when the Doctor won’t: “She happened! She’s real!” He swore to protect Amy. How can he turn his back on her hand, pressed against the window of the call box door? (It’s surely no accident that the next camera shot highlights the gleam of Rory’s wedding ring. The “for better or for worse” clause of marriage vows can run up against unexpected complications in science fiction.) 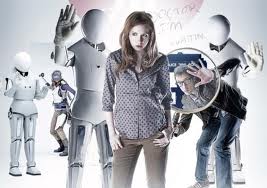 In the end, Rory can do so only because Amy-Then gives him permission, in love. She doesn’t deny that she wants to live; she won’t “bow out graciously.” But she chooses to give “the days with you… the days to come… the days I can’t have” to Amy-Now and to Rory.

“The Girl Who Waited” offers several vivid pictures of the kind of love about which the apostle Paul wrote, the love we encounter most fully in Jesus Christ: “Love is patient, love is kind… It does not insist on its own way… It bears all things, believes all things, hopes all things, endures all things. Love never ends” (1 Cor. 13.4, 5, 7-8).

For all its romance and raw emotional power, Amy-Then’s action marks the second time in three weeks we’ve seen a strong female character sacrificing herself for a man.

In “Let’s Kill Hitler,” Melody Pond poured her remaining regenerations into the dying Doctor. We know that act transforms her into River Song, with an entire “amazing” life still before her. That knowledge doesn’t diminish what she has done, but it does, perhaps, soften its blow.

In Amy-Then’s case, we don’t have a similar consolation. When we see this equally amazing woman for the last time, she has succumbed to the handbots’ anesthesia and is crumpling to the floor, presumably to be finished off by their medicine (which, only at the end, truly “is a kindness”). A friend I watched the episode with pointed out that we don’t witness the final blow; there is, perhaps, a story crack (how appropriate) through which Amy-Then could return. To all appearances, however, she is dead. Amy-Then’s story is over.

The Doctor’s decision to lie about the TARDIS’ ability to sustain a two-Amy paradox means the Doctor used Amy-Then in order to save Amy-Now—“our Amy,” the Doctor tellingly calls her at one point. In “The Big Bang,” the Doctor wept at little Amelia’s bedside over “the times we had… Would have had. Never had… The days that never came.” He grieved at the existence he was sacrificing in order to reboot the universe. But where are his tears for the days Amy-Then sacrifices?

This past spring, many fans protested when the Doctor, who spent most of episodes 5 and 6 eloquently arguing that the Gangers had as much right to exist as their originals—that they were, in fact, the same people—abruptly dissolved Flesh Amy with a flick of his sonic screwdriver. In that instance, however, we had the clearly established plot point that the Gangers were early versions of the Flesh technology. As a later version, Flesh Amy, unlike the Gangers, truly was just an avatar, with no more independent thoughts or feelings than the photograph on a Facebook profile.

It’s harder to defend the Doctor’s actions here. If the Gangers had every right to exist, why didn’t Amy-Then? Perhaps she “should” never have come into being—but, through the Doctor’s own negligence, for which Rory rightly takes him to task, she did. The Doctor relegates Amy-Then to a tool he uses in order to undo his own mistake. No amount of “I’m sorry” as the TARDIS door closes changes that fact. 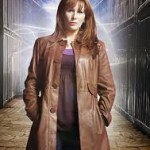 Storytellers make choices. For whatever reason, several of the choices made in modern “Doctor Who” seem to be made against strong female characters. Think of Harriet Jones, who dared question the Doctor’s moral code; or “Doctor Donna,” whose memories the Doctor wiped as (in Two-Streams speak) “a kindness.” Strictly within the world of the story, it was; but how often inreal life are injustices perpetrated as kindnesses?

Strong women don’t always suffer ignominious send-offs in modern Who, of course. Martha Jones enjoys a long and exciting career with UNIT after her time in the TARDIS. Jenny, the Doctor’s “daughter,” is another strong female character whom the storytellers allowed to survive. So why couldn’t Amy-Then have been set free to seek her own adventures, as she told Rory she wanted to? The TARDIS may not be big enough for both Amys, but surely all of time and space is.

It’s possible that my concerns over Amy-Then’s fate say more about me than the series. As I’ve stated, I found her a fascinating character, one I would have welcomed as a companion for many more adventures. (Perhaps a spin-off? If K-9 can get his own show, for goodness’ sake…!) But she’s gone. I do hope we haven’t heard the last of her, even if she never actually returns. Amy-Now seems to remember her, at least for now. And to paraphrase Dr. McCoy’s last line from Star Trek II (said he, jumping franchise tracks), she’s really not dead, as long as we remember her.

Christians have a far more sure and certain hope than an “immortality” that is limited to others’ memories of us. But we also don’t have less than that. Until God’s kingdom comes, until death, “the last enemy,” is fully defeated (1 Cor. 15.26), when we are faced with the untimely and unfair death of people we care for, we can and must remember them and give thanks to God for them.

We do more, however, than remember them. When our lost loved ones are our fellow brothers and sisters in Christ, we remain joined to them through the Holy Spirit. We are bound together in the communion of the saints, and we find consolation and hope in the truth that our God is “God not of the dead, but of the living; for to him all of them are alive” (Luke 20.38).