No disrespect to “Marvel Zombies” out there, but I’m pretty excited about several pieces of animation news from your Distinguished Competition.

First of all, the new animated Green Lantern series is just around the corner!

This summer’s live-action flick was underwhelming, to say the least. But with a slick, futuristic CGI look, an emphasis on fast-paced action and character-based humor, and the guiding hand of Bruce Timm, I think this series, which debuts at the New York Comic Con on October 15, shows a lot of promise. 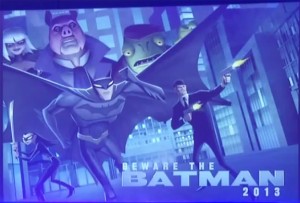 DC has also announced that a new, animated Batman series is in the works, to replace the recently concluded Batman: The Brave and the Bold. With a title like Beware the Batman, though, and a roster of rogues that includes the disgusting and disturbing Professor Pyg from Grant Morrison’s Batman and Robin run–not to mention an Alfred Pennyworth who packs heat (is this a Bat-first?)–this offering, scheduled for 2013, doesn’t sound as though it will have the all-ages appeal of its predecessor. I doubt we’ll have any musical episodes starring Neil Patrick Harris this time around!

Finally, while no new animated Superman series is on the horizon, the Superman Family will not be entirely absent from the Cartoon Network scene. The creative team behind My Little Pony: Friendship is Magic are developing a series of animated shorts starring the Maid of Might as well as Wonder Girl and Batgirl, entitled Super Best Friends Forever. Now, I’ve never seen the current iteration of My Little Pony. Based on my childhood impressions of the property–all cotton-candy, hearts-and-flowers, sicky-sweet “niceness”–I would never tune in; and I would fear for its creators getting their hooves–excuse me, hands–on such iconic DC superheroines. But I am optimistic because, as it turns out, this version of My Little Pony was cool enough to parody “Hide and Q”–an underrated but, I think, outstanding first season effort from Star Trek: The Next Generation–in a recent episode, complete with guest voice John de Lancie himself! So these pony wranglers seem to have some definite geek cred. 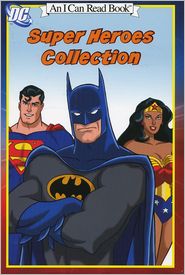 "I'm the grumpity-grump Batman. Even on kids' books."

If nothing else, the Super BFFs may be something I can enjoy with my 4-year-old daughter. Just don’t dare suggest she needs any “girly girl” superheroes. Currently, one of her favorite books is a hardback anthology of I Can Read stories starring Batman, Superman, and Wonder Woman. She can recite large portions of the text from memory. (Yes, I am so proud!)

Now if we could just get McDonald’s to stop classifying all of their superhero-related Happy Meal prizes as “toys for boys,” we’d be making some real progress.

What about you? What news from the world of animation (DC or otherwise) has you feeling like a kid on Saturday morning, all over again?