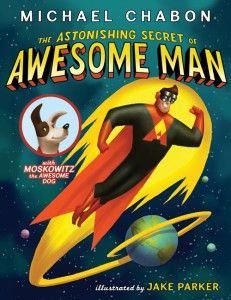 Bestselling novelist Michael Chabon knows some things about superheroes. If you haven’t yet read  his Pulitzer-winning The Adventures of Kavalier and Clay (2000), I strongly recommend you do. It’s a beautiful novel (at times, heart-breakingly so), weaving together the particulars of the European Jewish immmigrant experience at the turn of the 20th century with universal human longings for love, transcendence, second chances, and new beginnings–all set against the backdrop of the birth of the American comics industry. “The Escapist,” the superhero created by the novel’s title characters, has even leapt off the pages of the book to become, in a miraculous feat of metatextuality, the star of real-world comic books published by Dark Horse.

The superhero at the center of Chabon’s latest book–a picture book, gloriously illustrated by Jake Parker (creator of the comic book Missile Mouse)–is Awesome Man, an over-the-top Superman analogue (who can “fly as high as a satellite and as straight as an arrow or through the time barrier and not get dizzy, or feel nauseous, or smash into things… except on purpose”). He is the red cape-clad, square-jawed, pompadoured representation of every kid’s desire to grow up in a hurry. But what excites Awesome Man more than his powers–more even than his dazzling ability to shoot positronic rays from his eyeballs–is his secret identity. At several points, Awesome Man tries to share this secret with the book’s readers, only to be interrupted by such occupational hazards as giant robots, mad scientists, and alien monsters (beware the “mutant talking Jell-O from Beyond the Stars”). On one page, we are led to believe he may be, in civilian life, the Clark Kent lookalike standing in front of the local comic shop. Only at the end is our hero’s “astonishing secret” revealed, and the true nature of what makes him “awesome” disclosed.

Chabon’s text is a lot of fun and, as you’ve seen, irresistibly quotable, especially if you’re familar with the tropes of Silver Age superheroes. At times, it seems too pleased with its own cleverness–I personally love the factoid that Awesome Man requires exactly “seven billion kilojoules per nanosecond” to sustain himself, but I can’t deny the sentence reads aloud clumsily–but on the whole Chabon keeps it simple and endearing, with a modern edge. Parker’s art is colorful and warm, and also holds delights for long-time comic readers; several backgrounds, for instance, reflect the pixellation you saw as a kid when you got your nose right up against the newsprint page (don’t deny it, you know you did). 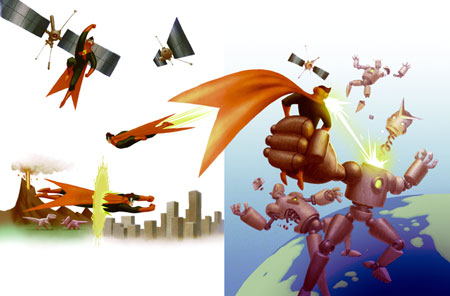 But the book’s themes really make this book a special treat for kids and grown-ups to share. Don’t misunderstand: this is not Kavalier and Clay. That’s only right, however. As I read it, the book has two simple (but not simplistic) themes, and it treats them each with style. Kids will connect with Awesome Man’s halting and sometimes unsuccessful attempts to control all that energy bursting inside him. It’s what makes him awesome, but it’s also a burden: “I’m superstrong. I have to be careful. I can’t start hitting stuff or kicking stuff or throwing stuff around, even though that’s what I want to do so badly. I might hurt somebody, or destroy a city or something.” Awesome Man’s kryptonite is his temper. (The occasional lack of energy-providing positrons doesn’t help, either.) Learning to master our impulses and our often unruly emotions can feel like a feat requiring superhuman strength. I think kids will enjoy reading about a superhero who still finds it a challenge. For their part, adults will connect with the revelation of Awesome Man’s most important ally, and will appreciate the book’s affirmation of unconditional love as the not-so-secret weapon they can give the young, still-developing heroes for whom they care.

The publishers recommend The Astonishing Secret of Awesome Man for ages 4-8. That recommendation seems safe to me, depending upon your comfort with a few instances of mildly disrespectful language (but only directed at villains–“kick a little bad-guy behind,” for example). I encourage you to check it out the next time you have occasion to share a story with your kids, grandkids, or other geeks-in-training. I hope this story of a superhero who finds his secret identity as exciting as his larger-than-life exploits will inspire them to more fully appreciate their own real-life awesomeness. (It may even inspire you to do likewise!)