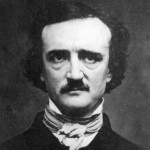 Few authors matter as much to the history of genre fiction as Edgar Allan Poe. Whether you enjoy detective stories (such “tales of ratiocination” as “The Murders in the Rue Morgue” and “The Mystery of Marie Roget”), horror (“The Masque of the Red Death,” “The Fall of the House of Usher,” and many more of his most famous writings), or science fiction (his lesser known but still significant pieces such as the post-apocalyptic “Conversation of Eiros and Charmion” and the proto-cyborg at the center of “The Man that was Used Up”), you owe him some thanks!

George Bernard Shaw once said, “Poe constantly and inevitably produced magic where his greatest contemporaries produced only beauty… We others simply take off our hats and let Mr. Poe go first.”

Now, this literary master of the melancholic, mysterious, and macabre is entering yet another arena: criminal investigation. In The Raven, forthcoming next March from director James McTeigue (V for Vendetta), a fictionalized version of the author (played by John Cusack) must stop a killer who is patterning his brutal crimes after the plots of Poe’s own tales.

The film’s first official trailer finally hit the Internet (UPDATE: on October 7, the 162nd anniversary of Poe’s death, it turns out!). In my judgment, it doesn’t disappoint. (Do note: the MPAA  approved this trailer for “appropriate audiences;” it includes some bloody and potentially upsetting images.)

As some critics are already complaining, yes, the movie seems somewhat derivative of the Robert Downey Sherlock Holmes franchise. But it also looks like a thriller tailor-made for lit nerds like me. I was particularly pleased to see a visual shout-out to my favorite Poe tale, “The Cask of Amontillado.” I’ve never forgotten the forceful shock that story delivered when I first read it–“Whoa, Montresor did what? No way!” (Also, I was the only kid in my 11th-grade English class who thought Poe intended for readers to empathize with Montresor–after all, who among us hasn’t had some annoying Fortunato we’d like to shut up behind a brick wall? Doesn’t mean we’re actually going to do it! It’s called catharsis! Oh, well.)

I’m looking forward to what promises to be an atmospheric, intelligent mash-up of some of Poe’s greatest hits. What quoth you?

P.S. (Poe-stscript): This cartoon from “Bizarro” artist Dan Piraro isn’t new, but was new to me: