I first realized some Christians have a problem with Halloween when I wanted to go trick-or-treating dressed as the Devil.

I don’t remember exactly what year that was. It had to have been later than 1978. That year, in first grade, I proudly patrolled the neighborhood as a Star Wars stormtrooper, with a store-bought plastic mask but without the stupid plastic costume that came with it. Did the stormtroopers in the movie have the words “STAR WARS” printed on their chest? I think not! Thankfully, my way cool mom made me far superior stormtrooper armor out of white cloth and black tape. Looking at it now, I still think it’s awesome.

And my Devil year had to have been before 1983. By sixth grade, my friends had decided trick-or-treating was “uncool,” but I wasn’t quite ready to give up all those free peanut butter cups and pixie sticks. Besides, there was this really spectacular Frankenstein’s monster getup I wanted. Unfortunately, my still way cool but also way sensible mom decided that if I wanted to do it myself, that was one thing, but she wasn’t going to spend hours painting my face green and adhering bolts to my neck. This was a setback, since I knew I didn’t have talent or the patience to make myself up—but, hey, I’d improvise! The bottoms of paper bags are flat, right, just like the monster’s head? I’d just paint the thing green, glue some black yarn on top for hair, cut out some eyeholes, and be good to go! What I didn’t expect was how quickly my glasses would fog up under that paper bag, or how impossible wearing them over the bag would prove. I think I hit maybe four houses, tops, before deciding to go home and watch TV instead.

So it must have been about 1980 when I chose to masquerade as Mephistopheles. And I remember exactly why I wanted to: because I’d get to carry a plastic pitchfork. Add inflatable horns, my red winter pajamas, and cowboy boots (we lived in Texas; what can I say?), and I was set!

But, I did wrestle with a vague sense of guilt as I brandished that pitchfork and collected my goodies. At recess a week or so before the big night, my classmates and I had been comparing costume notes. When I announced my choice, one of my friends asked, his eyes wide and his mouth open in astonishment, “Do you think you should do that? Isn’t your dad a minister?!”

Well… yeah. What did that have to do with it?

Well… yeah. I simply didn’t see the scandal my friend did. He just shook his head and said, in that sing-song voice every elementary school student has mastered, “You’re gonna get in trouble…” He did not mean with my father; he meant with Our Father Who Art In Heaven. 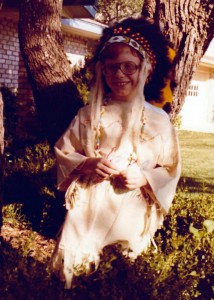 I have to confess, his warning rattled me. Not enough to make me choose another costume, but enough to make me feel slightly relieved when I got home and took the costume off (and not just because my red winter pajamas were really too tight). For the next few weeks, I ate my chocolate and candy corn with a slightly guilty conscience, as though they were somehow ill-gotten gain.

Maybe that’s why, on a Halloween shortly thereafter, I went trick-or-treating as an Indian chief. It was not a politically correct costume by today’s standards, perhaps, but it was also not one likely to provoke the wrath of God.

Not So Fast, “Super Pastor!”

As the years passed, though, I never gave possible Christian objections to Halloween much thought. I cringed when I heard about the “hell houses” some churches run to try and scare kids into salvation; and I dismissed as silly any worries that the holiday was some satanic scheme to ensnare innocent souls.

So, as a young pastor fresh out of seminary, I was caught off guard when a member of the congregation objected to a children’s sermon I delivered when Halloween fell on a Sunday. To make a point about the “costumes” we sometimes wear in life—the ways we try to make ourselves look better in our own and others’ eyes—I asked which kids were going trick-or-treating, and what they’d be dressing up as. Then, I dramatically ripped open my pulpit gown to reveal a Superman shirt.

“Does wearing this shirt mean I really have super powers?” I asked.

“No!” the kids shouted (although a couple of the youngest looked like they hoped I was about to do something impressive like bench press the communion table).

“Does it fool you into thinking I really have super powers?”

“Does it fool God into thinking I really have super powers?”

“No, of course not!” I agreed. “God sees the real us, and loves the real us, even though we aren’t perfect, and don’t always do the right thing, and definitely don’t have super powers.”

I thought it was a pretty good children’s sermon. But this parishioner did not. She never heard my point. She seemed not angry but genuinely troubled as she later asked me why I’d done what I did. She told me that she thought acknowledging Halloween in any way was opening a door to dark and demonic powers. “I know you love the Lord,” she said, “and I know you’d never do anything to show him disrespect or to hurt our church. So I just can’t understand why you would talk about Halloween in worship with the children.”

I didn’t have a ready answer for this kind, concerned woman. But I did have a flashback to that friend from elementary school: “Aren’t you a Christian?!” And I thought, uncomfortably, about the apostle Paul’s warning to early Christians in Corinth who took their spiritual freedom too far: “when you thus sin against members of your family, and wound their conscience when it is weak, you sin against Christ” (1 Cor. 8.12). At the time, all I could do was apologize for having given offense.

But I was left wondering: what, if anything, does the Gospel have to do with Halloween?

And is there any theological justification for celebrating it?

I’ll offer some answers to those questions in Part 2. Until then–what do you think?

14 comments on “Toward a Theology for Trick-or-Treating: One Christian’s Perspective (Part 1 of 2)”