Have any of you ever wondered how Halloween became such a popular holiday? Who came up with the idea of people dressing up in costumes for one night, knocking on a stranger’s door, and asking for candy? Remember when you were younger and your parents told you not to take candy from strangers? I wonder why they never concluded that statement with, “except on Halloween…yeah, it is completely fine to take candy from strangers on Halloween”? Seems strange to me.

Aside from dressing up and the free candy aspect of Halloween, there are a myriad of things to enjoy during the Halloween season. Treats, if you will, that will quench your Halloween thirst, and leave you terrified—well, maybe not terrified; more along the lines of a bringing bright smile across your face. Yeah, that sounds more like it. I have the privilege of starting off The Sci-fi Christian’s Halloween themed week. So, sit back, relax, and allow a stranger to offer you some Halloween treats. Mmwaahahahahaha! Sorry. I had to.

Buffy the Vampire Slayer is my favorite show of all time. Over the course of seven seasons, Buffy had 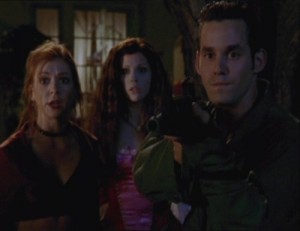 numerous holiday themed episodes. One, in particular, from season two is aptly titled, “Halloween.” The concept behind this episode is that a mysterious man from Giles’ past opens up a costume shop in Sunnydale and puts a spell on all of the costumes in his store; this ensures that the individual wearing the outfit will, for all intents and purposes, become the essence of the costume. Can you imagine the chaos that ultimately ensues? Try to picture little kids, dressed up as demons, actually becoming demons—creepy! There are three things that I really enjoy about this episode, and without giving too much away, I will briefly describe each aspect.

I would highly recommend this great episode of Buffy the Vampire Slayer. If you have Netflix, you can watch the episode on streaming!

Masked is a short story compilation edited by Lou Anders and published by Gallery Books. The theme of the book is superheroes; although broad, it leaves quite a bit of room for the authors to work with. Considering that the superhero is a commonly sought after costume for Halloween, I figured that this would be an appropriate book to talk about. I can say that I thoroughly enjoyed eleven of the thirteen shorts in this anthology. Here are synopses of two of my favorites:

This book is highly entertaining. While reading it, you may find yourself wanting to wear a cape and a spandex suit…Halloween only happens once a year, right?

I think there should be theme songs for every event. For instance, as a graduating class is being congratulated by the officiator of the ceremony, turning their tassels from right to left, I think that it would be a sight to behold if the entirety of graduates were to begin chanting “School’s out for summer!” Appropriately enough, I think that Halloween should have a theme song as well; and what better song than Michael Jackson’s iconic “Thriller”? Here are three reasons why this song screams Halloween:

And there you have it, folks. I hope you enjoyed my treats. Stay tuned tomorrow, as Joshua reveals what’s in his Jack-O-Lantern.