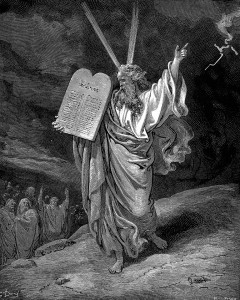 The book of Numbers tells us that Moses “was very humble, more so than anyone else on the face of the earth” (Numbers 12.3). He’d no doubt be surprised, then, at the buzz around yesterday’s report from Twitch that Warner Brothers has entered into formal talks with none other than Steven Spielberg regarding the director’s chair for their upcoming, epic biblical biopic, Gods and Kings.

As Twitch breaks it down, you realize Spielberg is the obvious choice:

Scripted by Michael Green and Stuart Hazeldine, the film aims to tell the entire story of Moses’ life, all the way from birth to death, which covers a great number of episodes–the freeing of the Hebrew slaves, the plagues in Egypt, receiving the ten commandments–each of which could easily fill their own film.

I wonder if Green and Hazeldine will also tackle the less immediately instructive episodes in Moses’ career: his murder of the Egyptian taskmaster (Ex. 2.11-14), for instance, or his wrathful retribution against those Israelites who worshiped the Golden Calf (Ex. 32.19-20, 25-29). Moses was a complicated fellow. Of course, he served a complicated God. As Frederick Buechner observes of Moses, at the end of Moses’ days:

Like Abraham before him and Noah before that, not to mention like a lot of others since, the figure of Moses breathing his last up there in the hills with his sore feet and aching back serves as a good example of the fact that when God puts the finger on people, their troubles have just begun (Peculiar Treasures: A Biblical Who’s Who, New York: HarperCollins, 1979, p. 126). 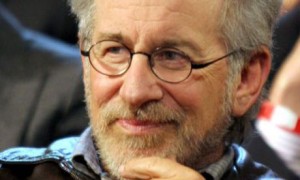 We sci-fi and fantasy fans know that Spielberg has dealt with Moses a few times before, albeit indirectly. The 1998 animated feature The Prince of Egypt was conceived in Spielberg’s living room, as he, Jeffrey Katzenberg, and David Geffen were forming their new film studio, DreamWorks. Katzenberg told Spielberg, “You ought to do the Ten Commandments.” And even earlier, of course, Spielberg wowed the movie-going world with Raiders of the Lost Ark (1981), the ark in question being not Noah’s boat but the box that housed the tablets of the Law (a point about which, I’ve found, some Sunday school students are still occasionally unclear).

Given the production status and locked release dates of Spielberg’s other current projects, Gods and Kings, should he helm it, may not see theaters until early 2013. I, for one, would be willing to wait. No one steers special effects-heavy blockbusters like Spielberg. He still musters the forces of greenscreen and CGI technology in the service of story and character, a gift that would help gain Moses’ story a hearing with a wide, 21st-century audience. I don’t know Spielberg’s religious commitments, but I know from his body of work that he reveres the sense of wonder–and while Moses’ story is by no means about just that, it is also not about less than that.

I was reminded of that fact recently as my four-year-old daughter and I read about the call of Moses from the Children of God Storybook Bible (a beautiful volume, by the way, with text by Archbishop Desmond Tutu and lush, multicultural art from distinguished artists worldwide–highly recommended). As we read about the burning bush Moses saw–“the bush was on fire, but the leaves were still green”–my daughter breathed, clearly in awe, “That’s really cool!”

Yeah. It is. And if there’s any director I’d trust to bring that “really cool,” really wonder-full moment of God’s arresting and amazing grace to the screen, it would be Steven Spielberg.

What do you think? Would Spielberg’s involvement with Gods and Kings make it a must-see on your list?