Are you ready for Doctor Who times two? According to Variety, the BBC is working with multiple Harry Potter-helmer David Yates to turn “its iconic sci-fi TV series… into a big screen franchise.” 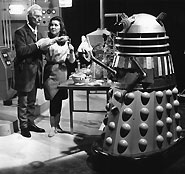 This should be great news for Who fans, right? After all, Doctor Who hasn’t graced the silver screen since Peter Cushing (we should have recognized his foul stench when… oh, sorry, wrong franchise) played the role in two 1960s films: Doctor Who and the Daleks (1965; based on the second television serial, “The Daleks“) and its sequel, Daleks: Invasion Earth 2150 A.D. (1965).

Of course, Cushing didn’t exactly play the character we now know–his Doctor was a completely human inventor whose last name actually was “Who”–so fans frequently argue that our Doctor, the real Doctor, the regenerating Time Lord from Gallifrey, still has yet to materialize at the local multiplex.

So, what better time to bring the TARDIS to the box office than now, as 2013, the franchise’s golden anniversary year, draws near?

Not so fast. Yates apparently isn’t interested in the nearly half-century of Who history. Quoth Variety:

Yates made clear that his movie adaptation would not follow on from the current TV series, but would take a completely fresh approach to the material. “Russell T. Davies and then Steven Moffat have done their own transformations, which were fantastic, but we have to put that aside and start from scratch,” he said. 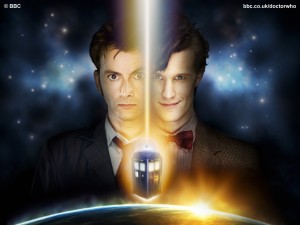 Really? We do? When Davies’ 2005 resuscitation of the series managed to capture a legion of new fans for the show’s concept and central character? When Moffat’s Doctor, Matt Smith, rivals his immediate predecessor, David Tennant, as one of the most popular and recognizable actors ever to play the part? When Doctor Who is finally gaining a wide following here in the colonies, garnering stellar ratings for BBC America and generating much (and much-needed) money for the BBC coffers?

Now we “have to start from scratch”?

To be clear, no one has suggested (yet) that Yates’ franchise would replace the ongoing television series. Moffat, Smith, and others connected with the production have hinted, on numerous occasions, that big plans are falling into place for the impending anniversary. If nothing else, the recent finale of series six has all but promised viewers that we will witness the Eleventh Doctor’s final adventure “on the fields of Trenzalore.” But could it be that once that adventure occurs–once “the first question, the question that must never be answered” is asked–we will witness somethng like Nero’s incursion into Federation space in J.J. Abrams’ Star Trek,  and our Doctor, “Doctor Prime,” will effectively be wiped from existence as we “start from scratch” with Yates’ movie?

Perhaps the BBC still thinks, despite ever-increasing evidence to the contrary, that America won”t embrace this indisputably British show. Variety also reports Yates is “looking for writers on both sides of the Atlantic. ‘We want a British sensibility, but having said that, Steve Kloves wrote the Potter films and captured that British sensibility perfectly, so we are looking at American writers too.'” Maybe it’s just that simple. Or maybe Yates wants American writers to inject more American sensibilities into the Doctor’s character and universe. Maybe even last series’ well-received trek to Utah hasn’t fully soothed the sting of the 1996 TV movie’s “failure” for BBC executives. 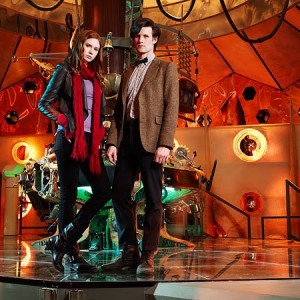 I haven’t actually convinced myself that any conspiracy against the current series is afoot (though one never knows…) But I do find Yates’ stated intention, not to mention the BBC’s blessing of it, confusing. Moffat has, in effect, just given the franchise an opportunity to “start from scratch.” In “The Wedding of River Song,” Moffat cleaned the slate for the Doctor and his fans about as fully as possible. “I got too big,” the Doctor said, in a marvelously “meta” moment. “Too noisy. Time to step back into the shadows.” Moffat has stated that when the Doctor returns, we can expect many more standalone stories, adventures patterned on the classic series’ template, which Variety not unfairly sums up as “the adventures across space and time of a super-intelligent alien in human form, who battles a variety of cosmic bad guys aided by plucky human companions.” To my mind, that’s a premise hard to improve upon or make “fresher.” It’s inherently “fresh.”

But we humans are forever attracted to the new, the “fresh,” the “cool,” the “relevant.” Remember the folks at Mars Hill in the book of Acts? “Now all the Athenians and the foreigners living there would spend their time in nothing but telling or hearing something new” (Acts 17.21).

That’s likely the only reason behind this “new ‘new Who.'” It’s what motivates every relaunch and remake, from Abrams’ Trek to the Andrew Garfield Spider-Man reboot to the (absolutely boneheaded) project of a Joss Whedon-less Buffy the Vampire Slayer to “the new 52” at DC Comics. It’s what makes one of my friend’s film studies students groan whenever she assigns them a movie made before 1970, or filmed in black-and-white. It’s what author Robin Phillips recently called “the human bias for newness.” She approvingly quotes C.S. Lewis:

How has it come about that we use the highly emotive word “stagnation,” with all its malodorous and malarial overtones, for what other ages would have called “permanence”?…Why does “latest” in advertisements mean “best?'”

I realize I sound like every fan of any franchise that’s ever faced an update. And, yes, I’m overreacting: maybe two “streams” of Doctor Who–one on the small screen, another on the large–will work out just fine. But the enterprise still strikes me as misguided. Maybe Yates should make an Inspector Spacetime movie instead. Doctor Who can’t help but be “completely fresh.” After all, it has regeneration at its heart(s).

What do you think? Are you game for Yates to work his movie magic on Doctor Who? Or is one more Who, for you, one Who too many?

7 comments on “David Yates Hears a “Who” (Movie News)”