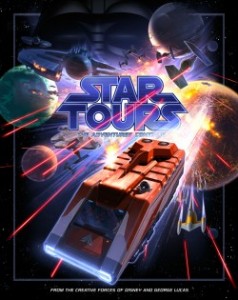 As an adult I was able recapture this feeling in my first visit to the then named Disney-MGM Studios at the Walt Disney World Resort.  I strolled up to a Star Wars themed ride in “Star Tours.”  The ride was decorated with an AT-AT on the outside, which shot water out of its cannons.  Across the walkway from the ride was a Star Wars Episode VI: Return of the Jedi themed speeder bike.  Though a grown man, I jumped on the bike and had my wife take a lot of pictures of me sitting astride it from several angles.  I had to get off, as the line of other grown men was getting long.  The smile on my face was impossible to remove.  And finally, I rode this motion simulator ride, in which I finally got to live the dream and destroy the Death Star for myself.

Things have changed since that first visit.  The Orlando theme park is now Disney’s Hollywood Studios.  In the summer of 2011, “Star Tours” evolved into the next generation as “Star Tours 2: The Adventure Continues” in Orlando and at the Disneyland Resort in Anaheim.  In the old version of the ride, there was only one adventure: destroying the Death Star.  The updated ride features random variables including openings, visits from Star Wars characters and six separate worlds to explore including the Death Star, Tatooine and Hoth.  And yet again, I find myself like a child as Princess Leia tells me that I am her only hope.

Like a child.  Jesus had something to say about that attitude.

Once he was asked who would be the greatest in the kingdom of heaven.  He called a child to him and said:

To come fully into the kingdom, Jesus told us to take on the attitude of a child.  So what has “Star Tours 2” taught me about being a child based purely on how I felt?  A child is enthusiastic; I fully wanted to ride “Star Tours” and be part of the experience.  A child can’t stop talking about the ride; I cannot tell you how many people I have told about “Star Tours 2.”  If only I could say the same for Jesus! A child suspends the critical attitude once they have surrendered to the experience – yes, I was in Anaheim but I let my mind enter the Star Wars universe.  A child is fully present; I did not think about work, or what I was going to eat or what I was going to ride next.  A child is open to enjoyment; I’m a grown man, but I behaved childish as I entered my Starspeeder 1000.

I urge you to become like a child in attitude, even if you don’t have a multi-million dollar Disney attraction to put you in that place.  With that attitude in worship, you can better open yourself to the life Jesus has called you to.