Time and technology wait for no man, not even Ray Bradbury.

The best-selling, award-winning, and much beloved author has finally seen his most famous work dragged against his will into the new era of digital publishing. Simon & Schuster has published Bradbury’s masterful dystopian fiction, Fahrenheit 451 (1953), as an e-book.

Although it is popularly known as a novel set in a bleak near-future society (growing nearer by the day) where people “aren’t allowed to read,” Fahrenheit 451 actually posits a more nuanced set of circumstances. It’s true that protagonist Guy Montag and his fellow firemen have been tasked with a mission to burn books, but they are not stormtroopers enforcing the dictatorial will of a totalitarian state. Far from it.

Think Nothing of It

Fire Captain Beatty explains to Montag that the society’s firemen enforce the will of a public that has surrendered all desire to engage in “time-wasting thought”–a populace that has sacrificed critical thinking on the altars of the instantly utilitarian, the immediately gratifying, and the basely entertaining. Because books–substantial reading material, mind you, not the “comic books” and “the three-dimensional sex magazines”–made demands on one’s mind; because they required mental and emotional engagement with their authors; because they dared distract readers from the all-important American ideal of the “pursuit of happiness”–for all these reasons, books found themselves endangered and, at the last, extinct. Who can stay happy when you have time to think, particularly about books whose authors don’t even agree with each other?

“There you have it, Montag. It didn’t come from the Government down. There was no dictum, no declaration, no censorship, to start with, no! Technology, mass exploitation, and minority pressure carried the trick, thank God. Today, thanks to them, you can stay happy all the time… People want to be happy, isn’t that right? Haven’t you heard it all your life? I want to be happy, people say. Well, aren’t they? Don’t we keep them moving, don’t we give them fun? That’s all we live for, isn’t it? For pleasure, for titillation?”

(from Part One, “The Hearth and the Salamander”)

I could quote paragraph after paragraph, page after page, marveling at Bradbury’s command not only of lyrical language but of incisive cultural analysis. This book is a jewel.

“More than One Way to Burn a Book”

My impression, however, formed while writing a study guide for the book, is that Fahrenheit 451 is pleasantly tolerated by most literary critics (I call Harold Bloom to the stand). As I see it, academics have only begrudgingly allowed it a place on the required reading lists, patting it on its head and winking at students as they say, “Read this, but don’t take it too seriously; it’s unpleasantly polemical and, after all, it’s just science fiction.” (Bradbury, of course, has never classfied himself as a science fiction writer–his SFWA Grandmaster award notwithstanding!)

I still shake my head and wonder, “Why?” If the literary academy should wholeheartedly champion any book, it should be this one; a book that challenges its readers to not just read it but to think about it–to identify and tease out the meanings of its wordplay and literary allusions and evocative imagery. Fahrenheit 451 is not a book educators who care about the life of the mind should be assigning with a snigger or an apology! As Bradbury himself wrote in a later edition’s afterword, “There is more than one way to burn a book.”

(If you are an educator who can correct what I hope are my mistaken impressions about this book’s fate in the classroom, please do so!) 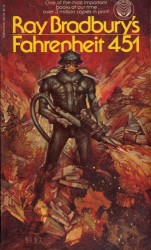 Does a digital edition of Fahrenheit 451 sound an ironic death knell for books? Does it help hasten the day Bradbury sought to warn us against?

I don’t think so. Precisely because his novel is more about the necessity and power of thought than it is about censorship, Bradbury has nothing to fear from this, its latest iteration. It has, after all, already been made into a motion picture, and, yes, one of those “comic books” Bradbury, through Fire Captain Beatty in the passage quoted above, dismissed as substandard literature. (Some critics called Bradbury out when that graphic novel hit store shelves, too!) It’s even been told in immaterial form before, as an audio drama starring Michael Pennington. The story has lots none of its power through all these permutations; why, then, should its appearance as an e-book be cause for either cynicism or alarm?

“I was approached three times during the last year by internet companies wanting to put my books on an electronic reading device… I said to Yahoo: ‘Prick up your ears and go to hell’… We have got to get rid of those machines. We have too many machines now.”

I can’t argue that e-readers are one more machine, one more shiny new tech toy, perhaps cousin to the “seashells” (read: an mp3 player’s earbuds) or the wallscreen (read: a 50-inch-plus plasma TV with 3-D Blu-ray) from the book’s pages. But I can offer my own experience of reading on a Kindle. I read faster, but I also read deeper. I find I focus more closely on the rectangle of text before me. I not only remember it longer but also take more time to think about what it means. I’ll never completely abandon physically bound books, but I am no longer the e-book skeptic I once was. E-reading can, in a sense, make the text more a part of me.

I am reminded of the vision in which God gives him a scroll to eat: “O mortal, eat what is offered to you; eat this scroll, and go, speak to the house of Israel” (Ezek. 3.1). Ezekiel dutifully dines on the text, and finds it “as sweet as honey” (3.3). Contrast his experience with that of the seer John: in his vision, he takes a scroll from an angel’s hand and digs in, as commanded. “It was sweet as honey in my mouth,” John reports, “but when I had eaten it, my stomach was made bitter” (Rev. 10.10). Sometimes God’s Word is sweet; sometimes, it’s sweet-and-sour. But at all times, God’s people are called to consume it, to draw nourishment from it.

I don’t claim my close reading of texts on my Kindle elevates me to the status of a John or an Ezekiel! But the immediate, viritually unmediated engagement with a text that digitial device provides strikes me as something not too different from “eating the scroll.” No dust jacket, no paper cuts, no physical bookmarks, no torn or dogeared pages get in the way. It’s as though the Kindle screen isn’t even there–or is there as an almost literal “window” into the text. I can read the text more clearly, and so it enters me more fully.

And it’s that internalizing of a text–more specifically, of a text’s significance and values–that, Bradbury’s novel argues, matters more than the bound volume itself. 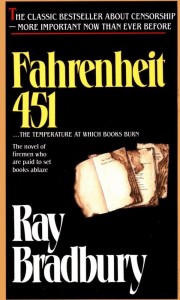 Fahrenheit 451 ends as an unthinking world plunges headlong into nuclear war. The hope the book offers for civilization’s rebirth is, as Faber, the exiled professor of literature tells Montag, not the books themselves–the physical objects–but the things inside them: the words, the ideas, the thoughts. If civilization is to rise from its ashes, it will do so thanks to the salvific work of a group of itinerant men with whom Montag falls in after the war, men who have each memorized the world’s great books. Granger, the group’s leader (his name means “farmer,” appropriately), explains:

“We are all bits and pieces of history and literature and international law. Byron, Tom Paine, Machiavelli, or Christ… We’re nothing more than dust jackets for books, of no significance otherwise. Some of us live in small towns. Chapter One of Thoreau’s Walden in Green River, Chapter Two in Willow Farm, Maine… We’re going to meet a lot of lonely people in the next week and the next month and the next year. And when they ask us what we’re doing, you can say, We’re remembering. That’s where we’ll win out in the long run.”

You see, Mr. Bradbury? You told us yourself! It’s not the paper bound between covers of gilt-tooled leather that matter: it’s the messages conveyed by the words inside. You’ve written so many of those meaningful words in your career. If those words can reach more readers now as e-ink than they could as set type, isn’t that cause for hope, not despair? Can’t this new technology give all words that matter a new way to permeate their readers–a new model in which those words can become flesh?

Christians have been given to know something about the saving power of incarnate words, and the Incarnate Word. As much importance as we place on the Bible, as much as we claim it as the inspired Word of God, we do not worship it. We worship the Word made flesh to whom the written Word points. And we pray that, under the Spirit’s continuing guidance, we ourselves will become, to a lesser but no less real degree, God’s Word made flesh–living texts that speak of God’s sovereignty, God’s judgment, God’s mercy, and God’s love.

“We’ve a story to tell to the nations,” the old hymn declares. Christ sends us forth to not only tell it but to live it, to be it–just as Granger, Montag and the others must tell and live and be the great books for a world in need of new life. How appropriate, then, that the last words of Bradbury’s book allude to the last words of the Bible. Montag and the others begin making their way to “the city,” and the former fireman rehearses his chosen, internalized text: “And the leaves of the tree were for the healing of the nations.”

A collect in the Book of Common Prayer prays that God will give us grace to “read, mark, learn, and inwardly digest” the Scriptures, “that we may embrace and ever hold fast the blessed hope of everlasting life…” Human words can give hope and sustain life, can create new worlds and reshape this one, because our words, at their best–when they speak of all that is true, honorable, just, pure, pleasing, and commendable (Phil. 3.8)–derive their force from the creative, life-giving force of God’s Word: the Word spoken in the beginning (“Let there be,” and there was); the Word made flesh, crucified, and raised to new life in Jesus of Nazareth; the Word that will one day sound for all the cosmos to hear: “See, I am making all things new” (Rev. 21.5).

All Scripture quotations are from the New Revised Standard Version. The first image of Fahrenheit 451 features the artwork found on the first edition; the other images represent later, paperback editions. The second image is the cover of the edition I first read and fell in love with at my fifth-grade school book fair.

One comment on “It Was a Pleasure to Kindle: Bradbury’s Digitial Dystopia”