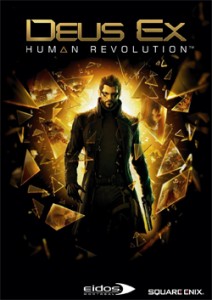 This article takes a look at Deus Ex: Human Revolution.  Is it truly revolutionary, or merely the same old thing?

I have a confession to make.  I’ve never played Deus Ex all of the way through.  Yes, a video game reviewer saying this is like a baker saying he’s never made a chocolate cake, or a mechanic saying he’s never changed a spark plug, but I disagree with all of the hype that surrounds “one of the greatest video games of all time” to begin with.  I got bored with it.  The story was intriguing, but the player progression was kind of a pain, and I basically lost interest.  So that’s where I’m coming from with this review of the game’s prequel.

To be quite honest, I have to give this game some pretty high praise: it made me want to go back and try Deus Ex again.  As a stand-alone game, Human Revolution in and of itself is great.  It is a mix between a linear First Person Shooter and a Sandbox game.  The plot has linear progression, but each level map is designed to allow the player complete freedom to choose how to progress to its conclusion.  Boss fights are featured, something that was not present in the first game (and was seriously lambasted by other critics) but even those offer variety in their execution.

Skill alone doesn’t dictate level progress, as the main character, Adam Jensen, is a cyborg that can unlock certain powers as the game advances.  Do you want to be a stealthy character?  Choose options like silencing footsteps or advanced radar to sneak around your foes.  Rather go in guns blazing?  Increase your targeting and armor.  The choices allowed to the player are vast, making each replay a chance to try out different technology.

Of course, this is where things get a little off-center.  The ability to unlock skills can happen quickly, and by mid-game, Adam Jensen can be super-powered in whichever field the player has geared him.  I found myself struggling to decide on which advancements I should unlock simply because all of the stealth-based options were already available.  For a game that is supposed to be about choice, I felt limited half-way through.  Of course, downloadable content can be added in the future that could remedy this, but alas, a game needs to be judged on its release and not on its future possibilities. 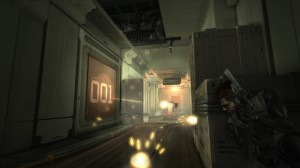 Taking a step away from the free-form gaming of Human Revolution, the true gem of this game is the story.  It does a fantastic job at guiding the player through a complex web of plotical and social intrigue as characters themselves struggle with the morality of scientific augmentation of the human body.  By the end of the game, the player is wondering to himself if the drastically enhanced Adam Jensen is more human than machine.  Interweaving each mission are choices that will alter game progression later down the road as well, making later play-throughs even more enjoyable.

One last thing: I managed to play through the entire game without killing a soul.  Not only that, but the game rewarded me for each non-lethal takedown, as they are much more difficult to execute than the running and gunning so common in other shooters.  I can’t gripe too much about a mechanic that rewards the player for doing the right thing the hard way.

They seemed a little dated, but not so much that it detracted from game play.

The voice actors were stiff, and the music was somewhat lackluster.  I like a tune I’ll be humming long after I’ve shut down my PC, and this didn’t have it.

The game mechanics are well constructed, even with the underwhelming amount of skills, and the ability to choose how to progress through each mission offers excellent free-form play.

Like I said, I killed no one through the entire game; not only that, but the questions asked within the story are ones that scientists and philosophers ask today.  A game that can make me really think and question is definitely special.

It kept me interested, which is more than I can say for its predecessor, but it still had flaws and a “plot twist” you can call after the opening cut scene.

This is definitely a title I would suggest for someone to try.  It’s got a good story, excellent morals, and great game mechanics.  Even if you aren’t a fan of FPS games, give Deus Ex: Human Revolution a try.  I bet you won’t be disappointed.