A trek through the Winter Wonderland of MMORPGs with Joshua! 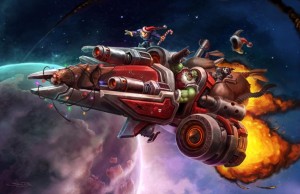 Christmas is a time for families, for celebrating the joys of being alive, and for remembering the birth of our Savior together.  Observed the world over by Christians and non-Christians alike, it’s no wonder that this holiday has infiltrated the most community-oriented experience ever known: the Massive Multi-player Online Role Playing Game.  I could think of no better way to look at Christmas than through the lens of gamers all over the world.

Arguably (and rightly so) the most popular MMORPG of all time, World of Warcraft (or WOW) offers gamers the opportunity to play as one of the two factions in the land of Azeroth; the Alliance or the Horde.  Blizzard, the game’s designer, works hard to keep both factions balanced, making play entertaining for either side.

Players of WOW have a host of quests and programmer-offered presents culminating in the multi-week-long celebration called The Feast of Winter Veil.  There are a variety of events that players can participate in, most with a winter or Christmas theme, including the ride of Greatfather Winter, who takes the form of a jolly dwarf or insane orc, depending on the kind of character the player is.  Interestingly, the WOW programmers have emphasized the commercialized nature of the holiday, perhaps reflecting the real-life nature of the season. 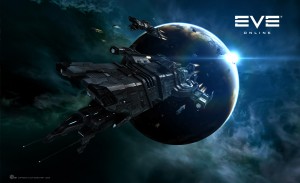 A true Sci-Fi RPG, Eve Online is a game taking place in a galaxy with over 7,500 star systems.  With different races and factions within each species, players have a lot of opportunity to carve out a niche for themselves in the gaming world.  Skill upgrading takes place in Real Time, or in the time span of the real world even when not logged on to servers, making it something that casual players have an opportunity to excel at; it removes the relentless “XP grind” that requires hours of constant gameplay to raise character levels.

Eve Online doesn’t have a particular server-hosted holiday celebration, yet they do offer a sereis of holiday gifts; in prior years players recieved a single offering from the programmers, but this year they are offered a choice .  A multitude of message boards have sprouted up to discuss their individual effectiveness, and the pros and cons of each choice.  I’m not sure if there are player-based celebrations as well, but I’m sure a few guilds have their own way to commemorate the holiday season. 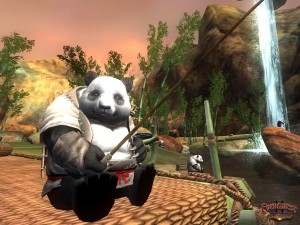 The Everquest name has been the longest running franchise for MMORPGs, and the sequel continues the trend with updated graphics and gameplay.  Occupying the world of Norrath, players can pick from a variety of races and venture forth in a primarally Player-versus-Environment (or basically player versus programmer) experience.  Everquest is very guild-oriented, offering bonuses to those involved in organized groupings of other players.

For the Winter Season, the game opens up Frostfell Wonderland Village, offering gifts and the like to gamers.  there are a variety of season-specific quests that players can partake in for a limited time, including ones new to this year.  The guild-syle play rewards completing these quests with friends, making it a true collaboration between compatriots.

The common thread between all of these MMORPG celebrations is presents, but that doesn’t mean that these companies have completely commercialized Christmas.  The important thing to remember is that loot plays an important role in such games, and the giving nature of the season only helps to promote those feelings of good cheer.  Especially in WOW, there is a dramatic comedy about the whole process, making light of the financial aspects to the holiday; observing this only brings an acknowledgement of how commercialized our lives have become, and how dedicated to gift-giving Christmas can be.

Christmas is a time to remember our Savior and celebrate his birth, and I cannot fault major video game studios for not including Jesus in their festivities; there is no Christ in Azeroth.  A true celebration of His birth, though, is also bringing people together in friendship.  In these games you don’t often see the person controlling the Night Elf or the giant battle cruiser, you just know that they’re a friend, someone you can spend some time with, who is there without being there.  MMORPGs give us the opportunity to connect and be together in this Glorious Season, and that is an aspect to Christmas that MMORPGs get right.