The Christmas season is a time to rejoice; a time to spend with loved ones and to be thankful for the greatest gift of all: our Lord, Jesus Christ. Unfortunately, some may find Christmas to be the loneliest day of the year—and feeling alone can be quite miserable.

When I was in high school, I read a 24 issue comic book mini-series by Brian Augustyn and illustrated by 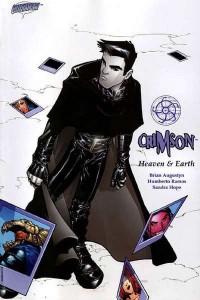 Humberto Ramos called Crimson. Crimson is the tale of Alex Elder, a teenage boy who is misfortunate enough to be attacked by a gang of vampires—resulting in Alex becoming one himself. I won’t go into major detail or describe all of the plot points, but this book deals with the age old issue of good versus evil in a daring way.

For years, I had wondered if Brian Augustyn was a Christian and when I met him at a Youth Specialties conference, my suspicions were confirmed. I had pondered that question because of the issue of Crimson that I will focus on entitled, “Hark.” The first page is broken up into a few panels depicting Alex Elder, with a desperate look in his eyes, staring up at the beautiful snow falling from the sky. Each panel has a text box which is read by an omniscient narrator. The text reads, “It’s beginning to look a lot like 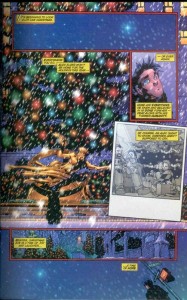 Christmas. Everywhere you go. Alex Elder won’t be home for the holidays this year—or ever again. Home and everything he knew and believed in is gone forever—dead along with his former humanity. Of course, as Alex ought to know, vampires aren’t supposed to cry. Besides, Christmas Eve is a time of joy and laughter…a time of hope.” Right away, his loneliness is revealed. On the following page, Alex encounters a small child, outside under a bridge, bundled up for the winter, selling flowers. He buys all of the flowers from the child. The final panel of the page reveals the child smiling. 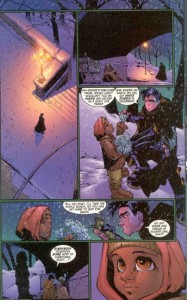 As the story progresses, Alex is in a diner, alone, when a group of strange visitors come in. The drifters turn out to be angels, making it their duty to judge the righteous and unrighteous. They believe that Alex has great power as a vampire and they are unsure of whether he will use it for good or for evil. One angel even mentions their “boss” and says, “We pride ourselves on our initiative—on anticipating the Creator’s whims.”

The angels seem to have differing opinions with those in favor of sparing Alex’s life outnumbered. Judgment is set and Alex is about to be destroyed when someone comes in to save the day. Who might that someone be? Probably not whom you were thinking: Lucifer. That’s right! Satan himself joins the party, most likely because he has his own plans for Alex. 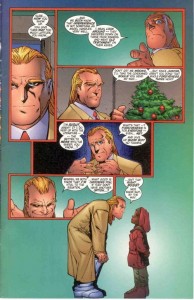 As Alex leaves the diner, Lucifer begins to speak to someone whom the reader cannot see. He sarcastically remarks, “Don’t get me wrong, I’ll take the condemned souls you send my way…but since Junior, aren’t you doing that whole forgiveness thing now? I’m right aren’t I? I do keep up with the literature—the better to mess with the sheep, you know…? What’s that–? Forgiveness is for everyone—even…me? And give up showbiz? No thanks. Besides, we both know that I’m vital to the equation…what good is choosing you, if they don’t have another option…? Isn’t that right…boss?” At this moment, we finally see whom Satan is speaking with: the little child from the beginning of the issue.

The last two panels relay a beautiful message. Alex meets the child again. He is offered another flower, but has no money. He quickly realizes that it is a free gift. Alex’s smiling face ends the issue.

Isn’t that what Christmas is all about? – the birth of the Messiah and the free gift of eternal life? See, Alex believed that the events that had shaped his life had stolen his humanity and that he would be alone, eternally. But he was never alone. What he was missing was the other supernatural forces at work. The supernatural God that says, “And behold, I am with you always, to the end of the age.”

There have been times in my life where I have felt as though I was alone, with no one to share my life with. I have a wife now, and she truly makes that longing feeling for something deeper and truer fade away a bit; however, it doesn’t end with her. No matter how hard I try to fill the lonely void within my heart, it will always be empty. Thankfully, the sacrifice and promise of a loving God have provided me with an assurance that I never have to be alone. May you find that assurance this Christmas as well.