I love Christmas and I love tradition. Every year as we setup the tree in August, The Santa Clause has to be playing in the room with me. The reasons are simple. First, it makes me laugh. Second, everything about it is so familiar to me that it triggers in my mind the Christmas season is here. Finally, it reminds me of loved ones who are now with the Lord and it serves as my personal memorial to Gram. It is a reminder that though she’s with her creator, that I carry a part of her with me along with my whole family every Christmas season. For me, The Santa Clause is a Christmas essential. 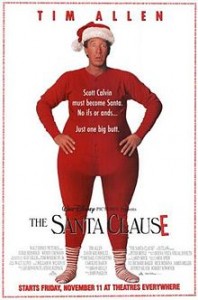 In this 1994 Tim Allen film, Allen plays Scott Calvin, an unlikable toy company executive. His relationship with his ex-wife, her boyfriend Neil (Judge Reinhold has the best sweaters), and his son Charlie are horrible. One Christmas Eve, he and Charlie have a chance meeting with Santa Claus, which leads to Calvin donning Santa’s coat and agreeing to the Santa Clause. The “clause” is the legal obligation to surrender your own life and take on the position of the magical Santa Claus. Calvin struggles with his new identity, and if he even believes it, as his body and heart take on the Santa Claus identity. Will Calvin accept his new role or will millions of children be disappointed when Santa does not finish his rounds?

Beyond the sentimental feelings this film gives me, I really do love it. The story plays on “traditional” beliefs on Santa Claus and injects them into our world. The naughty and nice list is there, elves and the workshop, the reindeer, sleigh, a night full of deliveries and even cookies and milk all appear in this movie. It’s a Santa that we all know, and the movie is safe for the whole family. It provides us an explanation of this beloved character and his magic, and I can’t say enough that Tim Allen is a comedic genius. The one liners he delivers still make me laugh all these years later after multiple multiple views. I actually say them with the film at this point as my tree goes up. “If you ask: what will I be doing on Christmas Eve? I’ll be choosing between skinning a cat, cleaning shotguns and drinking brown liquor!” Hearing these one liners every year kicks off my Christmas in the very best way.

There is also a deep spiritual question in this holiday offering. What is believing? Scott Calvin struggles with believing in Santa Claus, the North Pole, and the legacy that he has inherited. He sees the polar bear directing traffic, but he does not believe it. Judy the elf explains to Scott that most boys and girls never see the North Pole, yet they still believe in the power of Santa and Christmas. Judy says, “Seeing isn’t believing: believing is seeing.” Interesting, Judy; that sounds exactly like another situation I know of. I worship an invisible God, at least to my eyes and general sensory perception; yet, though I can’t see, I know He is there. Jesus speaks to Judy’s wisdom in a conversation with His disciple, Thomas after His resurrection: “Because you have seen me, you have believed; blessed are those who have not seen and yet have believed (John 20: 29, NIV).” Sometimes the power of believing is not the miracle you see, but the miracle you know exists because the truth of it is deep within your soul. That’s not magic; that’s power!

Tradition is important at Christmas time. It helps us and our kids have a foundation to understand important themes this time of year including faith and family. For me, part of my tradition is a viewing of not just The Santa Clause but also its two sequels The Santa Clause 2 and The Santa Clause 3: The Escape Clause. By following this tradition I have an opportunity to remember a beloved family member and discuss with my children the attributes of Santa Claus that point towards Jesus. For my family, Santa Claus is a figure that helps my family review what matters most at Christmas. I urge you to start a tradition of your own for your family. If The Santa Clause is not for you, perhaps you could start with this gift I give you; a classic rendition of “Carol of the Bells.”