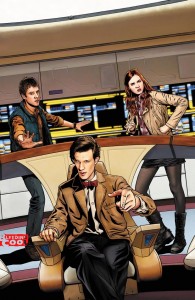 It wouldn’t be Sir Patrick Stewart and Matt Smith sharing the screen, but it might well be the next best thing–if reports are true. According to Bleeding Cool, IDW, fresh off its crossover between the original Star Trek characters and the Legion of Super-Heroes, will publish an enterprising, timey-wimey, wibbly-wobbly, spacey-wacey meeting between Doctor Who and Star Trek: The Next Generation.

While the thought of such an event sends all sorts of nerdy shivers down my spine (and perhaps yours, too), there’s no official confirmation from IDW regarding this project as of this writing. Several IDW editors and writers are, however, scheduled to appear at the big Gallifrey One convention next week. As Bleeding Cool speculates, an announcement may occur in that venue.

Assuming the word is given (ah, but will that word be “engage” or “run”?), what would you want to see were the TARDIS to materialize on the 1701-D’s transporter pad? Data and Rory (“I was plastic!”) commiserating about existence as sentient beings inside artificially constructed bodies over tea in Ten Forward? Doctor Crusher giving Amy advice about parenting a time-and-dimension-traveling child? The Doctor and Captain Picard chasing down some fish custard with Earl Grey (hot) in the ready room? An answer to that burning question: the sonic screwdriver won’t work on wood, but will it work on Worf?

I’ve been disappointed by media tie-in comics before (and, frankly, stopped picking up both IDW’s Doctor Who and Star Trek ongoing monthlies)–but, if this project is indeed put up for pre-order, I’ll be hard pressed not to add it to my pull list. Geronimo and make it so!

4 comments on “Space (and Time and Dimensions Thereof), the Final Frontier…? (Comics Rumor)”