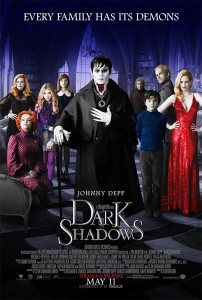 When I was a kid NBC attempted a revival of a 1960’s vampire soap opera called Dark Shadows. It was something that my parents seemed interested in, but for me it seemed overly, well, dramatic. I just did not get the adventures of vampire Barnabas Collins, so when it was cancelled 12 episodes later I never noticed.

But now we live in the vampire rennaisance. And as we know the more emotionally damaged the vampire may be, the better right now. So, 1991 may have been a bad time to resurrect Dark Shadows but some think now is the right time to bring back this cult favorite. Here is the trailer for this big screen take at the franchise coming to your local theater in May.

I have to admit, I’ll a little optimistic! Burton has brought back his frequent partner Johnny Depp who has made a career off “odd” characters. Danny Elfman composed the soundtrack, as we would expect from a Burton film. But adding to my optimism is that the screenplay was written by Seth Grahame-Smith of Abraham Lincoln, Vampire Hunter. This could just be the right mix of camp and art that may keep me from asking why Barnabas is not sparkly! What do you think?