I wasn’t familiar with this project until I saw the trailer, but I have high hopes. My entire family loved How to Train Your Dragon (I thought it’s probably the best thing Dreamworks Animation has produced since the original Shrek), and it’s good to know many of the same talents responsible for that film are involved in this one. Plus, look at that voice cast: Chris “Captain Kirk ’09” Pine, Alec Baldwin, Jude Law, Hugh “Wolverine” Jackman… And, of course, you’d be hard pressed to pitch a more kid-friendly premise than “Santa Claus, the Easter Bunny, and the Tooth Fairy head up an epic mission to save the world.” (I mean, Santa’s already conquered the Martians. How hard could a wicked sprite be?)

I realize this movie is likely aiming to be nothing more than feel-good family fare for the holiday season. I’m not expecting any deep philosophical or theological insights. And I’m no hater when it comes to secular appropriations of Christian holy days (or, at least, I try not to be as hard-nosed a hater as I have been; otherwise, would I have bothered to bring you five fabulous sci-fi and fantasy Santa sightings last December?). It’s not as though either Christmas or Easter have ever been completely free from non-Christian elements (the Puritans considered Christmas such a lost cause they skipped it altogether, and Easter’s very name derives from a pagan fertility goddess–that’s why the Orthodox still call it “Pascha” and other Christians prefer to call it “Resurrection Sunday”). In an odd way, the fact that so many people who don’t share the Christian faith can still celebrate around its highest and holiest festivals testifies to the ongoing, secret work of the Holy Spirit and the grace of God that goes before all of us. Santa and the Easter Bunny aren’t the point, of course, but neither are they the enemies. I confess, though, that something within me still rankles to see them starring as the heroes of a big-budget animated blockbuster. (Tooth Fairy, we’re good; I’ve got nothing against you.)

I can’t fault what seems to be the movie’s moral center: the truth that hope trumps fear every time. But real hope isn’t found in make-believe characters, no matter how benign. Santa’s voiceover above notwithstanding, the one who really guards us with his life–the one who in fact gave his life “to liberate many people” (Mark 10.45, CEB)–is Jesus Christ.

The sixteenth-century Heidelberg Catechism puts it so well, in an opening question and answer that have justly etched themselves into the minds and hearts of generations of believers:

Q. What is your only comfort in life and in death?

A. That I am not my own, but belong—body and soul, in life and in death—to my faithful Savior, Jesus Christ.

He has fully paid for all my sins with his precious blood, and has set me free from the tyranny of the devil. He also watches over me in such a way that not a hair can fall from my head without the will of my Father in heaven; in fact, all things must work together for my salvation.

Because I belong to him, Christ, by his Holy Spirit, assures me of eternal life and makes me wholeheartedly willing and ready from now on to live for him. 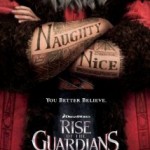 We worship and serve a strong and mighty Savior, who has promised, “I give them eternal life, and they will never perish. No one will snatch them out of my hand” (John 10.28, NRSV). While our response of faith is critically important, our Guardian’s protection doesn’t extend only as far as we believe in him. When we are his, we are his forever.

Perhaps Rise of the Guardians will give those who minister with children and youth–as well as their grown-ups!–not only a fun night at the cineplex but also a chance to talk about the real “reasons for the seasons” of Christmas and Easter, discovering and delighting again in the incarnate, crucified, risen, and reigning Guardian, “our Lord Jesus, the great shepherd of the sheep… to whom be the glory forever and ever” (Heb. 13.21, NRSV).

4 comments on “Hippity, Hoppity… Santa’s on his Way? (Movie News)”