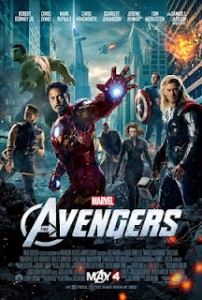 I am a big fan of using superhero stories to teach spiritual truths.  These stories always point to things bigger and more fantastic than the material world which we see and interact with everyday.  They invite us into big stories, and I believe that God has called us to live a big story.  So, I am very much inclined to love a good superhero tale.

Needless to say, when Samuel L. Jackson made his first appearance at the end of Iron Man in 2008 and casually mentioned this thing called the Avengers Initiative, well, he had my attention.  I am an X-Men guy, but there were a lot of things that could be done with an Avengers property.  The daydreams of where this could go, not knowing yet what movies were to come, were fantastic.

From Iron Man to Captain America: The First Avenger, we have been introduced to our heroes.  We have met men and women that stand strongly to defend the innocent against evil.  And in five movies they have pushed that evil back into the darkness; but we have also met flawed characters.  Tony Stark, Thor, Bruce Banner and even Steve Rogers have all had to overcome their demons, primarily their egos, in order to find success on the battlefield and win the day for the light.  Tony Stark is a great example: on his own, the man is self destructive, unlikable and as much of a threat to others as a help.  It’s true, boys and girls, Iron Man is not perfect.

Of course, the wisdom books of the Old Testament have a lot to say about this.  We are advised that “God helps those that help themselves!”  Clearly, Tony Stark could overcome his flaws and personality on his own.  He does not need mentors or comrades since God expects us to overcome our problems on our own.  Sadly for me, this line questions the whole reason for us needing an Avengers film.  Maybe Marvel shouldn’t have bothered!  But wait: that’s not in the Bible!  It may be a phrase we have heard thrown around and at time attributed to the Bible, but that’s not Biblical truth.

So what is true?  What do the Wisdom books have to say about man and the need to overcome alone?

The book of Ecclesiastes paints a very different picture.  The author advises,

Two are better than one, because they have a good reward for their toil. For if they fall, one will lift up his fellow. But woe to him who is alone when he falls and has not another to lift him up! Again, if two lie together, they keep warm, but how can one keep warm alone? And though a man might prevail against one who is alone, two will withstand him—a threefold cord is not quickly broken (Ecc. 4:9-12, ESV).

It appears to me that the Bible advocates The Avengers formula.  Together heroes are greater than one.  Trials that would break one person can be overcome by two.  Together, a team is unstoppable.  No, the Bible does not advocate the one man band—instead, God is recommending the super hero team-up.  Stan Lee was onto something spiritually true in 1964 when he realized one hero was better than one.

Along with added strength, togetherness fosters self improvement.  We find in Proverbs an often quoted passage, “Iron sharpens iron, and one man sharpens another” (Proverbs 27:17, ESV).  One believer can strengthen another.  Through debate, conversations and just doing life together, we can and do make each other better.  Tony Stark is a truly flawed man, but the fact that he can spend time with Steve Rogers and his Boy Scout personality can challenge Tony to be a better man.  Likewise, Tony can encourage Steve to better integrate into the society he finds himself living in.  Even great men can make each other greater!

From the beginning of human existence we were never meant to be alone.  In Genesis we find, “Then the Lord God said, “It is not good that the man should be alone; I will make him a helper fit for him” (Genesis 2:18, ESV).  It’s been a spiritual truth since Adam that we have needed to be part of a team.  Man was not meant to be alone!  Believers were not meant to struggle alone!  And even for those of us who are not meant for marriage, we are not whole unless we have others on our team.

If I could give some practical advice rolling down from The Avengers, I suggest getting yourself around people.  You need a tribe, entourage, posse, circle, tribe, community, family or whatever you may call it to do life with.  If you are alone, you will be weaker than you need to be.  You need to share your life with others so you can be strengthened and you can strengthen others.  Captain America makes Iron Man better; why shouldn’t that formula work for you?  For me, I have a global network, because one guy is currently deployed overseas.  In this group, I can send out a message and quickly get advice on spiritual and earthly matters.  These guys are available for me and I am there for them.  A few go to church with me, but others follow different traditions than me within our faith!  But, they all believe in Jesus and believe in me.  If you don’t have this, go get it.  If you need a place to start, go get involved in your local church and let others share in your service.  You cannot save the world alone, so join a team!