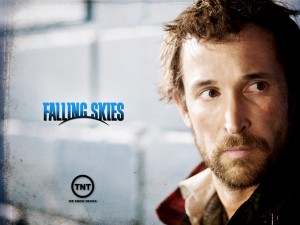 Last summer TNT’s Steven Spielberg produced sci-fi drama Falling Skies became appointment television in my house.  Appointment not because I watched it live during its airing, but because Matt Anderson would come over and share in the viewing from my DVR.  It was a fun show to share with a fellow Sci-Fi Christian with a mix of action and spiritual questions for us to chew on.

As a parent and with a history degree or two, Noah Wyle’s character Tom Mason resonates with me.  Of course military history majors would make the best scouts!  Actually many viewers will enjoy Mason’s common sense and appeals to fairness in the extreme conditions of an alien invasion.  Additionally, parents will find themselves mulling over how they would work to keep their families together in the face of a global extermination event.  And this includes the question of how old should one be to fight for their own survival as part of a militarized unit.

An added bonus was two characters debate the purpose of faith in their world.  Will Patton’s Captain Dave Weaver is a man who has lost his faith.  In the alien invasion his ex-wife and daughters have gone missing.  He now leads the 2ndMassachusetts Militia Regiment and a group of civilians including Tom Mason.  He is a man who has thrown himself into his job with no family or faith to fall back onto.  But Seychelle Gabriel’s Lourdes has held to her faith throughout the invasion.  In fact, it is her faith that gives her the strength to serve others within their refugee band as a doctor’s assistant after being a medical school student.  The conversations between these two often sound like Lourdes may have listened to the early Sci-Fi Christian podcast episodes.

Season one ended with Tom Mason entering an alien spaceship?  Didn’t Admiral Ackbar teach us something about traps?  Will this be Falling Skies jump the shark moment?  Or was that when they brought down an alien spaceship with a shot that would make Luke Skywalker proud!  Season two will premier on June 17th.

To catch yourself up if you have not yet seen an episode of Falling Skies there are a number of trailers available for season two.
http://youtu.be/Ud9eGpNtpcY

And they have released the first few minutes of this season’s first episode.
http://youtu.be/Tg8sujxWids
Additionally, TNT has prepared a short video that provides you an overview of the alien invaders that the survivors of the 2nd Massachusetts Regiment must survive.

Remember to make every shot count if you plan to survive Summer 2012!