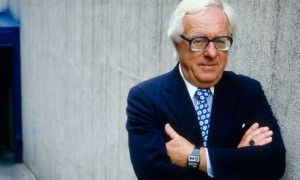 Ray Bradbury, legendary science fiction and fantasy author (although he chafed at being “pigeon-holed” as either) whose classics include The Martian Chronicles and Fahrenheit 451, has died at age 91.

At the conclusion of Fahrenheit 451, Bradbury pictures men who have memorized the world’s great books moving along a river’s banks, toward a city, resolving to rebuild a world destroyed by immediate gratification and ignorance. Guy Montag, the novel’s protagonist, reflects on ancient words whose source he does not know but whose significance he nevertheless intuits: “…and the leaves of the tree were for the healing of the nations” (Rev. 22.2, KJV). Montag and his fellow rememberers–people who embody and speak timeless texts, who have become, in a sense, words incarnate–join hands as they look to the future.

As I reflect on that scene, I remember another piece of Scripture: “Let the favor of our God be upon us, and prosper for us the work of our hands–O prosper the work of our hands!” (Ps. 90.17, NRSV). Fahrenheit 451, like much else of Bradbury’s work, not only invites but challenges readers to consider the mark they will leave on the world (see, for example, how human astronauts choose to plunder or preserve Mars’ ancient cities in The Martian Chronicles). What will the work of our hands be–and does it deserve to be prospered?

In daily prayer yesterday, I discovered this verse from the apocryphal book of Ecclesiasticus (Sirach), words spoken by one who sought wisdom: “As my reward the Almighty has given me the gift of language, and with it will I offer praise to God” (51.22). While Bradbury did not identify himself as a Christian, I can’t help but believe God gifted him with a love of language and a way with words that has already benefitted and will continue to benefit generations of readers. Perhaps the way his tales inspire, disturb, and motivate so many to seek a future for the good of all people is an offering of praise to God in and of itself.

For that reason, I will pray that the Lord continue to prosper the work of Ray Bradbury’s hands.

6 comments on “On the death of Ray Bradbury”