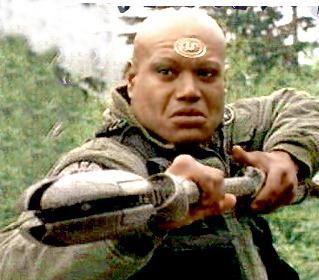 “Weeeellll, this is nice!” the Doctor’s smile stretched across his face as he surveyed the arena. Humans were everywhere. Some were dressed like him, or even his Tardis; others were dressed in funny Egyptian garb or military-like clothing. His gaze brought him straight ahead to a tall, dark, bald man wearing the same military outfit and holding a long staff weapon. The Doctor placed his hands in his pockets. His smile faded.

“They’re expecting us to fight…you big, bronzed warrior, you,” he said, not taking his eyes off the man. “What’s your name?”

“I am a Jaffa, Teal’c of Chulak, warrior of the Tau’ri,” he tilted his head and gave a slight bow.

“Well, Teal’c of Chulak,” he said, annunciating his words, “I don’t think you want to fight. We could be the best of friends, you and I,” his smile coming back.

“Indeed,” he tipped his head again. “I have fought and conquered many to get this far; however, I do not wish to fight you. I have heard of your deeds across the galaxies. You are a friend to Tau’ri and a friend to me.”

“What d’you suppose’ll happen if we forfeit, Teal’c?” the Doctor asked.

“You will not forfeit. I will,” at this, Teal’c placed his staff weapon on the floor of the arena, stood tall, and stretched out his arms. “I will not play your games any longer!” he shouted, looking toward the sky.

Just then, a flash of light appeared from the audience and struck Teal’c in the chest, knocking him to ground.

“No!” the Doctor shouted as he ran to his fallen companion. He lowered himself to the ground and lifted Teal’c’s head onto his lap.

“Oh, come on! We have so many adventures to go on together. So many places to see!”

“I have seen…many places, I have fought for the Tau’ri, but now it is time…” Teal’c breathed his last.

“You were glorious,” the Doctor whispered. A large worm-like creature slithered out of Teal’c’s body and fell limp on the ground. “And so were you.”

The Doctor stood up, the weight and anger of a thousand years and a thousand atrocities in his eyes.

“Why?!” he shouted. “Humanity has come so far only to regress,” he cried, pointing to Teal’c’s dead body on the ground.
The Doctor sat down and crossed his legs, awaiting his final match, thinking—scheming –devising a different way to end things.

3 comments on “The Battle Royale Semi-Finals: The Doctor vs. Teal’c”