Greetings and felicitations! We’re one day closer to the 30th birthday of Star Trek II, and no one can accuse us of treating it like a funeral. I hope you’re enjoying reading this commemorative countdown as much as I have enjoyed preparing it. A few readers have mentioned that they’ve never seen The Wrath of Khan. Luckily for them, it’s the weekend! No better time to fire up the DVD player or streaming device, pop some popcorn, and—like Admiral Kirk and his inspection of the Enterprise—put off whatever else you have to do until “later!” 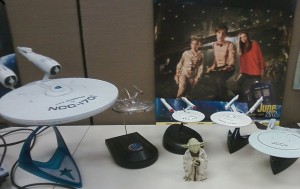 For a time in my (increasingly distant) adolescence, I made much of being a Star Trek snob. Oh, I didn’t call myself that, you understand. But I was one of those Star Trek fans: the kind who insisted on being called a “Trekker,” and never a “Trekkie” (I answer gladly to either these days)… who contended that debating the intricacies of divergent timelines or Federation polity was a far, far better expression of fandom than wearing Spock ears or collecting toy starships (for the record, I’ve still worn Spock ears a grand total ofonce in my life—but my cubicle at work is a drydock for five versions of the Enterprise)… and who, above all, proclaimed loudly and at length to anyone who would listen that Star Trek was better—no, not just better: morally and spiritually superior—to Star Wars because “Star Wars is all about explosions and shoot-em-ups, but Star Trek is all about Big Ideas.”

Of course, that’s just a big load of Bantha poodoo. I stopped pitting Gene Roddenberry’s universe against George Lucas’ a long time ago, and I am definitely grateful that the Star Wars movies gave the Star Trek ones a few pointers about action. While I am not one to disparage Trek’s first big screen outing as “the motionless picture,” I grant that it… well, it moves at a leisurely pace. As others have observed, its model is Stanley Kubrick’s 2001—and, given The Motion Picture’s high concept and grand themes, that’s just as it should be. I don’t even agree with Deforest Kelley (rest his soul), who, I’ve read, told an interviewer around the time of Star Trek II’s premiere, “This is the movie we should have made the first time.” The Motion Picture is probably the purest science fiction Star Trek has yet delivered, and I’m glad it’s a part of the canon.

But I’m also glad director Nicholas Meyer wanted to liven things up with Star Trek II by envisioning it as essentially a submarine warfare movie set in outer space. Without sacrificing the big ideas (see yesterday’s comments on Genesis) or the character work (see yesterday’s comments on Kirk, Spock, and McCoy) that help define the series, the movie also shows Star Trek can yield some thrilling action sequences. They’re not as breakneck-paced as the rollercoaster rides of the Star Wars films, but they’re an awful lot of fun. And even though much of Star Trek II is “slow” by today’s cinematic standards, even my son was gripped by the final Enterprise and Reliant showdown. I was glad, since I’ve been gripped by it for thirty years!

“Starfleet has kept the peace for a hundred years…”

Carol Marcus’ reason for refusing to believe Starfleet is behind the hijacking of the Genesis Project marks the first precise onscreen dating of Starfleet’s history (much as the movie’s title card marks the first definitive dating of the original series’ era as the 23rd century). The line occupied the attention of chronology-concerned (or -obsessed) fans for years before the franchise finally linked a stardate to a date we would recognize in The Next Generation’s first-season finale. Of course, Carol’s comment raised nearly as many questions as it answered. Were we to infer Starfleet had only actually existed for a century and had always kept the peace, or that it had only known a century of unbroken peace by the time of the movie? Inquiring fans wanted to know!

13. The Genius of James Horner

Commenting on 1 Corinthians 13, biblical scholar William Barclay wrote, “Some passages call not so much for explanation as for illustration.” At the risk of seeming irreverent, I think that sentiment also applies to James Horner’s brilliant score for Star Trek II. Watch this isolated score presentation of the battle in the Mutara Nebula and see if you don’t agree:

I have no formal musical training. Others more knowledgeable than I have written about the reasons Horner’s work deserves acclaim, so I’ll just say this: Several film scores give me goose bumps as I listen to them, but Horner’s score for Star Trek II gives me goose bumps just thinking about it. 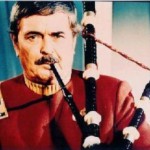 James Horner resisted the inclusion of “Amazing Grace” during Spock’s funeral. It was, as the folks at Filmtracks point out, “a cue Horner fought strongly against (calling the bagpipes ‘bleating goats’) despite falling in love with the general regional sound later in his career.” But since Scotty and his bagpipes (like the proverbial “kid”) were obviously “staying in the picture,” Horner compromised—beautifully. He delivers a brief but warm and lush orchestration of the classic hymn tune, picking up where Scotty’s mournful pipes leave off, before effortlessly melding the melody with his own haunting “Spock theme” (a tone poem that he would use to wonderful effect as the backbone for his Star Trek III score—if you have never listened to Horner’s two Trek scores back-to-back, you owe it yourself to do so; you are in for a treat).

As I wrote here at the SFC last November:

As much of a Trekkie as I am, I’ve always bristled at that universe’s unbridled confidence in human potential. I’ve tended to agree with novelist and Presbyterian minister Frederick Buechner, who places his faith in the Holy Spirit because “the human spirit just does not impress me that much, I am afraid”… But as he squeezes those bagpipes… Scotty provides a musical benediction… a promise of blessing and peace and, indeed, “amazing grace”… Those wailing pipes offer all of them, and all of us, a musical metaphor for the benevolence of our Father in heaven, who “makes his sun rise on the evil and on the good, and sends rain on the righteous and the unrighteous” (Matt. 5.45). The sweeping scope of God’s grace can never be underestimated—and Scotty’s bagpipes give me hope that it sweeps even into Gene Roddenberry’s secular vision of the human adventure.

Remember those “grace notes” in the script I like so much? Here’s another one, playing on Dr. McCoy’s famous fear of transporters. The set-up, you may remember, is that Kirk, McCoy, Saavik, Chekov, and Terrell are about to beam to coordinates deep inside Regula which is, as Saavik points out, “a planetoid we know to be lifeless.” Listen to McCoy’s worry and Kirk’s reply here.

Tomorrow, no day of rest for the Khan-tdown, as we start handing out the acting awards!