Today we close in on the half-way mark in our countdown to the 30th anniversary of Star Trek II. Helm, ahead warp point-five: today brings much food for thought. This is no little training cruise, after all!

When the Enterprise arrives at Regula One, Kirk decides to beam over to the space station despite the unknown dangers of the situation. As he, Saavik, and Dr. McCoy start to leave the bridge, Spock says, “Jim, be careful.” In the shooting script, the scene ends there—but not onscreen. Clearly put out at not being explicitly included in Spock’s concern, McCoy replies, “We will.” All Spock can do is arch that famous eyebrow. It’s a quick, nearly throwaway moment, but it proves (as though there were any doubt) Deforest Kelley’s mastery of his character, and  is one of the many “grace notes” that make Star Trek II such a pleasure.

19. The Triumvirate in Action

Spock: As a matter of cosmic history, it has always been easier to destroy than to create.

McCoy: Not anymore! Now we can do both at the same time!…

The scene in which Spock and McCoy join verbal battle over the ethical implications of the Genesis Project perfectly captures their characters, so much so that Nicholas Meyer chose to expand it (albeit slightly) for the Director’s Cut DVD. (I can’t find any video of the scene online, but you can listen to the audio while gazing at the face of an extremely agitated Dr. McCoy here.) 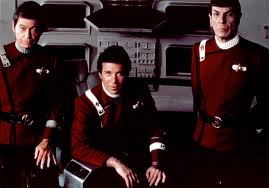 Casual viewers and serious critics alike have observed that the relationship between Kirk, Spock, and McCoy stands at the heart of classic Star Trek. The debate scene in Kirk’s quarters confirms this judgment. The connection between these three men matters for not only dramatic reasons but also psychological ones. As ever, Spock represents the intellect: logic, reason, dispassionate analysis of the facts. McCoy articulates the emotions: sentiment, passion, knee-jerk reactions and “gut feelings”—factors that don’t always mesh with critical thinking but nevertheless often demand consideration when we make decisions. And Kirk considers and mediates the two. He is the “superego” to Spock’s “ego” and McCoy’s “id,” the regulator between the mind and the heart. Granted, the admiral does little mediation in this specific moment—Saavik’s call from the bridge interrupts the discussion, and the movie really starts to pick up steam—but, in the Enterprise’s climactic showdown with the Khan-commandeered Reliant, it is Kirk’s uncanny blend of logical analysis (taking advantage of Khan’s inexperienced, two-dimensional thought patterns) and emotional insight (knowing how to goad Khan into a foolhardy response) that—almost—carries the day (for it turns out Spock has, by this point in the series, learned something about integrating the heart and the mind, too…)

“According to myth, the Earth was created in six days. Now, watch out! Here comes Genesis! We’ll do it for you in six minutes!” – McCoy

Friends who know I am both a Trek fan and a Christian sometimes ask, “Do you get upset when, in Star Trek II, Doctor McCoy calls the Bible a myth?” For the record, I don’t. First, I don’t expect every character in every movie I watch to share my beliefs. (How boring would that be?) Second, Bones doesn’t dismiss the whole Bible as a “myth,” just one detail of one of Scripture’s creation accounts—and, from a literary standpoint, he is correct. Genesis 1 is, strictly speaking, a myth: not an untruth, but a narrative around which people organize their lives and from which they seek meaning. And, third, even if the good doctor is (as I allow he likely is) using “myth” in its popular sense as synonymous for “fairy tale,” I don’t think his words ought stop anyone, of any or no religious tradition, from considering the cautionary note he sounds. As Kirk says, the Genesis Project is “the power of creation.” That is not a power to be wielded lightly. In introducing the Genesis Project, Star Trek II gives characters—and the audience—an appropriately weighty moral matter to wrestle with. This science of radical terraforming carries with it ethical complications and obligations, a reality McCoy grasps.

As I’ve mentioned before in this forum, Christians believe that our creative God made us creative, too. Our capacity for creation is surely part of what it means to have been fashioned in the imago Dei, the image of God. But how do we discern when we have overstepped the bounds within which God wants us to create? When does our appropriate “dominion” over God’s world, God’s kosmos, become overbearing “domination”? When do our attempts to improve the world harm it, and us? Star Trek II offers no easy answers, but ample space for introspection, exploration, and discussion of an important issue. (Here’s hoping the sequel to Abrams’ 2009 Trek takes a page from Star Trek II’s book in this regard.)

17. The Genesis of Pixar

“Well, the tape was made about a year ago…” – Kirk

If you (or, if you’re a parent, your children) have enjoyed the movies of Pixar, you can thank Star Trek II for helping launch what is today that computer animation juggernaut. At the time, it was still the Lucasfilm computer graphics division, as this documentary explains (it’s choppy footage, but well worth a look):

The Genesis simulation is one of the most memorable sequences in cinematic Star Trek. Three decades later, it’s still impressive. I recently watched the movie with my ten-year-old son, who’s been raised on the special effects standards of the Star Wars prequels. Even he said “Wow! Cool!” as the Genesis Wave worked its magic on that barren planetoid.

“You’ve got to learn why things work on a starship.” – Kirk

The “by the book” code (see #26) is pretty cool, but Kirk’s use of the Reliant’s prefix code to order the enemy ship to lower its own shields is downright brilliant. It’s a fantastic sequence—consider Kirk and Sulu’s sotto voce dialogue just before delivering the punishing blow; Khan’s wide-eyed disbelief at how quickly and decisively the tables have been turned against him; those wild, sweeping insert shots of Reliant’s command console; and James Horner’s perfect scoring of it all. The moment is even more thrilling–and, frankly, chilling–when you realize just how narrow an escape the prefix code provides. As Kirk tells McCoy in a scene cut from the theatrical release, “We’re alive only because I knew something about these ships [Khan] didn’t.” The scene illustrates how Star Trek II can accomplish so much on simultaneous levels: an action-packed set piece that carries thematic weight by, slowly but surely, pushing Kirk’s denial of the no-win scenario toward a breaking point. This, gang, is how you make a movie.

This weekend: The Khan-tdown goes on! Tomorrow, find out what James Horner wished he could have kept out of his stellar score; and, on Sunday, enter the home stretch as we start showcasing the strongest performances in Star Trek II. What moment will take top honors? Find out on Monday, June 4–Opening Day, thirty years to the day!