In today’s installment of the Khan-tdown to the 30th anniversary of Star Trek II, we start with something old and end with something new, but also come full circle. We also do right by Hikaru Sulu along the way. As Kirk would say in a later Trek film, “Sounds like fun!”

(Catch up with the countdown here.)

One wall of Spock’s cabin aboard the Enterprise boasts a shimmering, multi-colored mosaic representation of a design with meanings both silly and significant in Trek lore: the IDIC symbol. In the third-season original series episode “Is There In Truth No Beauty?”—one of the show’s trippier installments but also one of my favorites—Gene Roddenberry established that the phrase “infinite diversity in infinite combinations” is a key axiom of Vulcan philosophy, illustrated by an amalgam of a circle and triangle. Spock wears a pendant featuring the design during the episode, ostensibly to honor a visiting scientist, Dr. Miranda Jones. (File that first name for later!)

Spock wore this bling, however, was to help Roddenberry’s mail-order merchandise business, Lincoln Enterprises, sell replicas of it to Trek fans. I don’t know how well the necklace sold, but the philosophical tenet it illustrates stuck around. It surfaces in iterations of the franchise from the animated series to the novels to the design of Spock’s ship’s cockpit in the 2009 Abrams film (that is a pretty neat touch). The IDIC symbol in Star Trek II is a welcome “callback” to the franchise’s past, the kind of homage Star Trek: The Motion Picture generally lacked. It also serves as a literal and metaphorical background for Kirk and Spock’s friendship, reminding viewers that the universe’s infinite and surprising diversity combines in a powerful way in these two men’s unique bond.

And consider this: from a certain point of view (quoth he, sounding for an instant like someone from that other Star franchise), the IDIC symbol looks like an angel, doesn’t it? The word “angel” literally means “messenger.” Perhaps, to sci-fi Christian eyes, the “IDIC angel” can remind us of the message written in the letter to the Ephesians: though God’s creation is, to our eyes, infinitely diverse and full of wonderful “things in heaven and things on earth,” God’s “plan for the fullness of time” is “to gather up all things” in Jesus Christ (Eph. 1.9, 10, NRSV).

Outside the context of the film, what is arguably its most famous line of dialogue could, like the Genesis Device, be perverted into a dreadful weapon. Only the strictest Utilitarians would argue that, at all times and under all circumstances, properly ethical action can be determined by calculating the maximum benefit for the maximum number of people. History offers numerous examples of the cruel and powerful invoking such logic as license to run roughshod over the rights of the poor and marginalized, not only in our own world but also in the world of Star Trek. Kodos the Executioner, for instance, justified his massacre of impoverished colonists by appealing to this kind of heartless mathematics. (In stark contrast, the Occupy Wall Street movement has apparently also found a use for the sentiment.)

Within the context of the film, however, we can clearly hear the principle as what Spock means it to be: a logically “acceptable” statement about the value of altruism. When an individual chooses to forgo her or his own good for the sake of others (as opposed to having that choice imposed), we can see that action as morally praiseworthy, even noble. The line also, of course, sets up not only Spock’s “solution” to the Kobayashi Maru scenario (also about which much more later this week) but also Star Trek III’s exploration of the inverse principle: sometimes, the needs and good of the one outweigh those of the many.

Spoken Klingon gets the targ‘s share of attention in fan circles, but give me spoken Vulcan any day! Spock and Saavik’s brief exchange in the torpedo bay isn’t the first time we’ve heard spoken Vulcan in the franchise—The Motion Picture lays claim to that honor (unless you want to count the smattering of words and phrases heard in “Amok Time”)—but it does offer us our first chance to eavesdrop on “conversational Vulcan.” Like the Vulcan (and, for that matter, the Klingon) heard in The Motion Picture, this language was created in post-production. Leonard Nimoy and Kirstie Alley dubbed new sounds over existing footage. On set, they had spoken English; if you watch their lips closely enough, you can tell. But the combination of exotic phonics and playful subtitles (“He’s so… human.” “Nobody’s perfect, Saavik.”) create an almost perfect illusion of alien dialogue.

From Star Trek III onward, professional linguist Marc Okrand would craft honest-to-Great Bird alien dialects for actors to deliver. Spoken Klingon, with syntax and structure to rival any tongue J.R.R. Tolkien ever dreamed up, has become something of a cottage industry. But it’s Vulcan and Vulcan alone we hear in Star Trek II, adding to the film’s verisimilitude. How do we know we’re in space, in the future? Because aliens are talking alien, that’s how!

Honestly, I think The Motion Picture uniforms get a bad rap. No, they’re not the most flattering or colorful suits imaginable. Yes, they do accentuate the male officers’ privates too much. But shirt-sleeve, “dressy casual” garb in a climate-controlled starship with artificial gravity makes sense. Look at what NASA astronauts and the crew of the International Space Station wear today: functional, non-flashy clothing that lets them work and move freely. 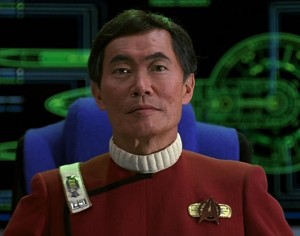 All the same, the uniforms of Star Trek II mark a major step forward in Starfleet’s fashion sense! They are more militaristic than the wardrobe of either the original series or the first film, but they complement the naval aesthetic developed by director Nicholas Meyer. More importantly, they look darn snappy. With only minor alterations, these uniforms remained Starfleet standard issue until at least the the mid-24th century, the time of the Enterprise-C. I don’t wear Star Trek costumes–well, okay, I wore one at Halloween a few years ago, only to look in the mirror and see with ego-crushing clarity why I never wear a Star Trek costume–but, if I did, I’d want one of these marvelous maroon numbers.

(Before you ask: yes, I know this image of Sulu is from Star Trek VI, not Star Trek II. The uniform is the same style. More importantly, Star Trek II was supposed to include a mention of Sulu’s promotion to the rank of captain. Vonda McIntyre’s novelization preserves a conversation in which Admiral Kirk congratulates Captain Sulu, and thanks him for serving as helm officer for this “little training cruise” before he assumes command of his own ship, the Excelsior. If you watch the corresponding scene in the film, you can see George Takei start to say something after he says, “Any chance to go aboard the Enterprise”—but the camera cuts away before he can get his next words out. I have always hoped that footage discussing Sulu’s new rank would emerge from the proverbial cutting room floor—but, alas, not yet. I include this image not only to set right one of the few wrongs in Star Trek II but also to honor George Takei. As I wrote in this forum last fall on the occasion of Trek’s 45th anniversary, he is truly a class act.) 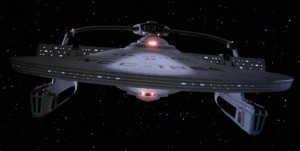 I didn’t realize this fact until a recent rewatch, but I believe it’s true: the ill-fated U.S.S. Reliant is the first example ever seen onscreen of a Federation starship that doesn’t belong to the “Constitution” class (i.e., that doesn’t look like the Enterprise). We saw some of the Enterprise’s sister ships in the original series, and The Motion Picture includes a cameo by a fairly dull long-range transport “sled.” With the Reliant, however, we see more of what Starfleet has to offer. On the one hand, it’s only a budget-conscious rearrangement of the Enterprise’s familiar structural elements—flip the warp nacelles and the primary hull, lose the secondary hull altogether, and presto!—but, on the other hand, it’s cleverly done, and even manages to look appropriately menacing, like a hunched buzzard swooping in for the kill, considering that, for the vast majority of the movie, it’s a ship under Khan’s command.

At some point, in some “non-canonical” source, ships that look like the Reliant were christened the “Miranda” class. Shakespeare coined the name “Miranda” for The Tempest. It means “admirable” or “wonderful” (from the Latin mirandus). (See? I told you to remember that name!) Fans of Star Trek: Deep Space Nine will note that the Saratoga, aboard which Benjamin Sisko served during the battle of Wolf 359, was a modified Miranda-class vessel. The model used in filming the episode was the Reliant model from Star Trek II, pressed into service once more, to meet a none-too-wonderful fate one more time. Some ships can just never catch a break!

Tomorrow: The Star Trek II-Buzz Lightyear connection, and much more!