A new take on Batman’s story points to the power of a greater one.

Even as Christopher Nolan’s version of the Dark Knight’s legend ends onscreen, another version takes wing on the comics page. The second entry in DC Comics’ series of Earth One original graphic novels, Geoff Johns and Gray Frank’s Batman presents a solid and entertaining retelling of the Caped Crusader’s origin, successfully (and wisely) taking cues from both Nolan’s “real world” approach and more colorful elements of the character’s past.

Johns keeps Batman’s origin story and much of Batman’s world familiar, at least in rough outline. Bruce Wayne is still the orphaned rich boy who first dons his fear-inspiring cowl and cape to avenge his parents’ murder. Gotham City is still crime-ridden and corrupt—all the more so because, in this telling, one Oswald Cobblepot is mayor. (Since you’re reading this blog, you probably recognize that name; on the off chance you don’t, trust me: you’ll recognize him when you see him.) Jim Gordon is a beleaguered police detective (not yet commissioner) with a bookish, redheaded daughter named Barbara, caught between his duty as a cop and his responsibility as a father. Lucius Fox is younger than we’ve seen him before, but he’s still the technical whiz behind Batman’s “wonderful toys” (Jack Nicholson’s memorable phrase—but no Joker, whether like Nicholson, Romero, or Ledger, appears). 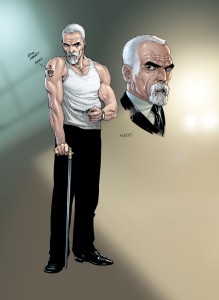 The most notable point of departure occurs when we meet Alfred. He’s still British, but now he’s an ex-Royal Marine with a prosthetic leg and a cane. Neither Michael Gough’s gentle manservant nor Michael Caine’s tender-hearted father-figure, this Alfred is tough and grizzled, scarred physically and emotionally by what he’s seen and done in battle. He saw combat with Thomas Wayne, and—unbeknownst to Alfred—Wayne named him Bruce’s legal guardian in the event of the unthinkable.

The book passes over most of Bruce’s childhood; as with Jesus in the gospels, we catch only a glimpse here and there, enough to get the sense that Alfred and his ward aren’t particularly close. We do know, however, that Alfred disapproves of Bruce’s vigilante quest for vengeance: “So this is your life now?…  The kind of people you’re hunting don’t get scared… I didn’t teach you how to fight so you could go on some insane crusade.” He also insists that, “to do this properly,” Bruce needs a gun. True to previous incarnations, Bruce refuses to use one—but the book’s falling action suggests not even Batman can escape the consequences of that decision.

The whole book, in fact, shows Batman failing as much as succeeding. Some of his victories are narrowly won. The first ten pages, for instance, masterfully upend readers’ expectations. Frank’s art reaches almost cinematic quality as it depicts, with virtually no dialogue, a hot pursuit gone wrong. The sight of Batman crashing to the ground into garbage cans is undeniably amusing (perhaps a split-second evocation of Adam West’s aura?); seeing Batman turn away from a just-robbed shop owner on the next page is positively heartbreaking. 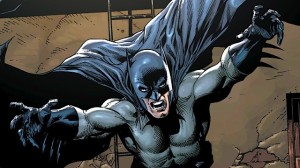 Of course, it’s no spoiler to tell you that Earth One: Batman is not, in the end, any radical deconstruction of the hero. It doesn’t show him struggle simply for the sake of reveling in revisionism—a temptation to which I feared the book might succumb. Although I’m not a die-hard Batman fan, I appreciate that his ability to prevail against great odds without superpowers (ostensibly—his wealth is his superpower; Alfred even acknowledges, early on, that the family fortune means Bruce will never know a normal life) is a large part of his appeal. I didn’t want a Batman story where the man beneath the mask is “only human.” Even if he can’t fly faster than a speeding bullet, Batman’s no average Joe. His exceptional skill, discipline, and dedication make him a hero who deserves the “super-” prefix.

Again, however, Earth One: Batman is just the beginning of this version of the legend. It acknowledges Bruce Wayne’s potential, but also questions how effective he can be on his own. One of the story’s prominent themes is the importance of helping and accepting help from others. This theme surfaces most clearly in Bruce and Alfred’s story, but also in Gordon’s relationships: with his unwanted new partner, Harvey Bullock (in this rendition, Bullock begins as a pretty boy cop who transfers to Gotham from a posh, televised Hollywood beat in order to take a PR-motivated crack at solving the Waynes’ murder); and with Barbara, who reminds him—as, in the wake of Mrs. Gordon’s death (I think Gordon as a single father is a new element; long-time Batfans, correct me if I am wrong), to make their rent and pay their utilities—“We’re in this together.” There’s even a gorgeous page with a tantalizing hint of a familiar Batman ally on the horizon. 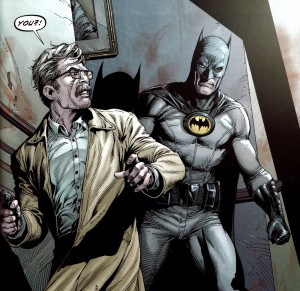 But the book also states Bruce will need a non-human ally in order to fulfill his quest. (No, not Superman.) In one of four splash pages at the conclusion, Alfred declares, “We need to build a legend.” The moment is clumsily handled, but the truth supporting it is sound. Batman is more than one crime-fighter. He is an idea and an ideal (as Batman Begins so beautifully argued). If you’re among that “superstitious and cowardly lot” he’s after, Batman is a persistent urban myth you can’t shake no matter how hard you try (as in the opening sequence of the 2008 animated DVD Batman: Gotham Knights). If you’re a law-abiding citizen, and even more so if you’re one of the people an affluent and powerful society oppresses, victimizes, and pushes to the margins, he is a nearly Arthurian myth of justice done, of might used in the service of right, of safety and salvation.

Quest for the Historical Batman?

Batman is a narrative that generates meaning. In Earth One: Batman, we see the strata of that narrative exposed; we get an examination of its foundations. As a result, the book, even after repeated readings, feels a bit shaky and rough. Familiar pieces are there–Arkham Asylum; Harvey Dent; even a prototype of the weird theme villains who populate Batman’s world–but, even discounting Johns’ “tweaks,” they don’t quite always hang together. But perhaps that’s by design. Perhaps we’re being invited to consider a “quest for the historical Batman.”

As with the historical quest for another salvific figure with whom Sci-Fi Christians are (hopefully) even better acquainted than Batman, it’s not the bare facts but the story in which they play their part that matters most.

Please don’t misunderstand me. Yes, Christianity is a religion that rests on particulars. “The Word became flesh and lived among us” (John 1.14)—in a particular time, in a particular place. As one of my denomination’s statements of faith reminds us, “Jesus, a Palestinian Jew, lived among his own people and shared their needs, temptations, joys, and sorrows” (The Confession of 1967, 9.08). As the Apostles’ Creed unashamedly affirms, he was “born of the Virgin Mary” and “suffered under Pontius Pilate.” Jesus of Nazareth left a historical footprint. No credible scholar holds he simply didn’t exist.

But it’s not the historical existence of Jesus that saves. And, while I do believe God raised Jesus from death hat first Easter morning, even if we could locate his tomb with one hundred percent certainty and prove, empirically and scientifically, that it was empty, and even if we could somehow prove that the cause was a miraculous overthrow of mortality, not even those historical facts would assure us of salvation.

The historical data about Jesus matter because, as Luke explained when writing his gospel, they are pieces that must be interpreted—or, perhaps more accurately, appropriated: the evangelist “decided, after investigating everything carefully from the very first, to write an orderly account for you… so that you may know the truth concerning the things about which you have been instructed” (Luke 1.3-4). If faith were merely a matter of proving facts, everyone would believe in Jesus as Lord and Savior. Instead, the facts have to be told in context, as elements of the story of God’s saving purpose. They are, to borrow Earth One: Batman’s terms, the building blocks of “legend.” And this “legend” that is more than legend, this myth—not in the sense of falsehood or fantasy, but in the sense of a narrative that gives and sustains meaning—is where we encounter the risen Jesus, the living Word, even today. That’s why, as the old hymn has it, we “love to tell the story”—or should! After all, as the apostle Paul asks the Romans, “How are they to call on one in whom they have not believed? And how are they to believe in one of whom they have never heard? And how are they to hear without someone to proclaim him?” (Rom. 10.14). We’ve got to tell the story, because—as with the story, the legend, of the Batman—the story can change the world.