I don’t know how long the Coming Attractions lasted at the theater where you saw The Dark Knight Rises, but at my cineplex, they seemed like they could’ve used a boost from the old TV Batmobile’s atomic batteries because, unlike that crazy-cool car’s turbine, they were definitely not up to speed! We were an audience growing restless as preview after preview (for what look like, frankly, a crop of really lousy flicks) rolled–someone a few rows back suggested we all start chanting, “Batman! Batman!”–but a palpable hush fell as the final trailer began.

The Howard Shore music initially made me think we were getting a Hobbit trailer (which would’ve thrilled the guy behind me, who kept muttering “Hobbit, Hobbit” each time a trailer started), but I soon realized we were getting glimpses of Superman’s upcoming return to the big screen (just in time for the character’s 75th birthday), Man of Steel.

The teaser trailers don’t reveal much (hence the name, I know). I’ll admit, most of the visuals, on their own, aren’t very exciting (with one stunning exception). We spend most of the minute-and-a-half moving back and forth between what looks like two commercials: one for the Gorton’s fisherman, the other for a laundry detergent. But we also see a sight I suspect most of us genre fans can appreciate: a little kid draping a red sheet over his shoulders and striking a heroic pose. I’m guessing this boy is a young Clark Kent, but it hardly matters, because that act of playful imagination and powerful wishing is bigger than the character who first inspired it. Even if you never celebrated that childhood ritual, I bet you wanted to (and maybe you still do).

And then… Great Caesar’s Ghost, then! 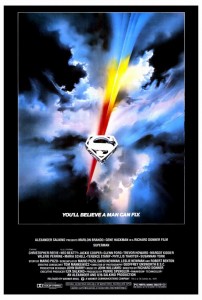 You may know that the teaser trailer for Superman: The Movie (1978) consisted of not much more than the cast’s name streaking through aerial footage of a bright, cloud-filled sky, followed up by the “S” shield logo. I thought it also included the film’s now-famous tagline–“You’ll Believe a Man Can Fly”–but apparently that promise remained on promotional one-sheets only. In concert, though, these elements of Warner Bros.’ publicity campaign worked to create tremendous excitement. In what I think is a deliberate homage to that campaign, the Man of Steel trailer, in its final few moments, not only makes that same promise but also makes good on it. There’s the bright, cloud-filled sky–but we get more than words streaking through it. We get (dare I say it? Yeah, I dare) those words made flesh (or at least an outstanding CGI rendition thereof) as Superman himself, decked out in the red and blue, flies–no, he doesn’t just fly; he rockets–into the stratosphere, breaking several sound barriers along the way and streaming contrails–contrails, I love it!–in his wake. Do I believe this man can fly? Heck, I’ll swear to it on a stack of Action Comics!

So: Did I enjoy this trailer?

Is kryptonite green? (And gold? And white? And red? And every other color of the visible spectrum?)

If this trailer is a true indication of the Superman awaiting us, I think fans of the character have little to fear, hand-wringing about a “darker” and “edgier” incarnation notwithstanding. Yes, there will be differences from screen versions past (I’ve never seen a bearded Clark Kent–will he have to bounce his heat-vision rays off a mirror to shave himself, as in some comics?); and, yes, I expect–considering the creative team of producer Nolan, screenwriter David Goyer, and director Zack Snyder–that the adventure in which our hero will be embroiled may feel more like a “Dark Knight” companion piece than a George Reeves episode or a Christopher Reeve outing. Man of Steel won’t be doing much obeisance to Richard Donner’s incomparable vision; as much as I once appreciated Bryan Singer for his 2006 Valentine to the 1978 movie, I now think he fumbled an opportunity to reinvigorate the character, even if he did so with his heart in the right place. But this trailer reassures and, thus, excites me that the superhero on the screen next year will still be Superman: the cape-draped innocent in us all, yearning to soar to great heights, and ultimately doing so with tremendous power and purpose.

The visual clues are there. So are the verbal ones. Here’s the version of the trailer I saw at my midnight screening:

That’s Russell Crowe’s Jor-El delivering a speech that evokes Marlon Brando’s soliloquy (so deftly employed in the Superman Returns teaser trailer: “They can be a great people, Kal-El, they wish to be; they only lack the light to show the way…”): “You will give the people an ideal to strive for. They will race behind you; they will stumble; they will fall. But in time, they will join you in the sun. In time, you will help them accomplish wonders.” Jor-El’s words to his son highlight Superman’s role as a moral exemplar.

I know this role is the very reason lots of comic book readers and superhero fans don’t like “the Big Blue Boy Scout.” He’s not only too powerful, they argue, but also too perfect. Even though I am a big Superman booster, I do have some sympathy with this complaint. No one enjoys being nagged about how they need to do better. As author and Presbyterian minister Frederick Buechner says, “When I have the feeling that someone is trying to set me a good example, I start edging toward the door” (Beuchner, “The End is Life,” in The Magnificent Defeat, 1966; Harper & Row, 1985, p. 79). But Beuchner says this in response to claims that Jesus is “the Great Exemplar of all time and no more.” Who needs a Jesus like that? Who wants a “moral” Jesus, whose only concern is to get us to be nice and play fair and eat our vegetables? Jesus is not so much concerned with “morality” as he is with saving us from sin and from ourselves so that we can soar into the life for which God first created us. People who know only a moralistic, “Miss Manners” Jesus need to meet instead the Jesus who said, “I came that they might have life, and have it abundantly” (John 10.10), and who promised his followers that “the one who believes in me will also do the works that I do and, in fact, will do greater works than these” (John 14.12).

Meeting Jesus is, of course, far more important than “meeting” Superman! Even so, anyone who knows Superman only as Super-Citizen, admonishing devotees to exercise and respect their parents, might enjoy discovering that his greatest power is the ability to inspire us to become more than we are. (Not that different from Batman after all, is he? Doesn’t Bruce Wayne tell Detective Blake, in The Dark Knight Rises, “I wanted to show people that everyone can be a hero”?) Jor-El’s words in this teaser trailer point to Superman as one who has come–who has been sent from his father–in order that we might have a life abundant with marvels.

What I didn’t know as I watched that trailer, however, is that another version of the trailer has been attached to The Dark Knight Rises. This version features most of the same footage as the first, but the voice-over comes from Kevin Costner, playing Pa Kent:

Pa tells Clark, “You’re not just anyone. One day, you’re gonna have to make a choice. You have to decide what kind of man you want to grow up to be. Whoever that man is, good character or bad, is gonna change the world.” His words point to another reason for Superman’s enduring popularity. As Mark Waid explains (in Larry Tye’s outstanding new cultural history of the character, Superman [Random House, 2012], “The whole point [of Superman] is that if you have all the power in the world, what do you do with it?” (p. 229). Superman does good. As the unfairly maligned World of New Krypton story in the comic books demonstrated (2009), what sets him apart from other super-powered beings is not his abilities “far beyond those of mortal men” in and of themselves, but that he uses them in the service of others, and in the service of the world’s welfare.

Pa Kent’s words in this trailer make me think of how Jesus, as a young man, must have wrestled with whether he would use his remarkable powers to become a good man–or, more accurately, whether he would use his powers in the service of God’s will. Scripture tells us he faced temptations to do otherwise (e.g., Matt. 4:1-11; John 12.27-28; Heb. 4.15). Jesus’ choice goes so far as to challenge conventional notions of power, because the mightiest act of his earthly ministry was serving and loving those God had given him to the utmost (John 13.1), remaining faithful to them and to his Father’s will “to the point of death–even death on a cross” (Phil. 2.8). And so we have seen that “God’s weakness is stronger than human strength” (1 Cor. 1.25), for God’s weakness saves and changes the world. (Father Sean Mullen of Saint Mark’s Episcopal Church in Philadelphia, Pennsylvania recently preached an excellent sermon, “Superhero Faith,” making this point, and I commend it to you. He is well-versed in not only the Bible but also the lores of Spider-Man and Batman, as you will hear when you listen!)

Now, was I thinking such Scriptural, spiritual thoughts as the Man of Steel trailer rolled? Of course not. I’m a geek. I believe my exact reaction in the moment was, “Awesome!” That trailer even made the first few moments of The Dark Knight Rises itself seem… anti-climactic. (Before you throw brickbats–or Bat-bricks–at me, rest assured, I quickly and happily fell under Christopher Nolan’s spell once more.)

But I am glad to know now of the trailer’s two versions–these talks from two fathers. They give me hope that Man of Steel will have some emotional and philosophical depth, consistent with the best of Superman’s past exploits. They also present a fascinating comparison and contrast of Superman’s “heavenly” origin and mission on the one hand, and his “human” struggle to realize his identity on the other. How well he integrates these two aspects of his nature in Man of Steel remains to be seen; but I’ve no doubt the movie will prove a parable of our true hero, the One from above who lived and died as one of us, and who was raised from death for us, so that we might be raised with him to new life–not only in the future, but beginning here and now.