The Shaming happens like this: You’re not bothering anyone; you’re just sitting there, watching a mediocre, or even outright bad episode of your show because, hey, it’s still Your Show, and you’re loyal to it, and Your Show at its worst is still light-years better than most people’s shows at their best; when who should walk into the room but that friend or family member you’ve been pleading with to give Your Show a try? And, as you cringe with dread, this potential “convert ” you’ve been working on actually sits down and pays attention to Your Show—and then looks at you with a blend of pity and scorn and says, “You actually like this stuff?” And you really have no defense because, let’s face it, with this episode, Your Show has let you down, and it’d be foolish to pretend otherwise.

When I was a youth, The Shaming hit me not once but twice with Star Trek. My mom was the one who caught me watching the less-than-stellar episode each time. The first time, a late-night repeat of “The Omega Glory” from the original series (a.k.a. The One Where Kirk Reads the Preamble to the U.S. Constitution) was the culprit.

My second Shaming came courtesy of “Hide and Q.” 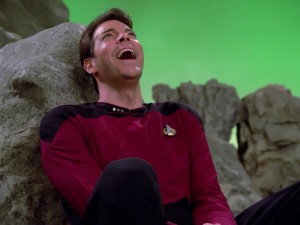 In 1987, when I was still enraptured with the mere existence of new weekly Trek, I thought this episode was top-notch. Like so many of the original series’ best hours, it was a futuristic morality play. It had some nice character moments, and, hey, Q was back, so bonus points for continuity. Having dutifully videotaped the thing, I was watching it for the sixth or so time that week (no joke, I pored over that first season the way I should be poring over the Bible) when Mom wandered in and sat down. Aha! I thought. Another chance! She’ll forget all that “E pleb nista” junk when she sees Star Trek at its finest! But after a minute or so, Mom said, “I don’t know. It’s an awful lot of talking.” And she left the room.

Well, Mom was right (no great surprise there). “Hide and Q” is an awful lot of talking. And I know now that the ideas the characters spend so much time talking about have been handled far more elegantly, not just in Star Trek but in the vast genre of science fiction outside the franchise, of which I was mostly ignorant at the time

Even so, some of the episode’s talking entertains me even today:

As you see, most of it reflects Gene Roddenberry’s relentlessly optimistic view of human progress and potential, the element of Star Trek that has always given me, as a Christian, the most pause. It’s not that I think we human beings shouldn’t do good things, or that we can’t grow as a species. It’s just that we don’t really ever seem to learn, not in the ways that matter most; a casual scan of any given day’s headlines provides ample evidence of this truth. We are a fallen race. G.K. Chesterton held that the doctrine of original sin—the teaching that, as the Heidelberg Catechism has it, the “disobedience of our first parents… has so poisoned our nature that we are born sinners—corrupt from conception on” (A. 7)—is “the only part of Christian theology which can really be proved.”

So while I ultimately can’t endorse Riker or Picard’s complete confidence in humanity’s inevitable progress toward perfection (although I do love listening to Sir Patrick recite that soliloquy!), I can appreciate this episode’s portrayal of temptation. True to its talky self, “Hi

de and Q” mostly tells rather than shows the threat to Riker’s humanity (dare we say to his soul?) that Q’s power represents; about the darkest deed he does is to presumptuously call Picard “Jean-Luc.” Still, the episode’s theme tracks the story of “our first parents,” Adam and Eve, pretty closely. That crafty critter the snake (later interpreted as Satan) tells the first woman that she can eat the forbidden fruit with good cheer, for “you will be like God…” (Gen. 3.5). The fruit on that tree seemed “good for food, and… a delight to the eyes, and… to be desired to make one wise” (3.6)—it appeared beneficial, and beautiful, and valuable. But the snake’s “gift” gave only death, as surely as Riker would have “died” to humanity had he chosen to join the Q Continuum. (I don’t think it’s just a throwaway special effect that, in the episode’s teaser, Q first shows up as an “Aldebaran serpent!”)

I once heard a professor or preacher quip that, classic doctrinal terminology aside, “When it comes to sin, there’s nothing original anymore!” His serious point, if breezily made, was that Eve and Adam’s sin in Eden is the paradigm for all sin. All sin, at some level, involves the confusion of creature and Creator, the misguided effort of human beings to become like God. Certainly, this is what Riker tries to do (egged on by Q, now cloaked in a medieval monastic cowl and pectoral cross—simple costume, or something more?) in the episode’s last act. I would call it the “dramatic” last act, except that, again, there’s so much talking! So we’ll settle for “climactic,” which is at least structurally accurate. You can watch it here (I know the video says “FULL,” but I’ve cued it to the last ten minutes or so):

Q the tempter suggests and Riker the tempted seizes upon the idea that godlike power is the power to do or cause absolutely anything, with nothing more than a thought and a wave of the hand. Isn’t that the very definition of “omnipotence,” after all, God’s classical attribute of being all-powerful? And what could be more godly than the giving of gifts to friends? After all, is it not written that the one who descended and ascended, the Lord Jesus himself, “gave gifts to his people” (Eph. 4.8)?

But the crucified and risen Jesus gave (and gives) gifts “for the building up of the body of Christ” (4.12). Jesus’ gifts are not like Riker’s: individual wish-fulfillments like Wesley’s instant (and, sorry, none too handsome) adulthood, Geordi’s biological eyes, or Worf’s… um… “date.” Jesus’ gifts are not given to gratify us as individuals; they are precious resources for us to share with God’s people—and, indeed, with the whole world that God loves.

Q tempts Riker into believing that being godlike is no different than being Santa Claus. Jesus, in contrast, reveals that true divinity is not doing and giving anything and everything, but in giving oneself, as God gave himself in the life and death of his Son. “Give” is probably too weak a word; Paul’s letter to the early Christians in Philippi talks of Christ emptying himself, pouring himself out in obedience to God’s will for fallen humanity “to the point of death—even death on a cross” (Phil. 2.8). It’s not cleanliness that’s next to godliness: it’s self-giving, self-sacrificial humility for the genuine good of others.

Ironically, there is one point in this episode at which Riker really acts like the God we know in Jesus Christ—or at least comes very close. When Data and Dr. Crusher ask him if he can bring the young earthquake victim back to life, Riker briefly wrestles with the possibility, then says, “I can’t. I’m prevented from that by a promise.” The point of similarity is not in failing to restore the girl to life; it is in putting his promise to Picard (that he would not use the power of the Q, no matter how tempting) above the miracle Riker could perform, no matter how good it might be. God—the true God, the God of Israel, the God and Father of our Lord Jesus Christ—is a God who makes and keeps promises… a God who makes and keeps covenants, even when we break them… a God who does not break his word. And in Jesus Christ, God’s Word made flesh, God has promised and made covenant and vowed to be God for us.

And, in this sense, God is limited. God can’t do just anything and everything, whimsically, capriciously. God can and will do only what God chooses to do in order to save us—to lift us from our fallen state, to restore the image of God in which we were created, to bring us back into that life of loving fellowship with him for which we were made. God has chosen, from before the foundation of the world, to limit himself in this way for us and for our salvation. And this is good news! We do not need to worry that God will, in the end, turn out to be someone other than whom we meet in Jesus, “who died, yes, who was raised, who is at the right hand of God, who indeed intercedes for us” (Rom. 8.34). This is our God: the God who prevents himself, by a promise to himself and to us, from being anyone and anything other than who and what he will be to save us: from sin, from evil, from death…

…and even from all Shaming. The quality of Your Show will ebb and flow, but the promise–the Word–of our God will stand forever (Isa. 40.8). And if there is someone you want to pay attention to God’s promise to be God for us… well, there is always “a good episode on” as an introduction!

Next Week: One more from Season 1! Get ready to shed a tear for Tasha Yar as we ponder “Skin of Evil.”