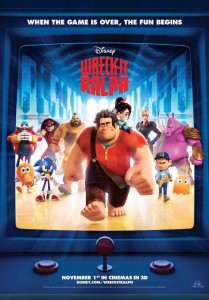 As you can pick up from the trailers, Wreck-It-Ralph is a very traditional Disney story of belonging and identity.  Ralph, voiced by John C. Reilly, is a video game villain and after 30 years finds himself struggling with the fact that he is not “nice” and is generally an outsider even in his own game.  He is constantly overshadowed by the hero and namesake of his game Fix-It-Felix Jr., a hero loved by the citizens of his game the Nicelanders.  Ralph goes on a quest to prove himself, a quest which requires that he leave his game.  On this journey of discovery he meets characters from other games including want to be racer Vanellope von Schweetz and Sergeant Calhoun the tough squad leader from a first person shooter game.  Will Ralph find his identity or will his actions cause mortal harm to the inhabitants of one or more of the games in the arcade?

Here are my thoughts on this great movie, other than the fact that I love it:

·  A man of character:  In many ways Tron, which I dislike, and Wreck-It-Ralph share the same basic concept with “programs” playing out their lives inside computers.  But the important difference for me is that Wreck-It-Ralph very quickly establishes characters that I care for and understand.  Many have seen segments of the villain group therapy sessions in the trailers.  Yes, this scene is funny.  But in the trailer you see only parts of the segment, one that effectively and quickly makes us understand Ralph’s problem, Ralph’s character, and Ralph’s pain.  I really credit the writers by helping us understand and come to care for Ralph at this quick pace, it becomes easy for the audience to enter into the story and cheer for Ralph in his struggles.  We care about the story because we care about Ralph!

·  Retro:  Let us be honest.  A big reason a lot of adults will be seeing Wreck-It-Ralph is the cameos of video game characters we grew up on.  There are a ton of cameos, though not everyone you may hope for.  I am not going to even pretend to be able to provide an exhaustive list of cameos, there are just too many.  But if you are coming through the door for the retro experience, be warned this movie almost entirely takes place in three environments created for the movie; Fix-It-Felix Jr., Hero’s Duty, and Sugar Rush.  And honestly, I am okay with it.  Since the animators and writers were not chained to the expectations the audience has about their favorite childhood video games they can focus instead on character, story and having fun with their backgrounds and scenery without angering fan boys.  And they do play; watch for the stylized movements of the Nicelanders.  So be warned, you will not be viewing a movie that is in Frogger or Super Mario Brothers.  But I believe using fictional video games was a better choice.

·  I want to go there!:  Let me admit I am not a serious gamer, despite my attempts at casual game reviews from the Disney fan perspective.  I have played a iOS version of Fix-It-Felix Jr.  It passed some time, but honestly it is repetitive and I lost interest in a few days.  I would probably never play Hero’s Duty on a consistent basis.  I do not think I would be good at it.  For me the original game found in Wreck-It-Ralph that I want to play is Sugar Rush.  This racing game seems super fun with bonuses that are candy and ice cream.  I want to play this game so bad.  One can play on the Wreck-It-Ralph website.  But I want to play it on a device so I do not have to be chained to a computer.  I would not think it would be that hard to adapt games like MarioKart for this purpose.  Please someone put Sugar Rush on a game console or mobile device!

·  Cartoon Violence:  Parents beware, there is some violence in this offering.  This violence is typically character fist fights.  However, some of these confrontations seem really severe.  I was taken aback by this, but as I thought about it the fights are really no more violent than the climatic fight at the end of Lion King.  However, the key difference is in Wreck-it-Ralph, the characters in these fights are human looking, where in Lion King we can explain the violence off as a part of the circle of life.  This is also a heavy story that may be too much for young viewers.  Death is a topic discussed in depth, well the video game version of death.  There are action violence sequences especially in Hero’s Duty that will remind you of action movies.  And there is one act of violence, yes I use a strong word for this, that got the intended desire of an emotional reaction from me.  Yes, Wreck-it-Ralph made my eyes sweat!

Along with violence there is a lot of bathroom humor.  It is humorous bathroom humor, but it is potty talk.  If you have a kid that is copier and tends to model bad behavior, you might want to pass for a few years.

·  Pixarization: With Pixar and Disney Animation operating separately it is easy to compare the two units.  Both have their successes, but today many who view the two production units would not be afraid to state that Pixar is currently in the lead.  In many ways Wreck-it-Ralph is an outcome of this unofficial competition.  The story is good, Pixar good.  It uses computer generated animation, the style that Pixar for all intents and purposes invented.  This film is so very very far from the look of Cinderella and The Little Mermaid and looks stylistically more like a Toy Story (honestly the story somewhat mimics replacing toys with video games).  One of the reasons that Pixar has had so many story homeruns is the use of the Pixar Brain Trust, some of Pixar’s best and most experienced minds.  If you watch the credits carefully you will notice that the Brain Trust was consulted.  But so was a Disney Story Trust, which I assume is Disney Animation’s response to this highly successful consultative tool.  Yes, Disney Animation is learning from its sibling Pixar.  And we are benefiting as an audience for this mimicing.

·  Who Knew, Ralph Did!:  Listen carefully, because I heard a Darth Vader breathing homage.  And to think Wreck-it-Ralph was released the same week that Disney purchased Lucasfilm!  If you look closely you may find another shout out to Disney’s newest business unit.

·  End Cards:  The end credits are really fun.  So sit down for a bit when the movie ends.  The credits include the characters in a number of situations, including funny ones.  Additionally the music played over the credits include theme songs for the games found within the movie, and these got a few giggles out of me.  In fact, I like it enough the Between Wife purchased me the soundtrack.  There is a post credit scene, which those of us familiar with the Avengers Initiative are familiar with.  However, this scene is only seconds long, cannot really be called a scene, and really adds nothing to your experience.

Okay, I have already spilled the beans.  I love Wreck-It-Ralph and I think it will appeal to both male and female, young and old viewers.  I have kind of forgotten about Brave.  And while I raved about the animation in Brave, I always knew I was watching a cartoon.  In Wreck-It-Ralph I forgot I was watching a cartoon as the production team had me focused on the story not on the animation.  Come for the nostalgia, but stay for the story.