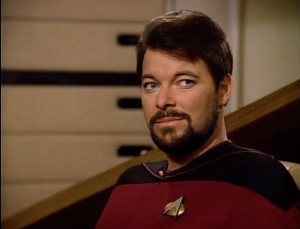 Like several of Star Trek’s most memorable episode titles, “The Icarus Factor” derives from classical mythology. You probably remember the story of Icarus. His father, Daedalus, designed and constructed labyrinth for King Minos of Crete, a maze-like prison in which to trap the fearsome Minotaur. Daedalus built the labyrinth so well, alas, he failed to leave himself and his son and exit. Undaunted, Daedalus crafted pairs of wings with which he and Icarus could fly themselves up and over the labyrinth’s high walls. The plan worked well until Icarus, proud of his newfound power of flight, ignored his father’s warnings and flew to close to the Sun. The Sun’s heat melted the wax in Icarus’ wings, sending him spiraling into the ocean to drown.

The myth is usually understood as a cautionary tale, the moral of which can be summed up as, “Pride goeth before destruction, and an haughty spirit before a fall” (Proverbs 16.12, KJV). The phrase “Icarus factor” has, in fact, entered the lingo of modern business culture, describing “a situation where managers or executives initiate an overly ambitious project which then fails. Fueled by excitement for the project, the executives are unable to rein in their misguided enthusiasm before it is too late to avoid the failure” (http://www.investopedia.com/terms/i/icarus-factor.asp#axzz2BfRAjC1A).

Given that the son at the center of the TNG episode of the same is Commander Riker, viewers could be forgiven for thinking it might highlight some hubris in the Enterprise’s first officer, who has been offered command of a starship, the Aries. “There’s nothing like holding the reins,” Picard tells Riker. Surely, the choice to accept or decline one’s first command might court feelings of pride. Will the Aries’ center seat, we may wonder, prove an “overly ambitious” height to which Riker should not dare soar?

Well, no. In the end, Riker’s choice to remain aboard the 1701-D (you didn’t need a spoiler warning, I trust) generates surprisingly little drama. There’s the requisite tearful embrace between Riker and his imazdi Troi, as well as a seemingly pointless—and, considering it lasts less than a minute, surprisingly interminable—conversation about how Commander Flaherty, the Aries’ first officer, is fluent in some forty alien languages (but not bocce; linguistically adroit he may be, but Flaherty’s no C3PO).

Pride of a different sort does rear its head, however, when the episode focuses on the strained relationship between Riker and his charismatic but long-absent father Kyle (guest star Mitchell Ryan, a veteran character actor whom genre fans might also know from his work in the spooky soap opera Dark Shadows, and who voiced Highfather in the Justice League cartoon). The two men haven’t seen each other in fifteen years, both still smarting from the wall of emotional pain that they unwittingly built up between them following the death of Riker’s mother when Riker was “barely out of diapers.” Kyle has come “with [his] hand open,” telling his ex-flame Dr. Pulaski (a rare foray into her backstory), he wants to “bury the hatchet” with Will, “but the ground is frozen.” Riker consistently keeps his father at arm’s length, content to point out to Pulaski the speck of his father’s ego while overlooking the plank that is his own. Of course, Kyle is no less proud. Troi calls him on his “false modesty,” and he does move through much of the hour with an air of self-righteous indignation when Riker rebuffs him. “Spare me the pain of your childhood,” he snaps at one point. “I hung in there for thirteen years; if that wasn’t enough, that’s too bad.” 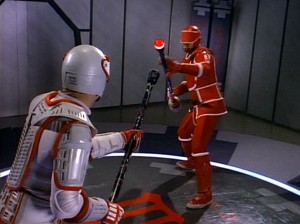 Were it not for a futuristic martial arts match in the last act (in which both Rikers look like rejects from a 24th-century community theater production of Man of La Mancha), the two might never reach any reconciliation. The reconciliation they do reach is rushed. It isn’t convincingly scripted or acted. But it does have one moment in its favor: “I should have tried to explain all of this long ago,” Kyle Riker tells Will, “but it hurt too much… I can talk to a roomful of admirals about anything in the galaxy, but I can’t talk to you about how I feel.”

Perhaps the script’s earlier, brief but noticeable preoccupation with the unseen Commander Flaherty was no misstep, but a subtle clue to a central thematic concern: communication. It isn’t always easy—we can’t all be Flaherty—but it’s always important, and its difficulty is no excuse not to try.

Scripture repeats, several times, God’s commandment for children to honor their parents. It’s this quotation of that command which most grabs my attention: “Children, obey your parents in the Lord, for this is right. ‘Honor your father and mother’—this is the first commandment with a promise: ‘so that it may go well with you and you may live long on the earth.’ And, fathers, do not provoke your children to anger, but bring them up in the discipline and instruction of the Lord” (Eph. 6.1-4). The apostle indicates that while the relationship between parent and child is not one of mutual equality, it is also not one in which a father (or a mother, for that matter) is free to treat a child with utter disregard. Indeed, it’s unlikely in the extreme that a parent can successfully raise his or her children “in the discipline and instruction of the Lord” without attending to and honoring their feelings, as well as communicating, in appropriate ways, his or her own. Such communication can feel risky; it can, in fact, be risky. But it’s the only way real relationships form and grow. 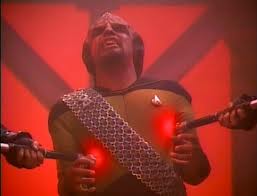 A concern for the courage required in real communication of feelings helps this episode—which, with its juggling of several shipbound plotlines, almost feels more like an installment of The Love Boat than Star Trek—together. When Data explains, during the Age of Ascension anniversary ritual that Worf’s friends prepare for him on the holodeck, “The true test of Klingon strength is to admit one’s most profound feelings while under extreme duress,” I initially laughed. Really? Klingons would go for something that touchy-feely, even if the touching was done with red-hot painstiks? But after some thought, I realized the Klingons might be on to something. Communicating our “most profound feelings” within our relationships, to our children or to anyone else, does require true strength, and real risk. As criteria of honor and integrity go, it might not be such a bad one. After all, it’s how God showed true strength when communicating his love to us: taking the real risk of speaking the incarnate Word, who suffered to the point even of death on a cross.

3 comments on “The Great TNG@25 Theology Trek: “The Icarus Factor””