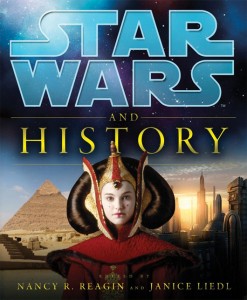 Often the best stories, are real stories.  And George Lucas has always been clear that human history has provided him inspiration for the events that have occurred in his Star Wars galaxy.  Editors Nancy R. Reagin and Janice Liedl have worked with other historians to create a collection of essays that demonstrate the intentional and unintentional linkages between Lucas’s galaxy and real life events in Star Wars and History.  The text is divided into three parts; War, Politics and Economics.  The authors in the 11 articles weave in and out of the history of our world with the world of Star Wars, including comparative pictures throughout the narratives.  Topics of individual essays include rebellion, warrior-monks, dictators, women in politics, and cities in history.  Additionally, color summary pages can be found in the text that highlights key points of the essays.

I found this book highly interesting as a concept, being both a former history major and a Star Wars fans.  For me the concept was chocolate and peanut butter combined, but I worried would the finished product be a delicious peanut butter cup!  Many a history book I have read in my time has been dry and lifeless.  This book however, being Star Wars focused, will clearly have a wider audience than academics and I worried that the text would be inaccessible to Star Wars fans who knew little about history.  Instead I found that the contributors did a fine job writing a text that has life to it.  In fact I found some essays hard to put down.  I think that this is largely due to the contributors’ love of Star Wars which helps them illuminate their topics.  The authors have serious Star Wars credibility along with their academic credentials.  I was impressed that the authors not only discussed the theatrical releases but the Expanded Universe and Star Wars: The Clone Wars.  And the pictures from both factual events and fictional ones add to the text, helping to support the authors’ points visually.

Due to my own past research the war essays were of the most interest to me.  Having taught Mao Tse Tung’s People War in the past, I found William J. Astore’s article “Why Rebels Triumph” highly enlightening.  He does an excellent job of demonstrating the three phrases of revolutionary warfare and how they play out in the rebellion against The Empire.  A lifetime ago the comparisons he presents would have been stolen by me in my own teaching and improved my presentation on this topic.  Additionally, I found Terrance Macmullan’s essay “Elegant Weapons for Civilized Ages” presenting his comparisons between Jedi Knights and Shaolin Monks, Samurai and Knights Templar both enlightening and entertaining.  One of my criticisms of the text would be that lack of discussion of spirituality and the force.  But Macmullan’s essay does provide clear comparisons especially between the spiritual beliefs of the Buddhist Shaolin Monks in the binding energy of quiz and Jedi beliefs of the Force, which also binds all things.  Tony Keen’s “I, Sidous” provides clear examples of how Star Wars and especially the Emperor Palpatine were inspired by modern dictators like Adolph Hitler and his Nazi Germany.  And Paul Finkleman’s “From Slavery to Freedom in a Galaxy Far Far Away” traces the history of n topic that is a blight of our own history and the fictional history of Star Wars, slavery.  It has disturbed me both in the prequel movies and the Expanded Universe to the general blindness the Jedi have to this dehumanizing institution.  Finkleman shows how we have as the human race have largely ignored the issue just as the Jedi do.

Who will find this book useful?  First, Star Wars and history fans will separately find the book interesting.  Star Wars fans will enjoy reading about the history and inspirations of their franchise.  History fans will enjoy seeing historical events and how they play out in popular culture.  Another use for this book in my opinion is for readers who struggle with enjoying and understanding history.  The use of Star Wars examples will likely help these readers connect to the content and remember the key concepts.  Back in my teaching days I would likely have never assigned Star Wars and History in the undergraduate courses that I taught due to my need for a very general texts.  But there is a strong chance that I would have recommended the text to some students looking to find out more in an interesting way.  Though I would admit it would be very fun to use Star Wars and History as a key textbook in a topics course on Star Wars.

For me Star Wars and History succeeds both as a history book and a Star Wars book.  The connections between human history and the galaxy far far away are clear and the contributors do an excellent job expanding on connections fans were already aware of and introducing new parallels.  Star Wars, Disney, sci-fi and history fans will all likely enjoy this text, and learn a little history on the journey.

One comment on “Between Books – Star Wars and History”