From 1977 until 1986 for 107 issues that may have saved the company, Marvel Comics published Star Wars.  But after that date they gave up the title and focused on super hero titles. 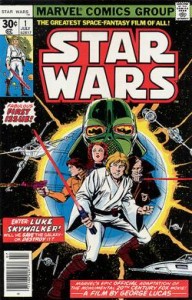 In 1991, a young comic book company called Dark Horse Comics published its first Star Wars title and continues licensing from LucasFilm today.  With the Disney announcement of their planned purchase of LucasFilm many jumped to the conclusion that Marvel would regain its lost title.

Dark Horse and LucasFilm have a strong partnership which spans over 20 years, and has produced multiple characters and story lines which are now part of the Star Wars lore.  Star Wars’ will be with us for the near future. Obviously, this deal changes the landscape, so we’ll all have to see what it means for the future.

And Dark Horse Comics is preparing to launch a new series simply titled Star Wars in January set between Star Wars Episode IV: A New Hope and Star Wars Episode V: The Empire Strike Back featured the beloved original trilogy cast.  And they are still receiving positive feedback on Star Wars: Agent of the Empire.  Their comic stewardship of the property seems to be going in the right direction.

Then the Disney blog Blue Sky Disney announced this would all soon change!  They posted

The Suits in the know have determined that no new contracts will be given to Dark Horse after the current ones expire. So all new projects after 2013 will be handled internally by Marvel.

It’s not known yet if titles will be worked into the regular line up, or will Marvel create a special branch of the company that deals with Star Wars. It’ll take a couple of years for the old deals to work there course, but the stories that Dark Horse have coming down the pipeline will be the last. And you can expect anything new from Marvel dealing with Star Wars to arrive around 2015.

And many news outlets have posted this rumor, alongside the rumors that every possible director may be directing Episode VII.  Can we start our own rumor that Matthew Anderson will be directing the next installment?

So what do I think of this?

First, I think it is likely that someday Marvel will regain Star Wars.  Boom Studios published Disney titles until Disney purchased Marvel.  Then they shifted their titles to their new publishing house.  I do believe here that LucasFilm will get to weigh in on this issue and they have had a strong relationship with Dark Horse Comics, which could see the transition happening later than sooner.

Second, I am cynical about the Disney fan community.  A few months ago the rumor was Avatarland was canceled based solely on the fact no one had seen concept art.  Disney responded by showing pictures of prominent Imagineers with James Cameron working on the project.  I just want to warn against rushing to conclusions.  As a member of that fan community let me assure you there are plenty of rumors that have been floating around, especially about Star Wars.  Rumors are not always fact and sources do not always know. I will believe it when Disney, LucasFilm or Marvel say it is so.  Let us remember the Disney purchase had no warning!

What is your take on this rumor?

4 comments on “Rumor Alert: Star Wars to Return to Marvel”