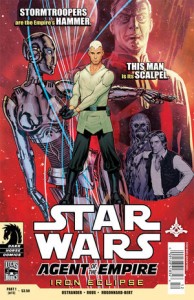 I had heard good things about this relatively new Dark Horse Star Wars title.  I heard it had action and an edge that would appeal to adult readers.  So I picked up a copy of the collected trade of the first issues Star Wars: Agent of the Empire, Volume One Iron Eclipse.  The story follows Imperial intelligence agent, Jahan Cross, three years before the Battle of Yavin (Star Wars: Episode IV A New Hope).  In Iron Eclipse, Cross follows a trail of imperial corruption into the Corporate Sector chasing the money to a potential threat to the Empire.  Along the way, he is assisted by two smugglers named Han Solo and Chewbacca, who proved to be resourceful allies willing to accept Imperial credits.  Cross’s chase is full of intrigue, deception and romance as he attempts to preserve the Empire and maybe the entire Galaxy from the threat at the end of the trail.

Author John Ostrander introduces his reader to a new character in Cross that is highly familiar.  In short, Cross is James Bond.  This is made clear by his briefing with his version of M, his outfitting with an Imperial version of Q (complete with dialogue that could be found in a Bond movie) and Cross’ ability to win the hearts of the ladies he interacts with.  The story shows he is clearly a resourceful agent.  And though he is a spy, he is also clearly a man of honor with a complicated past.  It is that past which makes him a true loyalist to the Empire in the same way Bond is loyal to the crown.  Cross is basically a reflection of an archetype character dropped into a familiar galaxy.  For those who enjoy James Bond or Jason Bourne, Cross is likely an intriguing character. 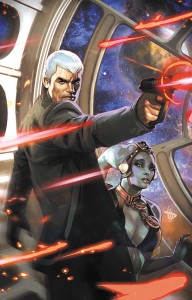 Another aspect of Cross I find interesting is his choice of a non-Force user as a main character.  The word Jedi is only spoken of, but an actual Jedi never makes the pages of the comic.  I think this is important because it does help to show how big George Lucas’ universe is.  There is plenty of room in the Star Wars galaxy for stories that do not require the Skywalker family or the Force.  The use of familiar uniforms and settings provide reassurance that you understand the galaxy you are exploring with Cross, but they do not limit you to the direction of the story.

If I had one thing I would change, it would be the use of Han Solo.  It is interesting to see Solo in a support role to Cross.  Solo is Cross’ Felix.  The story is faithful to Solo’s and Chewbacca’s, characters, but having Solo in a frame almost took away from Cross as the central character.  You ask yourself; shouldn’t Han be the main focus here?  Also, since the image of Solo is an artist’s interpretation I took time to assess the art against the actual model.  As Flynn Rider might say, “They just can’t get my nose right.”  So despite the fine effort, I found myself distracted by Solo.

I remain optimistic about the Disney purchase of LucasFilm because of opportunities which can be found in stories such as Star Wars: Agent of the Empire.  Ostrander proves you do not need a Jedi, lightsabers, TIE Fighters, or Sith Lords to present an interesting and engaging Star Wars story.  I hope this fact is evident to the Disney executives as they evaluate the newest addition to their portfolio.

One comment on “Star Wars: Agent of the Empire”