“The people I create in there are more real to me than the people out here.” So Reginald Barclay confesses to Geordi midway through “Hollow Pursuits.” Barclay—Starfleet’s very own Walter Mitty, played to awkwardly painful perfection by Dwight Schultz—is referring to the virtual duplicates of the Enterprise crew he’s created within the holodeck. But he’s also referring, even if he doesn’t know it, to those holocharacters’ templates: the imaginary people he’s created within his mind. 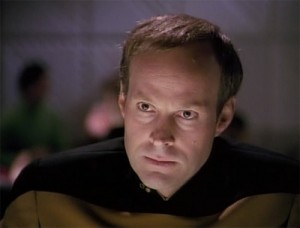 Unlike the gone-and-forgotten Ensign Sonya Gomez, Lieutenant Broccoli Barclay quickly became a successfully established recurring member of the Engineering team, as well as a true fan favorite. It’s not hard to understand why. No, not because he is obviously, to some degree, an onscreen incarnation of the stereotypical Star Trek fan, the kind of fan William Shatner implored to “get a life” in his 1986 Saturday Night Live hosting gig. Barclay is, in some ways, like Trekkies I have known, let alone the Trekkie I have been (and sometimes still am): introverted, leery of large social situations, perfectly happy to hang out in my own head. But Barclay is written and portrayed so sympathetically, I can’t believe the character was ever intended as just a jab at sci-fi geeks.

But Who Are the Really Self-Absorbed Folk in This Episode?

Everyone, fan or “mundane,” likes to create people in their minds who can become, if we’re not careful, more real to us than real ones. Barclay’s mental revisions of his crewmates—the Little Lord Fauntleroy-esque Wesley; the diminutive “Number One;” “the Goddess of Empathy” herself, Counselor Troi—are hysterically funny, but they’re also unflinchingly accurate examples of how we can fall prey to swapping our actual family members, friends, neighbors, coworkers—anyone—with fictional versions who correspond very little, if at all, to reality. As the populace of Barclay’s holodeck program illustrates, we can “idealize” people in a positive or a negative direction. We can imagine those around us are either perfectly perfect or perfectly dreadful. Either way, we are substituting lies for truth, falsehoods for facts.

Please understand, I am not trying to blame a victim. “You’re just shy,” Geordi tells Barclay, attempting to encourage him. Barclay dismisses this diagnosis—“‘Just shy.” Sounds like nothing serious, doesn’t it?”—and rightly so. Social Anxiety Disorder is a genuine condition, and a genuine struggle for many people. I think Barclay is a victim of this disorder, and that perspective must be taken into consideration. What began as a healthy psychological defense mechanism (as Geordi allows, “There’s a side to this that’s kind of therapeutic”) has now led Barclay to withdraw so completely into himself that he is on the brink of losing his ability to function in the real world.

Or so the episode tells us. What it shows us is Barclay committing very few infractions—if showing up thirty seconds late to a staff meeting is enough to earn a grumpy talking-to from Commander Riker and one’s name a place on report, then Starfleet is a very unforgiving culture, indeed—and, while he stammers and struggles around people, exactly what he did to earn that “Broccoli” nickname remains unclear. For the sake of the plot, and for the sake of the episode’s cautionary lesson (one of the franchise’s favorites, as far back as the first pilot episode, “The Cage”) about the dangers of exchanging dreams for reality, I will accept that Barclay is a “problem officer”—but I’ll still wonder if his shipmates’ treatment of him isn’t just as much of a problem. In a sense, Geordi, Wesley, and Riker have all substituted an imaginary Barclay for the real one. Their Barclay Broccoli is perpetually the odd man out, the one who “just doesn’t fit in,” the loser. In fact, Geordi may be caught in self-absorption no less than Barclay: “I always thought I could work with anyone”—our glimpse of Geordi’s idealized vision of himself—“but I just 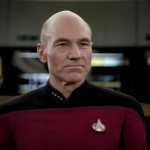 can’t stand the guy”—as though nothing more need be said. “Broccoli makes me nervous; he makes everyone nervous”—a breathtakingly quick externalization of Geordi’s internal experience.

Again, we’re all guilty. That’s why one of my favorite moments in the episode has nothing do with Barclay’s fantasy life: it’s the insight Picard shares in his ready room when Geordi requests Barclay be transferred. “It’s easy to transfer a problem to someone else,” quoth the captain, “too easy.” Picard knows that living in the real world, with real people, takes real work. (That’s why he earns the big quatloos—or would, if Starfleet used money.)

See How They Erase Holographic Simulations of Each Other!

So what does any of this have to do with theology, you ask?

Well, on the one hand, I don’t think “Hollow Pursuits” raises any issue that isn’t common to all human beings, Christian or not, religious or not. On the other hand, I do think that our Christian faith significantly raises the stakes for us when it comes to living real life in the real world with real people. Our success or failure to live with each other as the church of Jesus Christ has a direct bearing on our success or failure as his witnesses.

In the Acts of the Apostles, Luke writes that in those earliest, post-Pentecost days, “All who believed were together and had all things in common… Day by day they spent much time together in the temple, they broke bread at home and ate their food with glad and generous hearts, praising God and having the goodwill of all the people. And day by day the Lord added to their number those who were being saved” (Acts 2.44, 46-47). I suspect some measure of nostalgia for the primitive church colors Luke’s words, but I also believe they are essentially true. The quality of the church’s life together was the most powerful argument those early Christians could offer for placing faith in their risen Lord. The third-century Christian theologian Tertullian wrote that non-believers would look at the church and say, in wonder, “See how they love each other, and how they are ready to die for each other!” Jesus’ words had been fulfilled: “By this everyone will know that you are my disciples, if you have love for one another” (John 13.35).

It’s hard to love other people, though, and impossible to be willing to die for them, if you’ve substituted fictional versions of them for the genuine articles. Luckily, we Christians know that never happens in our congregations and communities, right? We’re always clear-eyed about each other: good and bad points, gifts and limitations, strengths and struggles. No self-delusion going on in our pews, right?

In the spirit of truth-telling, let me tell you about a conversation I had, early in my tenure as a parish pastor, with a much more experienced pastor. You may be shocked (just shocked) to hear this, but sometimes professional clergy gripe to each other about the congregations they serve. I was about a year into my pastoral service, and was realizing even then that I hadn’t really known what I was getting into. I had a litany of “my” congregation’s faults ready to rattle off, and rattle it off I did, growing more agitated and upset as I went on and on. I finally stopped (maybe I just needed to catch my breath), and waited for my friend to respond.

Would you believe he didn’t say, “Gee, that sucks”? Or, “Wow, what a bunch of ‘Broccolis’ you serve!”? Instead, he actually went and got all theological on me! He paraphrased something Dietrich Bonheoffer said about the church, in his book Life Together:

The community of the saints is not an “ideal” community consisting of perfect and sinless men and women, where there is no need of further repentance. No, it is a community which proves that it is worthy of the gospel of forgiveness by constantly and sincerely proclaiming God’s forgiveness…Sanctification means driving out the world from the Church as well as separating the Church from the world. But the purpose of such discipline is not to establish a community of the perfect, but a community consisting of men who really live under the forgiving mercy of God.

He looked at me and said, “Mike, you want a perfect church. No one gets a perfect church. So you either decide you can’t stand it, and move on—or you recommit yourself to it, trusting that God is there and is going to somehow do something with all of you imperfect folk, all together.”

Wise words. I took them to heart. I can’t honestly tell you I became, overnight, a paragon of pastoral charity. I know for a fact I disappointed them from time to time—for, as there are no perfect parishioners, there are no perfect pastors. And they still sometimes disappointed me. But we could, for the most part, talk about it, and forgive when we needed to, and continue to love each other. For the seven years I served them, we lived and worked and prayed and played and worshiped and witnessed together, all of us imperfect people—all of us “Broccolis.” And when the time came for me to leave them, I didn’t do so because I was lost in some more stimulating holo-simulation of a perfect church. I didn’t leave to accept a call to some First Church of Perfection, as alluring but insubstantial as photons bouncing off the holodeck walls. I left because, with clear sight God granted, I saw neither the congregation nor I could strive toward perfection, toward “the prize of the heavenly call of God in Christ Jesus” (Phil. 3.14), in each other’s company. There is no perfect church, but Christ does call us to grow in perfection—to grow toward “maturity, to the measure of the full stature of Christ” (Eph. 4.13).

Pressing on toward perfection seems a very different proposition than demanding perfection from the get-go. The perfection to which Jesus calls us is not our starting point, but our destination—our “continuing mission” (cue that Alexander Courage fanfare!), and a port of call we won’t even reach in this life. But we plot a course and move out, in fits and starts—sometimes on impulse engines only; maybe, in some blessed moments, in bursts of warp speed.

And one essential course correction is refusing to let ourselves become more comfortable with the idealized people in our head than we are with the real fellow crewmates among whom God has placed us. Sure, you can “church shop” if you like; it’s a free country. But the church is not a voluntary association: the church is the body of Christ, and we are all members of it (1 Cor. 12.27). No transfers allowed—or, really, even desirable. Borrowing Geordi’s exhortation to Barclay, we all, each one of us, need to be “out here,” not “in there.”

Sounds like a holy, not hollow, pursuit to me. Let all God’s people say, “Make it so!”

Next Time: Get ready for a timeliney-wimeliney trek to a Tasha who never was (but should have been—or should she?) with “Yesterday’s Enterprise.” Watch the show, share your insights below!