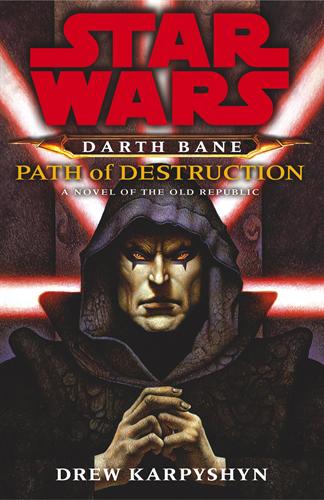 In Star Wars Episode I: The Phantom Menace, Yoda taught moviegoers something new about the Sith.  There can be only two!  Yoda explained that the Sith model was to have a Master and an Apprentice within their order, in contrast with the Jedi model of multiple Jedi Masters, Jedi Knights and apprentices along with support staff.  In short, compared to the Jedi, the Sith were  lean and mean!

Some have expressed confusion about the Rule of Two, like the Sci-Fi Christian’s own Matt Anderson; however, a reading of the Darth Bane trilogy by author Drew Karpyshyn can clarify the Sith Order.  The full trilogy Darth Bane: Path of Destruction, Darth Bane: Rule of Two and Darth Bane: Dynasty of Evil outlines the life and legacy of a key Sith Lord a thousand years before the Battle of Yavin.  It focuses on his understanding of the Dark Side of the Force that led him to the establishment of his order, which defeats the Jedi in Star Wars Episode III: Revenge of the Sith.  And though it at times it is questionable if Expanded Universe novels should be considered canon, this trilogy provides insight into the Sith and the nature of evil which can also be found in the book of Proverbs.

Darth Bane was indentified and trained to be a Sith Lord by the Sith Brotherhood of Darkness.  The Brotherhood supported equality between Sith Lords and equal voice in their struggle against the Jedi.  As Bane was drawn further and further into the Brotherhood, he began to see some errors he believed in their philosophy.  First, equality meant that the weakest among the Sith Lords were holding back the strongest.  The most powerful Sith had to take into account the weakest Lord’s opinion and could act within their own free will.  Second, equality proved to be a lie as the strongest Sith Lords were able to dominate the debates of the Brotherhood.  Third, the power of the Sith and the Dark Side was weakened as more practitioners of the Dark Side were trained.  In effect, the Dark Side was being watered down by too many wielders of its power.  Finally, Bane’s study of Sith history uncovered a troubling trend: with numerous Sith, the weak toppled the strong.  The weaker Sith began to gather to kill and depose the strongest.  Thus, the united Sith Masters were always weaker than the Jedi.

In light of this realization, Darth Bane did something drastic: he destroyed the Brotherhood and established his own Sith Order guided by the Rule of Two.  In the Rule of Two, the power of the Dark Side would be limited to two practitioners.  One would be a Master to wield the power, and the other an Apprentice to crave the power.  The goal of Bane’s order would be for the apprentice to kill the Master when he/she was weak and take on their own Apprentice.  Bane’s new paradigm reversed past Sith patterns as the strongest would always be the Master and the weakest Sith would not be able to dominate the strongest.

The Rule of Two and the Order of Bane was established as just one flavor of Sith.  It is not the only pattern of Sith orders found within the Star Wars universe, with the Brotherhood showing us a Sith model of many Masters as well.  So we should not be shocked if, in the future, we see multiple Sith on the big screen.

In short, it was impossible for collected evil to be united, and in Bane’s mind, that was an obstacle to overcome by limiting the players involved.  Bane’s own order also played up on disunity and mistrust.  Proverbs notes several times the chaotic and unstable ways of the wicked.

The house of the wicked will be destroyed,
but the tent of the upright will flourish (Proverbs 14:11, NIV).

The house of the righteous contains great treasure,
but the income of the wicked brings ruin (Proverbs 15:6, NIV).

Do not envy the wicked,
do not desire their company;
for their hearts plot violence,
and their lips talk about making trouble (Proverbs 24: 1-2, NIV).

In short, in the company of Sith is not a place most of us would want to be because whether there are many Sith or a few, death is sure to follow evil.

Evil is Self Destructive

Before he was Darth Bane, he was Dessel.  Dessel was a miner enslaved to a corporate entity who suffered through a childhood of abuse at the hands of his father and fellow miners.  Dessel was a man of his word.  He was extroverted but fiercely loyal to a few friends.   Honestly, he was the kind of man many of us would like to have as a friend.  Those qualities stood out after he entered the Sith army as a common Non-Commissioned Officer.  His unit, the Gloom Walkers, counted on him and knew he looked out for their best interests.  But after he was inducted into the Brotherhood, the newly named Bane looked into himself and wallowed in his pain.  He used the fact that his life had not been fair to increase his dark power and he became a man who only cared for himself.  Those who died in his wake were simply unworthy and those he would have protected before would be left to their own devices.

In the founding of the Rule of Two, Darth Bane selected another damaged individual, Darth Zannah, to be his apprentice.  We are shown the destructive relationship that emerges between two individuals who are deeply selfish.  In many ways, we would hope and expect their relationship to be a caring mentoring relationship as Bane teaches all he knows of the Dark Side.  Instead, it is a relationship of tension as Bane raises Zannah from childhood to attempt to kill him, with his goal of showing his dominance by stopping her in single combat.  Perhaps Zannah’s plan to kill Bane truly shows her appreciation of him, in a destructive manner, by remaining true to Bane’s ideals.

By the end of the trilogy, Bane truly has nothing because his descent into evil has been self destructive.  He has credits and power, but no one to care for him.  A Gloom Walker who spent a lifetime worshipping Dessel is destroyed by his own actions and the one person who should care for him and his legacy the most is determined to destroy him.  In short, Bane is left with a legacy of destruction for choosing to glorify his pain instead of moving past it.

Proverbs’ most prominent warning against the destructive nature of evil is:

The wages of the righteous is life,
but the earnings of the wicked are sin and death (Proverbs 10:16, NIV)

The story of Darth Bane plays out this warning.  His choices leave him alone and hunted!  And should he expect anything else, since he established a rule in which has the logical outcome is his own death or the death of his student?

As strong as Bane becomes within the Force, Proverbs would point out the error of his ways:

The righteousness of the blameless makes their paths straight,
but the wicked are brought down by their own wickedness (Proverbs 11:5, NIV).

For Bane, what he has built for himself is a house of cards that can only end when he no longer proves worthy of his Sith throne.  If and when he falls, Bane would prove to be the architect of his own destruction.

In a galaxy far far away, there was a good young man named Dessel.  He was wronged and focused on the wrongs done to him.  This inward look led to him becoming a Sith Lord–maybe one of the most powerful Sith ever.  But, his descent into evil as warned by the book of Proverbs could only lead to a life of disunity and destruction.  Have you heard the tale of Darth Bane?