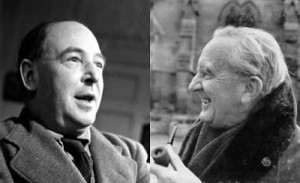 J.R.R. Tolkien and C.S. Lewis were both scholars of language and literature, Oxford professors, Christians, and friends. They might both also be considered the original “sci-fi Christians,” since both men used their considerable literary talent to create works of fantasy that witness, in different but real ways, to God. But for all they had in common, Lewis and Tolkien never wrote a book together. They planned to, but it would have been a non-fiction volume, Language and Human Nature. No doubt it would have been an impressive tome—but it wouldn’t have been what both men seemed to love best: a story.

That’s where the SFC’s contest comes in! 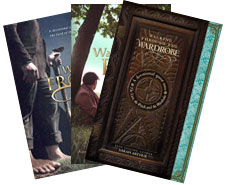 A graduate of Wheaton College and Duke University Divinity School, Sarah has written numerous resources on the intersection of faith and great stories. Some of her other titles include The God-Hungry Imagination: The Art of Storytelling for Postmodern Youth Ministry and the forthcoming Mommy Time: 90 Devotions for New Moms. Sarah is also much in demand as a speaker, and is one of the founding board members of the C.S. Lewis Festival in Northern Michigan. Walking with Frodo was the #1 bestselling youth resource in Christian publishing for the holiday season 2003. Walking with Bilbo won the Logos Book Award at the Christian Booksellers Convention for Best Youth Book 2005. Walking through the Wardrobe was selected as an official church resource by Outreach, Inc. for the 2005 Narnia film. You can visit Sarah online at www.saraharthur.info.

Entries will be judged by Sarah Pfeffer (SFC editor extraordinaire) on the basis of creativity, clarity, and conformity to the word limit. Sarah’s decisions will be final. (SFC contributors [i.e., podcast hosts and writers] and their family members are not eligible to win.)

Entries are due no later than 12:01 a.m. in your time zone, March 1. We’ll announce winners here on the SFC website and on our Facebook page Monday, March 25. (Somehow the date on which the One Ring was destroyed at Mount Doom seems fitting!)

Do not leave entries in the Comments section below—they will not be considered.

Thanks in advance for entering the contest. Have fun! We look forward to reading your story ideas for the Tolkien-Lewis epic that never was!