The voices over Serenity’s communication system began screaming the word “Godzilla” over and over again—in a tongue unused by the Alliance—and Captain Malcolm Reynolds didn’t know what any of it meant. Sitting in Serenity’s cockpit on the outskirts of the city, Mal and Jane looked through the front window to see a giant lizard-like creature emerging from the ocean in the far off distance.

“Well, would you look at that,” Mal said with a furrowed brow and scratching his temple.

“That thing must be 300 feet tall!” Jane yelled out, his eyes wide with horror. “We’re gonna die.”

“We’re not gonna die, Jane,” Mal said, turning his gaze toward Jane, grabbing his shoulder, and presenting him with a smile. “Ya know why? Because we’re pretty. I’ve said it before: we’re just too pretty for God to let us die.”

Mal turned back and saw Godzilla—as the natives seemed to refer to the beast—stomping his way through the city, knocking down buildings it towered over with ease, eating people that got in its way. They continued to watch—the rest of the crew now behind them—as Godzilla’s current trajectory seemed to align with their position.

“Sir,” Zoe spoke up, “we need to get Serenity off of this rock. Fast.”

“Well I know that, Zoe,” he turned to look at her in frustration. He shifted his stare to Kaylee. “Kaylee? How quickly can we have her flying?”

“I’ll give you two minutes.”

His crew had stopped on this strange planet to barter for parts for their ship, but weren’t quite able to finish working on it before the giant lizard waltzed its way out of the ocean, making not-so-friendly with the locals. Now the ship wasn’t even in a condition to leave the ground, and Mal needed it leave the ground.

Mal took off, walking briskly through the ship. He removed his long, brown coat and checked his pistol to make sure it was loaded. He pressed the release hatch near the entrance to the ship and waited as Serenity opened up, letting in the planet’s fresh air.

“Where are you going, Sir?” Zoe asked, standing behind him.

“I’m gonna distract him,” he said as if he’d just had the most brilliant idea.

“And how are you going to do that?”

Mal walked down the ramp—closing his eyes for a moment, thinking about the oncoming onslaught. “It’s breathing fire now, Mal!” he heard Jane yell out to him.

Mal opened his eyes and took a deep, heavy breath. “Son of a…”

Godzilla trudged a few steps forward toward their position. Mal screamed and hollered, trying to gain the giant’s attention, but it was too busy burning down everything in its path. Mal pulled out his pistol and fired it off into the air three times. Godzilla noticed this and battered its way towards Mal. The combination of its roar and stomps shook the ground like an earthquake, causing Mal to stumble as he ran in circles. Regaining his balance, he tried to get far enough away from Serenity that Godzilla wouldn’t be able to destroy it, but close enough so that he might stand a chance of returning before Godzilla could crush the life from him.

Godzilla was still at least a quarter mile away, but it would only be seconds before he caught up to Mal.

Mal ran back as fast as he could. He didn’t dare look back in the process.

“Oh God…zilla!” He cried out as he ran, massive earth-shattering footsteps gaining on him.

Serenity’s entrance began to close and Mal dove through the air to make it inside just in time. The Firefly Class ship took off—its thrusters ripping at the ground below—just as Godzilla reached them. Serenity lifted into the air above and away from Godzilla’s head, the monster swinging its arms and breathing fire upward in an attempt to bring it down.

Mal stood up and brushed himself off.

“Kaylee! Take control of Serenity! Everyone else, let’s unload.”

Mal walked back to the entrance of the ship, with Jane, Simon and River trailing behind. Zoe tossed heavy artillery to everyone and then threw Vera, a powerful armor-piercing gun to Jane.

The crew stood side by side as the door opened up to reveal Godzilla below, still trying to breathe fire at them. Kaylee brought the ship just close enough for the group to let loose a barrage of bullets and laser rounds. Godzilla roared and screamed as it was bombarded with ammunition.

Jane ran off for a moment and returned with handful of grenades. He handed two to Mal, Zoe, and River and held on to two himself.

They released the pins and launched all of their grenades directly at Godzilla. The door closed and Serenity flew away. Mal rushed to the window to look out at a burning Godzilla.

“Shouldn’t we stay, Sir? Make sure its dead?” Zoe asked from behind.

“No more we can do, Zoe,” He cut her off and she walked away.

Mal opened his eyes and took one last look at the ground, now littered with a 300 foot dead lizard. He chuckled. “Too pretty.” 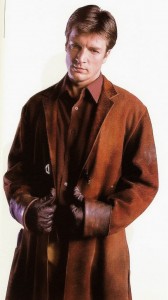 Congratulations, Jeff! Mal is headed to the finals!

The Sci-fi Christian does not own any of the characters featured in the Battle Royale.

8 comments on “Godzilla vs. Mal: An SFC Battle Royale Story”