Jason Bourne emerged from the East River unscathed from his altercation with Paz, but soaking wet and unarmed from his sudden swim. It had to have been Vosen who shot at me when I jumped off the building, he thought, reaching around with his right hand to cover his bullet-grazed left arm. It’s all over, though. They won’t find me now.

Bourne began a jog through the outskirts of Manhattan, looking for cover wherever he could. His plan now was to get out of the city through the sewer system and from there, he would devise a plan to leave the country with a new name; hoping to create a life for himself.

“Jason Bourne!” a booming voice rang out with a thunderous crack. Bourne suddenly felt disoriented as he turned around to see a menacing, muscular man standing just feet away. Wrapped around the figure’s waist looked to be some sort of Spartan-esque garb. The man was fierce—anger washed over his face and his skin was the color of ash—with a long, deep scar beginning above his right eye and crossing down to the middle of his right cheek. His grim features shook Bourne’s confidence, but the two large blades the man held in either hand made him feel even worse. Bourne was unarmed, bleeding, light-headed, and just now realizing that he was no longer in New York City.

The sheer physicality of the man—or whatever he was—prevented Jason Bourne from noticing his new surroundings. Somehow, he’d been transported to an arena, packed with a cheering audience. Bourne began to slowly back away from the gladiator in front of him.

“I am the God of War, Jason Bourne; and from this day forth, you shall live no longer,” the beast’s voice was filled with rage, as he scowled at Bourne.

“I don’t even know what’s going on here,” Bourne said furiously, scouring the ground of the arena for something to defend himself with.

“We have been summoned here to fight to the death. I will spill your blood!” He beat his blades together, creating a horrific sound of clashing steal that resonated throughout the entire arena. The crowd stood to their feet, bloodlust in their eyes and their cheers.

The dizziness beginning to fade, Bourne looked to his left as a caged door along the side of the stadium lifted open, revealing a robed figure. The newcomer took a few steps forward, threw a handgun into the pit, and turned back around. He closed the door behind him and disappeared into the shadows.

Jason Bourne immediately dropped to the ground and rolled toward the gun, just as the behemoth summoned a bolt of lightning and launched it at him. The bolt exploded right where Bourne had been standing just seconds prior. Using the momentum from the roll, he leapt into the air and fired the gun at his aggressor. Bourne landed on his side continuing to shoot until the chamber ran out, and stared in astonishment as the man deflected each bullet with one sword.

The warrior stood firm, unmoved from the assault. “I am Kratos, the God of War! Your weapons cannot harm me. I will send you to the depths of Hades!”

No longer containing any ammunition, Bourne held onto the gun, and planned to use it as a bludgeon. He ran at Kratos, having no other choice now but a close-combat fight.

“I commend your courage,” he roared, dropping his swords on the ground. “I’ll fight you with no…”

Bourne reached Kratos before he could finish speaking, extended his arm and hit him across the face with the gun. Continuing his movement, he ducked down as Kratos swung at his face, and lifted his right fist into the giant’s gut. Unaffected from the blows, Kratos closed both of his hands together in one fist and swung down fast, connecting with Bourne’s back. The otherworldly strength of Kratos’ blow was too much. Jason Bourne dropped his gun and fell to the ground, unable to move. Kratos grabbed him by the hair, hauled him to his feet and wrapped his other monstrous hand around Bourne’s throat. With one hand, he lifted him into the air with ease.

“I will use this moment here, to see you tremble and fall before me,” Kratos bellowed, shoving him down to his knees. He tried to free himself of Kratos’ grasp, but his body was too weak. Kratos smashed both of his arms into Bourne’s shoulders, dislocating them. On his knees, he screamed in agony. His head fell, arms lifeless by his side. As Jason Bourne forced his head up to look Kratos in the eyes, all he could focus on were two large swords inches from his neck. 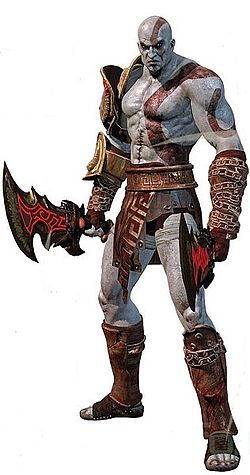 Congratulations, Jordan! Kratos is headed to the finals!

The Sci-fi Christian does not own any of the characters featured in the Battle Royale.

Jason Bourne is a character written by Robert Ludlum and can be seen on screen in the feature films The Bourne Identity, The Bourne Supremacy, and The Bourne Ultimatum, played by Matt Damon and released by Universal Pictures.

Kratos is a character created for the video game, God of War was created by SCE Santa Monica Studio and published by Sony Computer Entertainment.