A new trailer to watch and ponder as we wait for Star Trek Into Darkness‘ debut (which is, somewhat shockingly, now just shy of two months away). ( UPDATE: Apparently that screenshot was strategic marketing…!)

The exchange between Kirk and a superior officer — “Starfleet isn’t about vendetta, Kirk!” “Well, maybe it should be” — gave me the same feeling I felt watching Pa Kent, in the Man of Steel trailer, suggest that Clark should’ve let some kid on that drowning school bus die. I can only hope that, as with that snippet, seeing it in context will be more palatable: I don’t recall Kirk Prime ever suggesting Starfleet should be about vendetta. (I suppose in the original series episode “Obsession,” Captain Kirk himself came close to being about vendetta, but, as impulsive and brash as he could be, Kirk was always able to rein himself in before succumbing to the urge for revenge.)

As Lieutenant Saavik told David Marcus in Star Trek III, “It is time for total truth between us.” I still have high hopes for this film, my fellow sci-fi Christians, but I’m not prepared to give it as big a pass the 2009 outing if it punts on any attempt to deliver a morality tale. I am not saying I want it to be heavy-handed or “preachy” (such a shame Christians have let those words become synonyms); I’m not one of those fans The Onion mocked last time around, wishing for long scenes of intergalactic diplomacy at shiny conference tables. (Well, ok, sometimes I am, but not today.) I want STID to be exciting, and funny, and a thrill ride, and all-around “cool.” 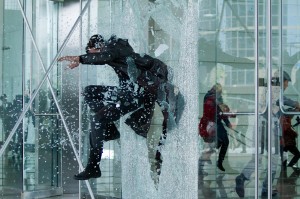 But I also don’t want a film that makes no intellectual requests of me (see, I’m not even pushing for “demands”–just a nudge or two to do some thinking here and there will suffice). I am still a fan of the first movie, but I increasingly appreciate why some longtime Trek fans think of it (as, for example, the good people at Trek.fm‘s wonderful Ready Room podcast) “Space Adventure Movie 2009.” The hard work of “rebooting” (quite cleverly so) Star Trek has been accomplished. Now it’s time for the filmmakers to make all that work worth something.

So bring on Benedict Cumberbatch’s baddie, whomever he is–he sounds spectacularly menacing and dangerous–but make him someone who causes our heroes, and us, to wrestle with big questions as much as against him. Bring on the romance–but show new Trek fans something more of why so many fell in love with this almost 50-year-old franchise in the first place. Bring on the explosions and starships falling from the sky–but please, please let the story the most special effect of all.