Welcome to the first edition of BaM! Movie Reviews (Brandon and Max Movie Reviews). Every other week Brandon and I (Max) will be reviewing a movie from Netflix, Hulu, or Redbox. Our intention is to give you a spoiler-free personal take on the film at hand as well as a section containing spoilers for those of you whom have seen the movie, or will end up watching it based on our review. This week we take a look at 2004’s Primer, written, directed, and starring Shane Carruth. Primer can be viewed on steaming Netflix and for free at Hulu.com.

Primer is a psychological sci-fi thriller about a group of four tech entrepreneurs. Toiling away in a garage, the quartet have successfully created error-checking systems for their clients. But their recent work seems to have created an unexpected and seemingly impossible side-effect. Suddenly, two members of the group realize they are in possession of a device that can double, or perhaps even quadruple, the space-time continuum of anything that enters it. What at first seems like a windfall of astronomical proportions eventually proves to be much more than they bargained for, as the duo attempt to manipulate time to their financial — and emotional — benefit.

The Time Travel Mechanics of Primer:

Let’s move on to our review!

➢ What did you think of the acting?

Brandon: Shane Carruth, who plays Aaron does a great job. His acting benefits from being the one who wrote the 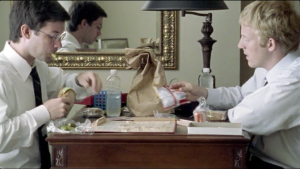 screenplay. In cases like this the writer knows how the lines should be delivered. It has been said that Carruth decided to play the lead role of Aaron himself when actors auditioning for the role put too much drama into the lines. David Sullivan plays Abe. I do not know where they found this guy. He is a great co-lead. I would say his acting is on par with Carruth’s. The acting is quick and by that I mean everyone has a fast response to the point where the characters are almost talking over each other. It is more like how people talk in real life. I would not be surprised if I found out later that the acting was improvised. The pacing of the line delivery creates an energy needed to drive the plot for a movie with no action. The short cast list (most of which were Carruth’s friends and family) makes for a more intimate film, which I appreciate.

Max: I thought that the acting, for such a low budget film, was excellent. Shane Carruth (Aaron) and David Sullivan (Abe) delivered wonderfully compelling performances. I felt as though I was watching real people react to an extraordinary situation—relaying fear, anxiety, uncertainty, and doing their best to remain level-headed. I did have a difficult time keeping up with their conversations, as the actors delivered their lines very quickly; however, I wasn’t bothered by this as I would presume that the intentionality was to create overlapping dialogue and rushed sentences in order to maintain the real-life relatability of the characters themselves.

➢ Did the low production value pan out?

Brandon: This film is truly the definition of an indie film. It was made for an estimated $7,000, most of which went to the use of Super 16mm film stock and with a crew of only six. Shane Carruth was the writer, director, producer, cinematographer, editor, and music composer as well as star of the film. The quality of the Super 16 film shows. There is grit to the quality of the actual celluloid; the saturated color palette of the movie makes it feel very vintage; occasional blips and scratches are noticeable. I feel all of this adds to the film’s indie style and theme of entrepreneurs doing what they do best. Carruth also set the story in unglamorous industrial parks and suburban tract homes in Dallas, TX. This is a creative decision that I think brings a sense of order to the film. With industrial parks and tract homes images of cubicles and straight lines especially in grid formation come to mind. A

prime example of this order in Primer is the muffin and milk shot. This has to be a quality of Carruth’s that comes from being an engineer. My only gripe about the production value is that there is one instance that takes place outside where it may have been noisy during filming. You can tell that the actors did ADR in post. The audio quality shifts from the audio they picked up on location and the ADR audio.

Max: I don’t think that the low budget detracted from the movie at all. In fact, I am glad that it was created with such a low cost—adding to the realistic vibe of the film. I was transported into the film; I was spending time with these men; I was right alongside them creating, planning, and adjusting. I wasn’t watching a spectacle, I was participating in a learning experiment.

➢ What are your thoughts on Carruth’s time travel mechanics?

Brandon: Shane Carruth was a math major in college and an engineer before he became a filmmaker. This certainly helped him in the writing of the “technobabble” that comes with engineers talking to each other. With this engineering experience he makes the mechanics of time travel feel plausible, not impossible.

Max: I’ve heard all sorts of time travel theory before—fixed timelines, dynamic timelines, the multiverse, among others—but this seemed fresh and original. I was thinking the whole time that this film made it seem like a possibility rather than science fiction.

➢ Is the story compelling and engaging?

Brandon: Primer feels very original. Sure we have seen the engineer/scientist archetype who builds a time machine in their garage before. But I think the originality comes from the fact that this is one of the rare sci-fi films that have no special effects. The absence of effects and the mechanics of time travel truly ground the film in reality. I also liked the way the film handles subjects like causality (affecting the timeline when two versions of the same character exist) and time traveling

for financial gain. From pretty early on in the time travel experiment I lost track of which versions of the characters the movie is following scene by scene; but that is okay. If you feel lost after the first viewing, just know that that is how you are supposed to feel. Carruth intentionally muddied the film’s plot to mirror how confusing time travel really is. This is a film you need to see three to six times before you can really comprehend all that is going on.

Max: I will say that for the first ten minutes of the film, I was bored. There wasn’t much going on, just a lot of conversation and arguments regarding the project the men were working on: what’s wrong this time? How should this be fixed? Can this be purchased with the current budget? I was literally dropped into the middle of a pre-existing story without any clue of what was going on (other than the synopsis) and expected to just move right along with the character. Well, after the first initial ten minutes, I was on board. I was enthralled by their progression, enticed by sudden developments, and immersed into their world.

HAND OVER THE SPOILS! (Spoilers)

➢ What are some of your favorite moments or things that stuck out to you?

Brandon: “Are you hungry? I haven’t eaten since later this afternoon.” I love that line. The line itself gives you a sense of non-linear storytelling. One of my favorite scenes was the montage of Aaron and Abe going through all the prep before time travelling. It was in moments like that that I felt the character’s anxiousness to time travel. I also enjoyed the concepts of handwriting deterioration, disposing of doubles, having to re-enact conversations that had already happened by listening to what was said through an ear bud and figuring how cell phones work.

Max: The moment that drew me into the film and had me thinking, “Okay, maybe I won’t fall asleep,” is when Aaron and

Abe are working on their device in the garage. Aaron turns it on and Abe places some paper shavings over it and the paper begins to float. Simultaneously, Aaron, Abe, and I all realized that continuing on would not be a waste of time. I also loved this quote from Aaron:

“But the worst thing in the world is to know that the moment you’re experiencing has already been defined.”

To me, this encapsulates the hardships that can come from tinkering with “something” that doesn’t belong to you. In Primer’s case, its time.

➢ What do you make of the last scene of the film?

Brandon: I believe Aaron was in France based on the French translator standing next to him where he was supervising the construction of a room sized time machine box. I believe this version of Aaron is also the one who provides the voice over narration for the film.

Max: I am on the same page as Brandon. I also believe that with his last line, “And if you look, you will not find me,” the narrator, or Aaron, is counting on the fact that he is so engrossed in this new life of time travel, with an increasing understanding of how the whole journey works, that he will be untouchable (or at least the version of himself that is speaking at the moment).

Brandon: I loved this film. This is not your regular summer popcorn blockbuster time travel movie. It is deep and 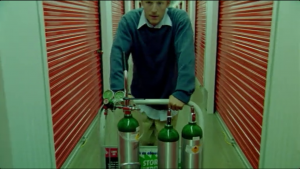 should spur on discussion of theories. This film is a great example of a great director just starting out like Christopher Nolan with his film Following. While the look of the Primer does look like a first movie that is certainly not a bad thing. If Upstream Color, Carruth’s latest film that just made its way through the film festival circuit, is anything like Primer I just may have to follow his whole career as a filmmaker.

Max: I really enjoyed Primer. It made me think and pause—literally I had to pause the movie multiple times to try and grasp what was taking place—and continue to think afterwards.