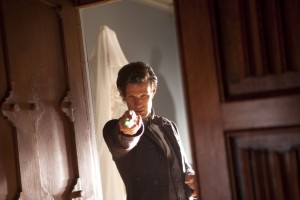 I don’t count either of Neil Cross’ Doctor Who scripts among my favorites, but they make me think!

In his “Who Review” of Cross’ first episode, “The Rings of Akhaten,”  Ben Avery took issue with the Doctor’s speech about the Queen of Years’ unique value, a speech that was, for me, that episode’s highlight. Ben argued:

This is humanism at its richest and fullest… and saddest… Everything in the universe is special. Everything in the universe is unique. Everyone who has existed, does exist, or will exist can lay claim to the same level of value. But the question is: who does the valuing? Who appreciates the value? The Doctor? Perhaps. In the real world, though, the only hope that comes from the idea that “everyone is special and unique just like everyone else” is if you have someone (perhaps Someone?) who can appreciate the value… The empty universe of the atheist and the humanist, ultimately, is one in which human life has very little value compared to everything else…

While I agree with his theological conclusion—namely, that humanity’s value ultimately rests in the truth that God values us (Psalm 8)—something about how Ben put his point bothered me. I’m unsure what my reaction’s all about (and Ben was patient and let me litter his site’s comment field with attempts to articulate it), but it may be this question:

Are the Christian’s and the humanist/atheist’s claims about humanity’s worth mutually exclusive?

I affirm God created humanity in God’s own image (Gen. 1.27). I also accept the scientific hypotheses underpinning the Doctor’s “stardust speech.” Both narratives speak to the fact that something exists, that we live, when existence and life were not foregone conclusions. I think the “how” of the “stardust speech” and the “what” and “why” of Genesis go hand-in-hand. And while the “how” by itself is incomplete, I find myself appreciating it as beautiful, so far as it goes, and loathe to label it “sad” and “empty.” It doesn’t say all that needs to be said—but it says something that very much does need to be said, in a world where we seem all too quick to dismiss and devalue one another. 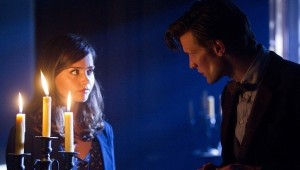 “The Only Mystery Worth Solving”

Cross returns to the theme of humanity’s value in “Hide.”

Most of this episode was über-Gothic parody—the lightning! the thunder! the candles! the mansion on the moors! the “ghast”!—and much of the rest was an extended trans-dimensional race against time that made little sense, even after repeated viewings (Emma opened the reality well for Clara and the TARDIS, is that it? And the TARDIS more or less just decided it could stand the entropic strain of the echo universe after all?). This week’s offering grabbed my attention when Cross revisited the question of what, if anything, makes human beings special.

“We all are ghosts to you,” Clara says to the Doctor, a blend of accusation and lament. “We must be nothing.” The Doctor reassures her that she has not reached the correct conclusion. “You,” he says—and I think he means “you” both singularly and plural—“are the only mystery worth solving.”

The moment reveals the heart of the Doctor’s obsession with Clara’s origins. In her admittedly unusual way (showing up, not unlike trapped time traveler Hila Tacorian, at various points throughout history), Clara personifies something true of all human beings. We are all, not ghosts, but mysteries to each other. I’m not saying we can’t ever really know another person… but even the people we know best in this world do remain other. We are not them. They are not us. Even with parents and children, spouses, best friends, there always remains a degree of distinctiveness that can’t be overcome.

Far from being bad news, our distinctiveness means there is always more to learn about each other, always more to discover, to appreciate. We do not live in relationship with someone and, after a certain point, decide that we’ve got that unique individual who really exists all figured out. Instead, we continue the relationship. We live and interact and love. We reveal more of ourselves to them; they reveal more of themselves to us. Maybe this is what the Doctor means when he advises Emma and Professor Palmer, “Hold hands… and don’t let go. That’s the secret.” It is not good that any of us should be alone (Gen. 2.18). 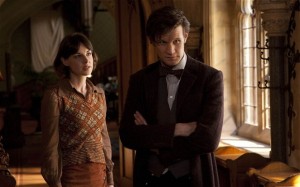 The Doctor, of course, never really practices what he here preaches. Because he is so thoroughly alien and alone, he will never “solve” humanity. Of the creature in the pocket universe—identified, intriguingly, with the nursery rhyme sobriquet “Crooked Man” in the credits—the Doctor says, “Every lonely monster needs a companion,” apparently oblivious to how his words might apply to himself.

This episode reminded me that the Doctor is, in many ways, a tragic figure. He is a “crooked man”—not evil, but bent, malformed. Emma is right: that “sliver of ice in his heart” keeps him from being fully trustworthy, not because he is malicious, but because he refuses to “hold hands and not let go.” He isn’t honest with others—remember River Song’s first rule about the Doctor? Speaking of River, he didn’t really marry her—he was “a Doctor in a Doctor’s suit,” and he withheld his name from River at the moment it should have been demanded from him. He doesn’t keep in touch with past companions—except when he tried to, with Amy and Rory, and he’s not likely to want to put himself in so vulnerable and painful a position again. Yet “holding hands and not letting go” demands vulnerability, and the possibility of pain.

On the other hand… the Doctor delights in humanity. He still announces to any and all threats that the Earth and its people are under his protection. He may never “solve” the mystery of humanity, but for all that he doesn’t fully engage, he also never fully withdraws. For him, humanity is the only mystery worth trying to solve, even if that solution can never fully be reached.

So it is with us. We are mysteries to each other, and, often, to ourselves! The only person to whom we are not a mystery is our Creator. Only by God are we “fully known” (1 Cor. 13.12). Only God can ascribe value and worth to us on that basis.

For our part, until we no longer see as in a mirror, dimly, we must count each other valuable simply because we are here, with each other, in this world that didn’t have to exist but does. We must hold hands and not let go. We must live in the mystery. And that, I think, is not empty or sad, but deep and rich, and worth much.