Not even the Doctor can make the specter of war too much of a romp. 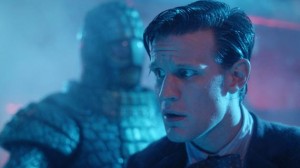 I know the Ice Warrior is an old Doctor Who monster, but I haven’t seen any of its previous appearances, and I deliberately chose not to study up. I didn’t want possible continuity concerns standing in the way of what I hoped would be (based on the clip I did watch beforehand) an exciting, even amusing adventure. If you’re looking for praise or blame regarding how the current series reintroduced this classic adversary, I don’t have any to give.

On his own terms, I did like Grand Marshal Skaldak a lot. While I wouldn’t call his characterization “rich,” both Mark Gatiss’ script and the amazingly talented Nicholas Briggs’ voice-acting save Skaldak from being a one-note “monster of the week.” As he remembers standing by his daughter in battle, singing “the songs of the old times, the songs of the red snows,” Skaldak is genuinely sympathetic. When he grabs Lieutenant Stepashin with those wonderfully creepy claws of his and repeats, with disdain, the hawkish officer’s talk of a “cold war” and “mutually assured destruction,” he is satisfyingly menacing. His refusal to bend (as many of the Time Lord’s foes seem to) before a verbal barrage from the Doctor at the episode’s climax—“Which of us shall blink first?”—sold him as a battle-hardened warrior, driven by pride, anger, and grief, all at once. If fact, I think this alien embodied the costs of war far more effectively than any of the episode’s human characters, and I wouldn’t mind seeing him return.

Speaking of underdeveloped human characters, I was disappointed by David Warner (Time After Time, TRON, Star Treks V and VI, among other genre credits). My wife had to explain to me that the Professor was attempting to distract and calm Clara during the “Tell me about yourself” scene; either the acting or the writing were so sloppy, or a combination of the two, I suspected he was interrogating her for some nefarious purpose to be revealed in a last-act twist that never came. An amusing enthusiasm for Duran Duran and Ultravox does not a complete character make.

Liam Cunningham conveys appropriate gravitas as the submarine’s captain, even if his bearing and beard do both overtly channel Sean Connery in The Hunt for Red October. I may be wrong, but I think Connery’s character also begins a crew-rallying speech with the phrase, “Comrades, you know our situation.” If only this sub’s crew had burst out into a rousing Russian number! On the other hand, I liked the moment when the captain, knowing full well the answer, asked whether Skaldak wouldn’t smell the Doctor as a solider. We don’t get many reminders that Matt Smith’s Doctor, just as much as Tennant’s and Eccleston’s, is a living casualty of warfare (although he did himself just give us one last week).

“Well, I don’t smell of anything, to my knowledge!” Jenna Louise-Coleman continues to deliver nice moments as Clara. I am glad the Doctor, albeit after much pushing from Clara, affirmed her for volunteering to be the one to speak to Skaldak. She may, as she pointed out, have been the only remaining choice, but she accepted that reality with an eagerness to serve I’m not sure many people would muster in such a situation! Unfortunately, as the episode wore on, we saw her yet again shoehorned (unsuccessfully this time around) into stereotypical companion mode (see the aforementioned “Tell me about yourself” scene: why should this person who so recently demonstrated fearlessness now be showing fear?). She’s also given an Amy Pond moment (seemingly inspired by Amy’s “talking down” of Bracewell in “Victory of the Daleks” [5.3], another “historical” military episode) as she appeals to Skaldak’s feelings about his dead daughter. Whether she would have succeeded remains unclear, since Skaldak’s fellow Ice Warriors arrive at that moment—yes, the episode established early on that he signaled for them, but their timing still felt convenient and contrived to me.

I didn’t find “Cold War” to be either as exciting or amusing as that advance clip made me think it might be (the Doctor bursting out of the TARDIS onto the panicked bridge of a sinking sub and shouting, “Viva Las Vegas!” is still a great bit, though). It was a skimpy forty-five minutes—surprisingly so, considering that the threat of nuclear war between the U.S. and the U.S.S.R. felt quite real, sometimes even inevitable, in the early 1980s. It did to me, anyway. I was 11 years old in 1983, the year a Soviet interceptor shot down Korean Air Lines Flight 007, and the year ABC aired The Day After miniseries to great controversy (and big ratings). Fears about mushroom clouds didn’t dominate my childhood, but they occasionally overshadowed it. Seeing the tension of the global superpowers’ standoff enacted in microcosm between Skaldak and the Doctor didn’t help me think about those years any differently, or suggest any new insights into their deeper meaning.

That might be asking too much of even Doctor Who, however. What new insights into the threat of war can there be the human race hasn’t already been shown, at great cost and with deep pain? How differently do we need to think about war when we already know what a sinful waste it is, no matter how justified we think any particular conflict might be?

And for those who are people of faith, as we continue to live when wars and rumors of wars persist, what new wisdom could possibly add to or eclipse the ancient, godly wisdom passed on by the psalm-singer: “Depart from evil, and do good; seek peace, and pursue it” (Psalm 34.12)? What more do Christians need to hear than the call of our Lord to live as peacemakers, “for they will be called children of God” (Matthew 5.9)?