The Doctor Who crew inexplicably “phones in” the beginning of the fiftieth anniversary season.

How fitting that the title of Doctor Who’s mid-season premiere refers to a telephone call—the episode feels “phoned in” on several levels.

It’s not that “The Bells of Saint John” was bad. I laughed at several moments (I thought Clara’s quip about Twitter was brilliant, if not the plot point the script asked us to believe it was—quipping about computers requires no great knowledge of them). I thoroughly enjoyed watching the TARDIS materializes in the rear of a passenger airplane, culminating in the Doctor’s (nearly) crash course in flying a jet. And I appreciated the return of the Great Intelligence. I’m looking forward to seeing this malevolent mind behind last Christmas’ snowmen as the Doctor’s nemesis (though, sadly, no longer voiced by Sir Ian McKellen).

The story and its elements would have been more entertaining, however, had we not seen them many times before in modern Who (and, I suspect, the classic series, too, though I have no in-depth knowledge of the pre-2005 canon). Steven Moffat’s script chose a noble theme: the dehumanizing tendency of technology, especially its ironic effect of further isolating the people who seek to use it for connection. So many of us plug into our personal devices and log on in search of a network only to end up echoing, at some level, the plea of the people fully integrated into the Great Intelligence’s cloud: “I don’t know where I am.”

Instead of ringing some masterful and novel changes on this theme, however, as his fans know he is fully capable of doing, Moffat here seems content to simply plunk out a simple tune, composed of notes he’s lifted from his own and others’ work on the modern series. The absorption of people’s identities (“souls”) via ubiquitous tech (“The Long Game,” “Rise of the Cybermen/The Age of Steel,” even last fall’s “The Power of Three”); the Doctor fighting technological fire with fire (“The Eleventh Hour”), doppelganger Doctors (“The Almost People”), children at the top of stairs who lure people to their doom (“The Lodger”), even the image of human faces atop inhuman bases (“Silence in the Library”)—it was all so familiar. Seeing Matt Smith’s Doctor as the romantic “pursuer” as opposed to the romantically pursued made for a small but nice twist, but even he seemed to be bored at times (the café conversation with Clara felt interminable, matching none of the chemistry these two actors shared in either “Asylum of the Daleks” or “The Snowmen”). I went away from the episode feeling it had been done largely by the numbers, and hoping the rest of “series 7B” won’t follow suit. 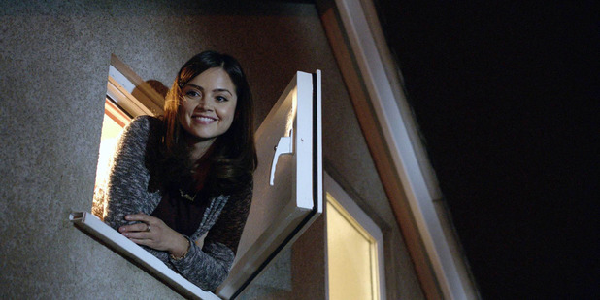 Most disappointing of all, however, was the introduction proper of Clara as a companion. I had hoped for so much more! Not that Jenna Louise-Coleman doesn’t adequately handle the material Moffat gave her; she does. But what she’s given diminishes her more than it enhances her.

To be fair, we do see at least two positive attributes in Clara. First, she is empathetic, kind, and loyal. I think her devotion to Angie’s grieving family is admirable. The Doctor correctly commends her for not “run[ning] out on the people [she cares] about.” As Scripture says, she weeps with those who weep (Romans 12.15). Second, as I indicated earlier, Clara is not going to be swooning over the Doctor any time soon. I enjoyed her teasing (flirting?) remarks about the Doctor and his “snog-box.” She knows, seeming instinctively, how to get under the Doctor’s skin, and it’s clear she will enjoy doing so. But her insistence that the Doctor, in effect, woo her away rather than sweep her off her feet also speaks to her self-confidence. I believe her when she tells the Doctor she’s still going to see those 101 places listed in her travel book from childhood. (Incidentally, did anyone else notice that ages 16 and 23 were missing from the list of ages she wrote on the blank verso of the front free endpaper? Production oversight, inconsequential detail, or something else?)

Still, I find it hard to praise the “real” Clara too highly (on Doctor Who, one never knows any more who is real and who isn’t, or, indeed, what “real” means) when compared with her previous incarnations. Gone is the fresh, funny, fully realized ancestor (presumably?) from “The Snowmen,” who was every bit the Doctor’s equal. Nor is this Clara the smart and sassy soufflé-baking Oswin from “Asylum of the Daleks.” The real Clara is pretty and pleasant, but not a computer whiz, either natural-born or self-trained. Her hacking skills are the residual (and, the script suggests, temporary) effect of her partial upload to Miss Kizlet’s wicked wi-fi cloud. We are told she is naturally clever, but we don’t see much of that cleverness on display. No, we don’t see her being foolish, either—Clara doesn’t fit the stereotypical mold of the vapid, screaming companions of decades past—but she spends much of the hour as the damsel in distress. (The episode even took away Victorian Clara’s marvelously novel reaction to the TARDIS—“smaller on the outside”—in favor of a more standard approach.) The imagery of the Doctor keeping vigil beneath her window (in itself a touching notion, but problematic in context) and literally riding to rescue her from a dark tower only reinforces the overwhelming impression of passivity surrounding Clara. 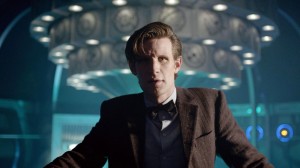 The Doctor’s last line, heavily touted in previews—“Right then, Clara Oswald, it’s time to find out who you are”—seems to me Moffat’s tacit acknowledgment that this particular story has told us precious little about the new companion. No doubt Moffat thinks he has given us enough to keep us interested as the Doctor unravels the mystery of her identity over the next several weeks, but people are more interesting as individuals than as puzzles to be solved. Right now, Clara feels more like a puzzle than a person.

Incidentally, other observers raised the same complaint regarding Amy Pond. I didn’t then and don’t now think that’s a fair summation of Amy’s character, but I do now have a better appreciation of their perspective. How frustrating to watch a character—especially, in this case, one whose other “incarnations” have led us to believe she will be someone really special—reduced to a cryptic cipher! In fact, given the detail—which I missed entirely on the first viewing—that Clara’s beloved childhood book Summer Falls was written by one “Amelia Williams,” combined with the fact that Victorian Clara knew to choose the word “pond” as her response to Madame Vastra’s single-word test in “The Snowmen,” Clara may be subsumed under Moffat’s all-encompassing Amy Pond story arc before all is said and done. I will always have a soft spot for Amy as “my first companion,” just as Matt Smith will always be “my Doctor”—but I agree with those fans who say it’s really time to move on.

“The Bells of Saint John,” while entertaining, won’t be ringing in my ears too long. Fortunately, Doctor Who has a chance to play a new melody this weekend. (Not, I trust, Melody Pond—though just who was that “woman in the shop” who gave out the Doctor’s number as the best helpline anywhere, hm?)